Games You Played Today VI (III in the west)

Continuing the discussion from Games You Played Today V: The Phantom Play’n - #2029 by physical.

(parkers post in the last thread i was responding to)

a day in Arma is 4 hours and 48 minutes because we play at 5x time acceleration and a session is usually a little over 3 hours. so we were easily crawling around in pure darkness for 90 real minutes, it was a nearly 3km journey to the objective on foot. 1.8km of crawling!!

At one point we were less than 30 meters away from enemy tracker units flanking us on both sides. These are distant helicopter searchlights poking through the canopy of the jungle. 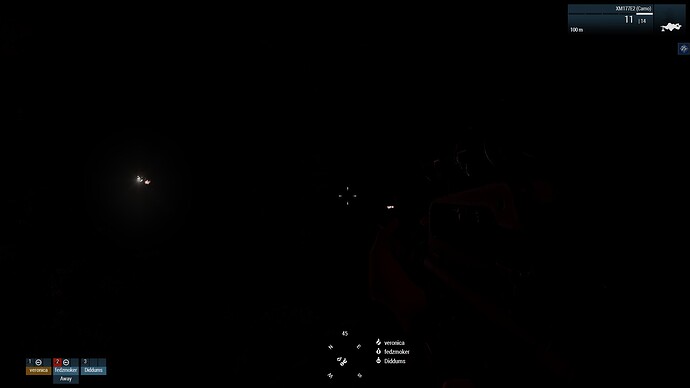 Originally our plan was to land briefly at a fake LZ to make it look like we were getting out there, and then proceed to the real LZ for the actual drop, but the CIA was testing some kind of airborne pathogen today that made all of the helicopter pilots paranoid and delusional, causing them to ascend endlessly up past 3000+ meters and then do circles until they ran out of fuel. Great weather we’re having outside MARK BUCKMASTER!! It’s getting a little cold in the unpressurized chopper going up to 20,000 feet!!! 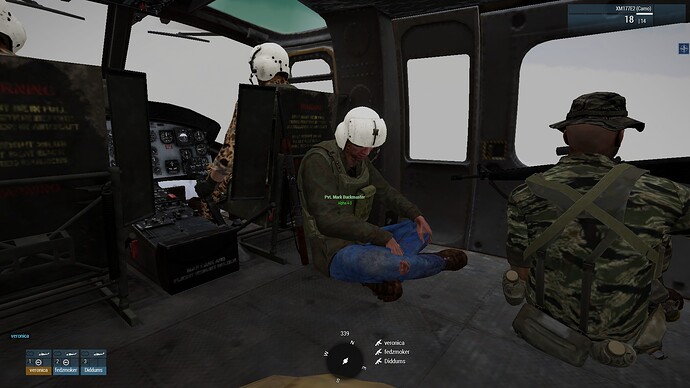 so I had to force my way into the cabin and commandeer the Air America chopper we were taking to Laos (see bottom of my post) instead, because thankfully im a decent pilot, but it took like fucking 20 minutes of wrangling so we had to abandon our diversion and land directly in the Shit - we spooked some civilians who ran off, and got into a fight with a Pathet Lao patrol almost immediately. as we continued towards the objective a tracker team arrived from the LZ hot on our tail, me and parker rained grenades down on them which forced them off for a bit and let us move. There was this big village named Com Ngon between us and the objective that I chose to avoid because it was the most likely place for troops to be leaving from to investigate all the shooting. In the middle of the night we ran into an empty ammo truck on the road with two dead american guys near it lights on and my friend ran up to the bodies and immediately set off a mine because, well, obviously it’s a trap. People dont park on the Ho Chi Minh Trail at 3am and then get filled with holes by a ghost, after all. despite that devious trap, the two helicopters searching for us, and the ground teams we still got to the objective in time for an early morning raid, which was a success, besides us accidentally carpet bombing the one building containing a hostage in it, of course!

anyway after that we had to take a landing site that was a little to the north of the original objective, criscrossing through a jungle corridor filled with traps and exploding bicycle traps (???) but the game was bugging the fuck out by this point and the helicopters still didn’t work (we’ve been playing a pre-made dynamic mission so I can play the game more and do less work, but as a result stupid shit like this happens, this motherfucker is gonna PAY when he sees my masterpiece hickey & boggs crime RP mission im developing) so it was kind of a nightmare, this time I tried to save us by teleporting us to the base and it worked for a second until we were ripped back into the ascending chopper of death, the pilots jumped out and then i teleported us again in freefall so we all died instantly but in the right place EXCEPT for cameron who inexplicably went AUUUUGH and rolled over good as new. That’s why the chief is skydiving in parker’s post. All this to explain that!! 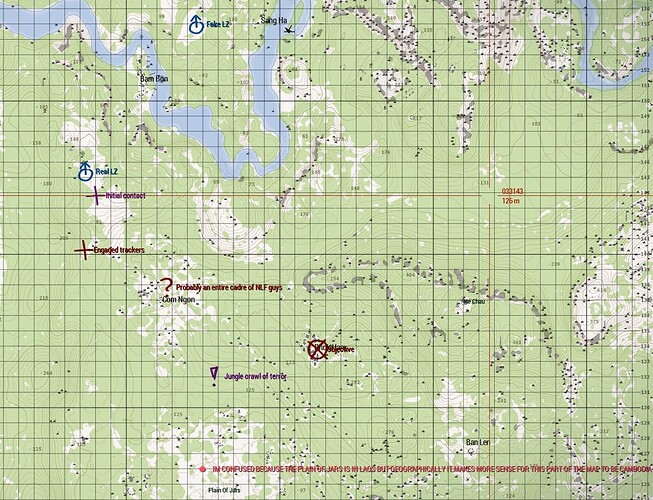 Games You Played Today 360 with Kinect

The ghost of hostagekiller still haunts you

I finished the first Danganronpa last night, so…

Games You Played Today VI (III in the west)

so, my brother and i got a PS5 digital from my parents for xmas - was a surprise gift and i really didn’t know how i felt about it at first. was like “well, what am i even going to do with this lol”

i’ve been uninvolved in the console space for a long time. when i moved out from my parents’ house in 2007, i didn’t bring any of my consoles with me, and stopped playing games almost entirely except for playing through final fantasy xii on my roommate’s ps2 in mid/late-2008. i later got a wii and hacked it in about 2009 or so, and eventually had access to an xbox 360 when i moved back in with my parents in 2012.

i did get really wrapped up in speedrunning and retro consoles around 2017, but this never extended to anything past the wii. even when i was gifted a refurbished wii u from gamestop in 2018, i only really had it out long enough to hack it - barely played anything on the thing and put it in a box after a month rather than let it collect dust.

so, entering the playstation console space has been very interesting for me. i ended up not buying any games whatsoever for the PS5 and intstead paid 120 USD for the year-long PS+ Premium - there are 3 tiers, Essential (formerly just called PS+), Extra (includes a game-pass like Game Catalog), and Premium (includes PS1/PS2/PSP games, a streaming catalog (including lots of PS3 games), and 2-to-5-hour game trials). there are so many games from the last 3 generations that i’ve never messed with due to being console-avoidant for so long. i don’t know if it’d be as good of a deal for anyone else, but in my specific circumstance i couldn’t be more pleased with the premium tier - i’ve been able to play nearly everything i’m interested in without paying for anything individually

i’ve been really having fun with the PS5. i’m surprised at how much i missed gaming on a console - it really does have a very different psychological feel to it. when i play games on PC, it only happens when i’m really motivated to play, and always with specific games. i don’t get on steam and “look for a game to play” - haven’t done that in years. as a result, i pretty much just don’t game very much on the PC.

i really like the PS5 - being able to access the whole library of PS4 titles is huge. i love the controller - only criticism outside of the potential for stick drift (mine are fine for the moment) is the batteries still drain way too fast. otherwise, great pad.

the UI on the PS5 is… OK. it’s confusing to navigate, but i’m starting to get the hang of it. less forgivable is how barebones the store is. there need to be better view options, better filtering options, better sorting options, options to view developer/publisher pages, more detailed information about hardware support… right now it’s a mess.

the PS+ Premium tier is kind of questionable. sony needs to add a lot more PS1/PS2/PSP games, imo, they are really kind of slacking on that front. feels like a nintendo-esque dripfeed - there are so many titles that could be here, but for now it’s not particularly robust.

the streaming stuff is passable. i have fiber internet and sometimes it works pretty well. don’t expect miracles, but i was able to have fun with games like Deception IV: Nightmare Princess over streaming without many complaints. trying to stream a fighting game or shmup will probably not go so well. also, there’s no Metal Gear Solid 4 and no Demon’s Souls - big oof for not having those two. sort of hidden in the “classics” list are some PS4 remasters that you might not see if you are just browsing monthly games and the game catalog - sneaky!

with the premium tier you can also stream anything from that particular list to a PC. nice bonus.

since i have no way to use discs on my digital edition console, i’ve fully embraced the ephemerality of the moment. i am gonna try and hold out on buying games as long as possible and keep riding the catalog for now, but this may only last until EDF6 comes out in the west lol

overall i think the PS5 is a really strong platform, been having an utter blast with it

yeah i think coming into the PS5 without having had a PS4 is probably the best way to do it. was fun to find your friend request the other night

Treating myself to the Demon’s Souls remake Xmas 2021 was a fine way to embrace the industry shutdown over the period, but it wasn’t until I experienced Death Stranding a month later where I found myself truly accepting of the piles of money I threw down on PS5 ownership in the first place

Almost embarrassed that I haven’t plugged-in my Series S since the day of purchase although I can instantly access Ninja Saviors Once Again in an instant, and that’s hard to fuck with

I guess I could have my company pay for a PS5…

In The Divine Force, I’ve introduced antibiotics and weaponised flight to a medieval planet, and it has immediately threatened war due to the resources required to create them being limited to one region of the planet. They also introduce the concept of masks and the existence of microorganisms, and it feels like the writers were particularly shut in during Covid. One of my party members is an advanced android and is basically smarter and more knowledgeable than the entire planet

The cutscenes in the mid-section really pile up and I managed to get 2 trophies, ten minutes apart, without even touching the controller. Usurpation of the king, thrown in prison, forced into marriage, regroup and escape, try to deceive the empire into peace with a false wedding, escape. So many cutscenes.

And yet I’m 75% through the game in 10 hours thanks to playing on easy + liberal skipping of side content. The story is just enough to pull me through, but it really is ‘how much can people fuck up the prime directive for personal gain’. The space police finally show up and then commit further prime directive violations lmao. Kinda shows how difficult enforcing such a rule really would be.

The game has that degree of cutscenes which is below prerendered, animated in-game action, all the way down at mannequins placed opposite one another taking terms to flap lip. Having like 13 characters in each scene makes things messy as they all compete for a line, but it trundles on well enough.

Honestly, it’s been kinda nostalgic playing a game which was clearly made on a tight budget while not being completely tiny in scope or outright jank. The game balance and plot affordances clearly show where shortcuts were made, and it feels very PS3 era except it is trivially easy to minmax damage and just sprint through the MSQ. If it weren’t for the prime directive plot framed from the perspective of the underdeveloped planet, I think I would’ve been done by now. Star Ocean is weird.

the PS+ Premium tier is kind of questionable. sony needs to add a lot more PS1/PS2/PSP games, imo, they are really kind of slacking on that front. feels like a nintendo-esque dripfeed - there are so many titles that could be here, but for now it’s not particularly robust.

The worst thing about the PS+ re-launch was the gutting of PS Now into PS+ Premium. They removed a few hundred games I think, and some of those removed games are being added back as the monthly PS+ Premium update for all the new subscribers who don’t know any better. I don’t know what the catalogue is like now but it used to be b-game heaven and KoeiTecmo central. Play all the Dynasty Warriors you want.