As @jodeaux pointed out, we could use an itch.io recommendation thread. There’s a lot of cool stuff on itch.io and sometimes it’s really hard to find! The site rules and you should probably buy stuff through it rather than Steam if you’re gonna buy games that are on both. There’s a ton of cool free stuff, too. The site does rule, but it tends to promote the same narrow band of (really good, typically) games and creators, so let’s share among ourselves some of the neatest stuff we’ve found. I’ll start in a sec.

EDIT: I would be ok if you wanna post stuff from GameJolt in here too.

It definitely seems less indulgently gloomy than their most known work; I still haven’t actually played it

I think people know about how great qrostar games are from a puzzle game thread, but seriously. I adore Hanano Puzzle 2.

Terry Cavanagh’s Naya’s Quest is a brief but really deep exploration of a neat mechanic.

Go to the edge of the world, and see the truth.

one night, hot springs is an adorable visual novel about a somewhat awkward visit to a hot spring 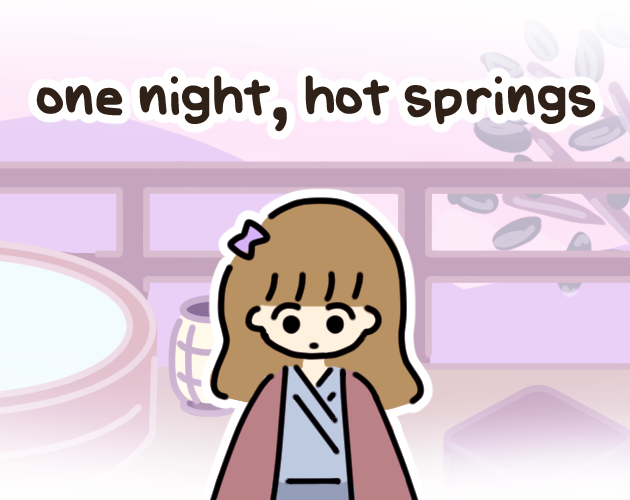 one night, hot springs by npckc

a young transgender woman goes to the hot springs.

WilliU: The Big Getback is stylish as hell and feels so cool and fun to play. And it’s cute. (paid)

Queers in Love at the End of the World is my favorite anna anthropy game and my favorite Twine game. I wrote (a lot) about this one.

Clutch is both a bit tedious and an absolute joy to play. I love being in the low poly, flat-colored world of birds this game puts me in. (paid)

I really like Frances’s All Alone in a Small Island. It does something really neat with a Harvest Moon-lite-like premise (I wrote about this one).

All Alone on a Small Island by frances

Wait, how do you make the good previews stick around? Mine turn into big empty black boxes a second after I post them.

they look fine to me

I played a bit of this at MAGfest one year and while I couldn’t grasp all of it’s rules it was very neat. The screen is split vertically in half for the two players and you’re both racing into the background, outrun style, doing laps on a course. But simultaneously there is a ball that travels back and forth across the 2D plane of the screen (it exists out of space- how spooky!) and you’re need to move your character to hit the ball back towards your the other side of the screen, hoping to score a goal like Pong.

But since you also appear in your opponent’s view on their half of the screen you can even hit the ball there if you position yourself right. You’re juggling a balance between your movement and speed for the race and you’re focus on trying to hit the ball. I never figured out how points worked between the race and ball but it was real interesting. You’ve also got an assortment of Windjammer style special moves and abilities.

But I especially loved the menus, with it’s large and striking text, uniform color, and minimalist design.

I like Naya’s Quest as a packaged failed design; you can see him scraping together the best bits of isometric perspective puzzles and realizing that he quickly exhausts the possibility space, and you feel that determination to still put something out as a proof of work and warning away from the space. I respect it a lot.

A game about colliding and merging balls

That sort of transparency is something I appreciate from indie games; the design elements really shine through, whereas a lot of triple A games are more muddy to me (the core design can get smoothed over with art or music or story or setting). Probably a reflection of my inexperience as a designer, too, but I feel like I have a better grasp of the design work that went into a indie game.

I think even more than music and art, more and more systems sit on top of AAA games, and those tend to be traditional, so any problematic system or mechanic in its own right is just a cowlick on an otherwise military-spec head of hair.

I appreciate the cleanliness of small games that are about something rather than platforms that support a dozen different fantasies, too.

I went through an emotional rollercoaster a couple weeks back. I finally bought a 360, only to find that the number one game I wanted to play—Crosstown by our very own @luvcraft —was no longer available. Heartbroken, I nearly chucked it off my balcony. While trying to determine what happened to it, I found that it was available on itch.

It’s really cool. C64 Crossroads remade with a bunch of more cool gimmick monsters that do cool stuff like rearrange the maze. Perhaps the game of the decade.

Hey! i just wanted to make a thread about this. Now I have to take part in this one. Gonna recommend some games, and I can promise that it’ll be a very good time for all of us.

Gotta play some games first. All the ones I was gonna say are taken.

A small metroidvania about a flying house

I love The Sky House and its magnificent X button, but I may never be good enough to finish it.

This game may be terrible for all I know, but I always thought it looked interesting.

Strawberry Cubes is legit. its tite. i’d recommend giving it just a glance if you can