I feel that, Sliders was terrible in so many ways. It was like a reverse of the Simpsons, where all of the lore building was done in the attempt to rush towards a big finale on what was essentially a completely episodic show for the first several seasons.

I’ve been watching The Kingdom, a 1990s hospital show by Lars von Trier. I’m finding it entertaining. It’s kind of understated and over the top at the same time. I like how, during the closing credits of each episode, von Trier steps out and comments a little on the episode and the series. 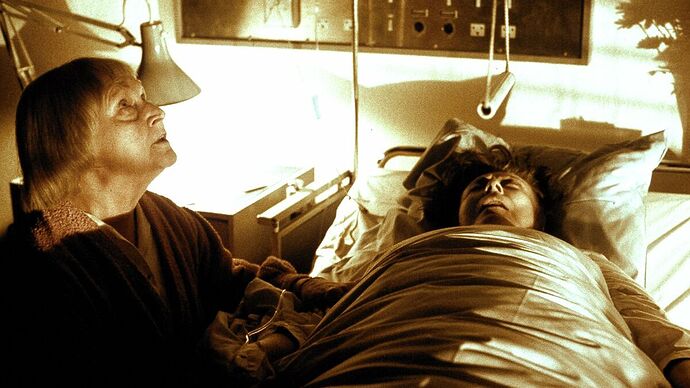 The first part of a Danish miniseries that has been edited into two massive films, "Riget" is set in the neurosurgical ward of Copenhagen's Rigshospitalet, the city and country's main hospital, nicknamed "Riget". The show follows a number of...

Previously the only things I’d seen by this director were Melancholia (which I thought was decent) and Antichrist (which I still don’t think I can offer a coherent opinion on, even years later, but it’s not one I can imagine ever recommending to anyone in any context).

i remember that show because it got a shitty US remake, and i am also certain it’s the primary inspiriation for darkplace

the shitty US remake i mean

the shitty US remake

Ah, Stephen King’s Kingdom Hospital. I remember watching the first couple of episodes when it came out. I was in high school and I was a huge King fan. This was right when he was finally finishing his high fantasy / sci-fi Dark Tower series, and he was in peak “expanded universe” mode. All of his books had little character cameos and lore tie-ins to his other books. Even this remake of a Lars von Trier show tied in to The Dark Tower in a few ways! I remember there was a moment in the first episode where, over the hospital intercom, a nurse paged a doctor with a name that suggested he just might be the villain from The Stand. The darktower dot net forums were ablaze that evening. The show was garbage.

That’s interesting. I was aware that Darkplace referenced some specific show, but I guess I’ve never been curious enough to look up what it was. 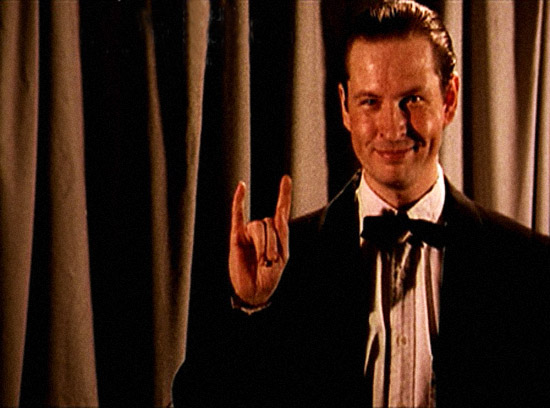 (This reminds me that I’ve never watched the movie Airplane! is based on. I probably should at some point.)

would watch a Fishing with GRRM miniseries

i tried rewatching sliders as an adult, and it’s just a very boring, stupid show. also there’s a “soviet america” episode in season 1 where communism is just nazis with a different logo

but i guess they couldn’t have used a swastika on us network tv or something?

there was a great pilot/tv movie from the early 2010s called parallels, but unfortunatley, nothing else ever came of it. so i guess the best altenate universes tv show is still magical shopping arcade abenobashi

the sliders guy left tng s1 over “creative differences” which i have to wonder as such a publicly avowed libertarian if it was just literally having to deal with gene roddenberry’s politics. early tng being such an [evolved beyond money and interpersonal conflict] thing sounds like a nightmare to the kind of 90s guy who complains about “political correctness”.

Sliders, the one with the awful logo and that guy from Jerry Maguire. That show always looked like it was the scifi equivalent of like, Hercules or VIP so I actively avoided it.

it might have had a brainless nazi as their lead actor, but without hercules, we would have never got xena

Barely related but here’s a v good pic of Xena I came across yesterday: 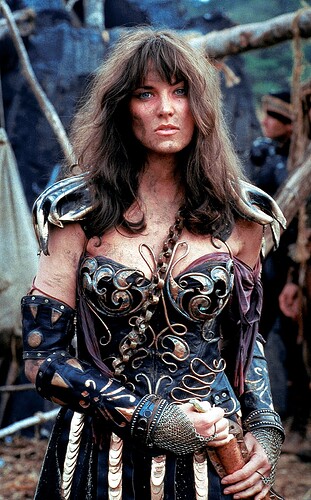 It played out like something out of a Rush Limbaugh rant

Truly nothing good about it

I know this is hard to believe, but it was a lot worse than Hercules

Truly nothing good about it

There’s an episode set in a sky mall where everyone lives and then spends their money in an endless cycle of consumerism, and also a gender swapped version of the main character.

WAIT is this the one where Remy becomes a sugar baby to a rich older woman???

Or is there another episode about men being oppressed