Or the Delfino flustered mutter

The biggest dumbest grin across my face at the new perfect mario. I imagine it in my head with long travel sequences between mini-overworlds to mask loading.

I mean the entire video is just

parental controls have to be demonstrated by bowser, because he is the only person in the mushroom kingdom who has ever fucked successfully

how racist is this game gonna be 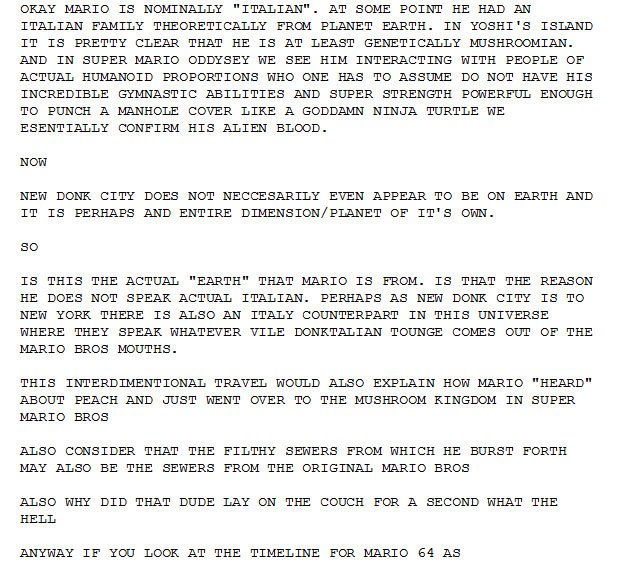 I like how NEW DONK CITY is based on modern times but everyone is dressed liked the 1940’s.

this is nintendo could you ever imagine it another way

this looks so weird and joyful and good holy shit

Mario parkours around ersatz NYC. Mario runs across a path of flowers through the sky in a redwood forest (!!). Mario THROWS HIS OWN HAT LIKE A BOOMERANG and USES IT LIKE A PLATFORM am i dreaming, has Nintendo been studying my Mario Dreams™

We have a thread for this shit come on

This game seems like the least stylistically consistent Nintendo has ever made. The different worlds have nothing to do with each other nor with traditional Mario elements. And slapping Mario’s cartoony figure into a world like that sucks it of any atmosphere it might’ve had and just leaves an aftertaste of meaningless “weird”.

It certainly confuses me!

The house style as of Wii U was rather pleasant (primary colors + white rim lighting + strong orange/pink/blue colored lighting) and it looks like they’re changing it up in a direction I don’t like as much.

What are these pink triangles Mario is collecting instead of coins

Replace Mario and this would be indistinguishable from any of those knock-off platformers starring Bubsy K. Ratchicoot

I’m hoping it’s easier on the eyes when you’re spending 5-minutes+ on each art style rather than cutting between them, but yeah. The reveal of New Donk city had me hoping I’d see a '90s New York film-set look (Ninja Turtles, Last Action Hero) but it’s so sunny and flat and vague when we’re not looking at the great taxicab model.