as in “Osman Empire” (& Ottoman Dynasty), given the curious crypto-theming of the game
have not yet played or watch-longplayed this game, just watched this TAS
even from that, it seems an insane mashup…

the hardware the game was released on might explain the poor sound quality.
The Data East Simple 156 is relatively obscure, and a bit strange.
http://git.redump.net/mame/tree/src/mame/drivers/simpl156.cpp
in particular, note that the only sound capabilities are two OKIM2695 chips.

that chip has no actual synthesis capability (FM/PSG/etc), rather, it exists to dish out streaming PCM data (basically WAV files). It’s usually used in conjunction with a Yamaha or similar FM chip to allow for voices or other high-quality samples, but not on the Simple 156. Because the chip has a single channel, other systems would use a pair of them to implement stereo, but this board took the odd step of instead using one for SFX and one for music.

If you want to hear a clear example of why this was rather a poor choice, check out the three Magical Drop games. The first was a Simple 156 game with short, tinny streams of music. The next two games came out for the Neo Geo, with its YM2610, and you can hear how much richer the sound is (especially in III). In fact, the YM2610 even has better streaming sound, as can be heard in Rage of the Dragons, Matrimelee, Blazing Star, etc.

But then again, the 6295 was apparently never intended to be used as the only sound chip on the board. An example of a PCM-only chip from that era which was would be the Yamaha YMZ280B, used on the regular Data East DECO 156, Data East MLC, some Cave 68000 configurations and a handful of other boards.

Data East was (increasingly) a mess in the mid-90s. It makes me wonder why Mitchell kept developing games for their hardware. Although I suppose they weren’t going to release an unofficial Strider sequel on Capcom hardware either way.

Does anyone know about the artist behind this game?

oh yeah, apparently someone (ゲー夢エリア51) created a couple fanzines (200+ pages each) for the guy who headed the game’s art design, whose name is T. Kogure, although he goes by Utata Kiyoshi (転清) almost everywhere, including almost all games he’s credited in.

He’s mentioned briefly a couple times in this interview with head designer Kouichi “Isuke” Yotsui: http://web.archive.org/web/20141222000306/http://www.gamengai.com/cmnt_inf.php?id=2313&type=translation&p=2
It also briefly talks about the move from Takeru to Mitchell, where Yotsui apparently brought Kiyoshi (and others?) with him.

The seven emphasized titles (and Cannon Dancer) seem to be the ones where Kiyoshi had a notable part in the art design, as they are the ones featured in the first fanzine. Curiously, he credits Shinsenden as his first work, but the interview apparently confirms Hototogisu is the first thing he worked on.

This tumblr has some very nice selections of art from various games, including Cannon Dancer and Karate Tournament: http://ultrace.tumblr.com/tagged/Mitchell

He also worked as a designer on the PS1 RPG Brave Sword, where he actually went by his real name. This may be the last game he worked on.

Here are all the fanbooks by the interviewer, available for $$$ on Amazon: http://urx.nu/2BJL

maybe mosesplan could bug zerochan to hook you up (with a book) or something.

maybe mosesplan could bug zerochan to hook you up (with a book) or something.

I’m not sure what this is referring to specifically (amazon jp will ship books outside of japan at reasonable cost), but I’m acquaintances with Zekuu, the guy behind Game Area 51, and he wants me to translate some of his books at some point. I don’t know if it’s going to happen due to how incredibly dense and huge all of them are, but we’ll see. Would love to see it happen. They’re all about kind of uniquely laser targeted at sb arcade heads.

The Cliffhanger: Edward Randy is a game that although it doesn’t play exactly like Strider, takes many cues from it w/r/t creating a game whose level design can best be described as creating a series of set pieces rather than a coherent whole (which is something Strider still arguably does).

It is also the best game.

Hagane
You are a robot ninja who runs on exploding rooftops.

The movelist is suprisingly deep. When you get used to it, you’ll realize you don’t actually need to fight your way through the first level.

occasionally I dwell on swording in platformers. it comes up in a variety of ways. Strider (in every incarnation?) is very clearly different from stiffer swords(wo)man games like Valis and Actraiser (and Rastan?), where movement (esp. jumping) is largely defensive (dodging), moderately navigational (platforming, although such games often have a degree of maze-like structure to some levels), and lightly offensive (generally about positioning in order to hit a certain point). It stands in even starker contrast to more “floaty” fare like Monster World and other titles which build more upon the trends of arcade platformers of the mid/late 80s, featuring movement as mostly navigational.

I don’t know how many subsets we can get into of slash-em-ups/run’n’swords/et~cet~er~a, but there definitely seems to exist at least a third kind that I think we see in Zoom’s Genocide series (Fourth in Zelda II, fifth whatever, sixth blah blah). Borrowing from run-and-gun design (and brawlers?), these titles convey a sense of pressure coming from hostile forces, while not necessarily using conventional “threats” like enemies constantly respawning from off-screen. The player gets a certain sense of push/pull in their progress through a stage, usually with multiple elements of the game (not necessarily consequential ones) encouraging aggressive forward action, and in these games movement becomes largely an offensive act.

In Strider, I see a particular evolution (concentration? origin?) of this third type, one keeping the pacing but placing a large (if not equal) emphasis on all three aspects of moving as player agency. Offense, defense and traversing of terrain are frequently and sometimes even simultaneously considered when the player chooses among their movement options, and this gives a sense of fluidity to the character’s actions that resonates beyond how they work with the level and enemy design. In other games, you generally acclimate to the protagonist’s range of ability in the world over the course of play, involving varying amounts of trial and error. But it seems like games discussed here give a (somewhat illusory) feeling of pre-existing skill/mastery which immediately sets them apart.

(the relatively huge range of the sword in the original arcade game, compared to contemporaries, certainly doesn’t hurt)

I, uh, shit. kind of forgot where I was going with this.
I guess I’m trying to help create an outline of what some of these games have in common so that I can more easily come up with other examples. But I don’t have any yet. damn.
oh well.

I’m not sure what this is referring to specifically

sorry
just frustrated by backwards way I research things + constantly stumblring across echoes of people ∞ly more tuned in than I will ever be. tracing web-threads of mentions through boundless networks brushed me past your gift of Undertale to zero, pinning length of yarn between two more illuminati… don’t think much of it.

Good lucky with Zekuu collab. Maybe some kind of patreon/kstarter thing can lead to digital, multilingual implementations of this work. to be Moonglow, not sure why stuff like that + GDRI + archive.org + etc hasn’t coalesced into larger multinational megaproject. I guess everyone subconsciously senses the high risk of personality conflicts.

whose name is T. Kogure, although he goes by Utata Kiyoshi (転清) almost everywhere

You are doing god’s work here.

Had a post but it’s all gone now. I’ll have to write something again later.

Good stuff Creep! It has been so long since I have played a Strider that I couldn’t recall what would actually “define” a Striderlike so your past provided a good wireframe. Honestly the thing I always remember about Strider is it having lots of slopes.

Edit: diplo please do a blog post about the islami-futirist cityscapes of osman

Edit: diplo please do a blog post about the islami-futirist cityscapes of osman

I was about to ask about moon diver. Haven’t gotten a chance to play it but I remember it looking kinda cool from a trailer. Can’t remember why but I remember strider coming up when I last saw it talked about like it had some devs from it or just really inspired by strider.

i have moon diver! i can’t remember much about it though.
i actually totally forgot it existed until you mentioned it just now.

has anyone played the european-developed strider ii for master system, mega drive and a bunch of computer formats?

i always thought of hagane as a shinobi-like rather than a strider-like. but that might just because it looks way more like a mega drive game than it does a snes game. i’m sure there’s another snes strider-like, too. psycho dream, maybe?

If ever a question 'bout Strider is raised - ask/look here - http://stridercitadel.b1.jcink.com/…

Would y’all consider Shatterhand to fit in the above list?

Shatterhand seems more like a Ninja Gaiden-like. Or Batmanlike. There should be a name for these NES action-adventure games, following in the wake of Castlevania. Power Blade. Kabuki Quantum Fighter. All that jazz.

This may be a stretch, but El Viento has always reminded me a bit of Strider. They’re both fast-paced, bombastic, setpiece-laden things.

Oh yeah, the Cocoron dude. I think I wrote something about that connection on the old IC wiki…

Ooh. Been a long time since I looked at Osman aka Cannon-Dancer, or The Karate Tournament. There don’t seem to be video or screenshots in this thread so uh yeah I’m doing it 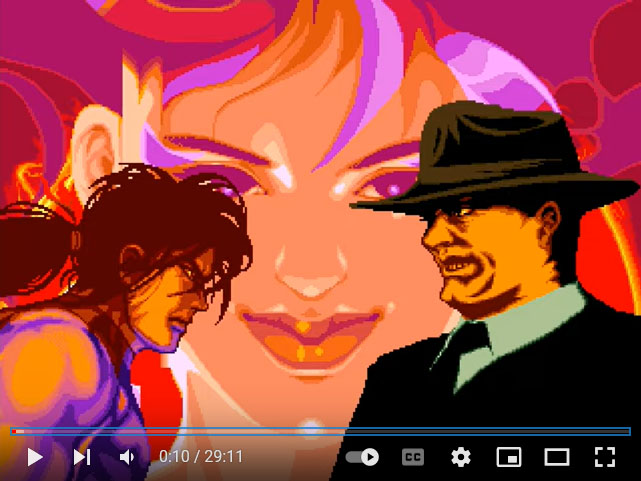 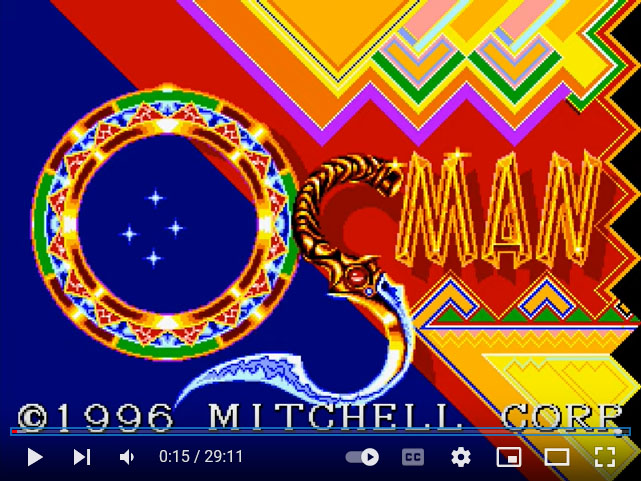 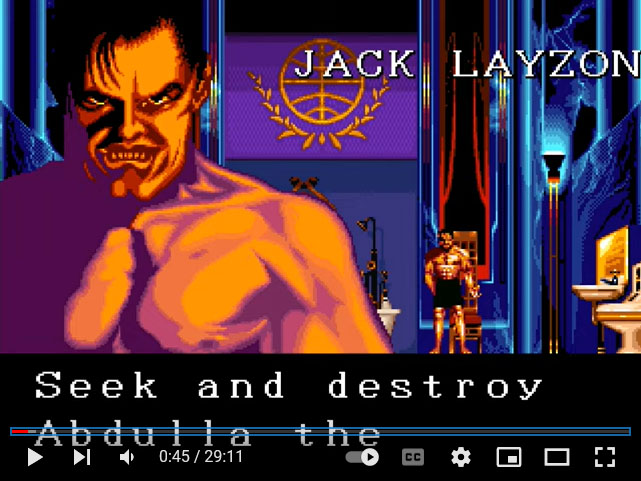 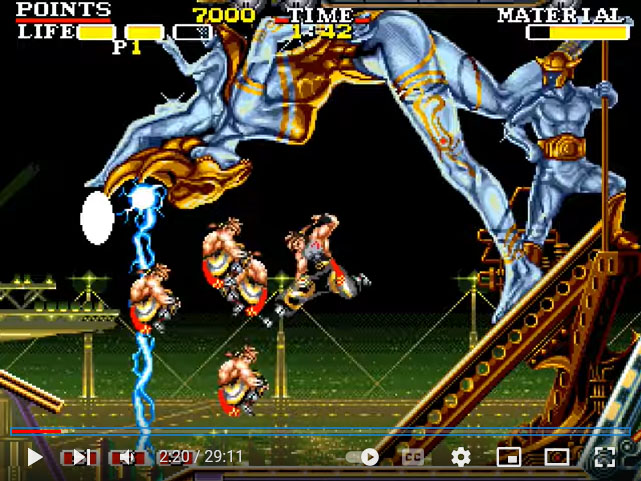 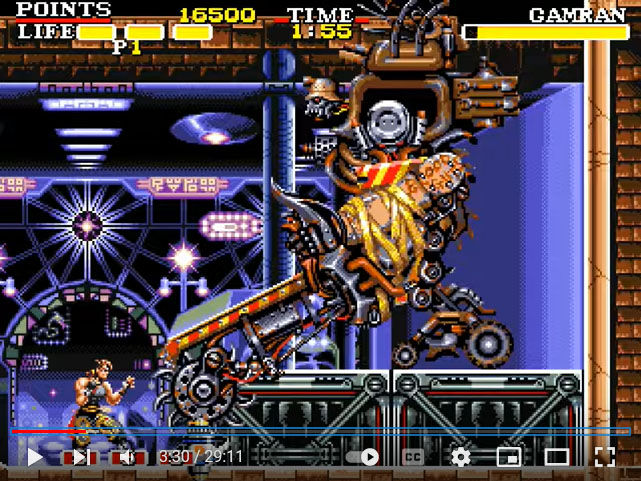 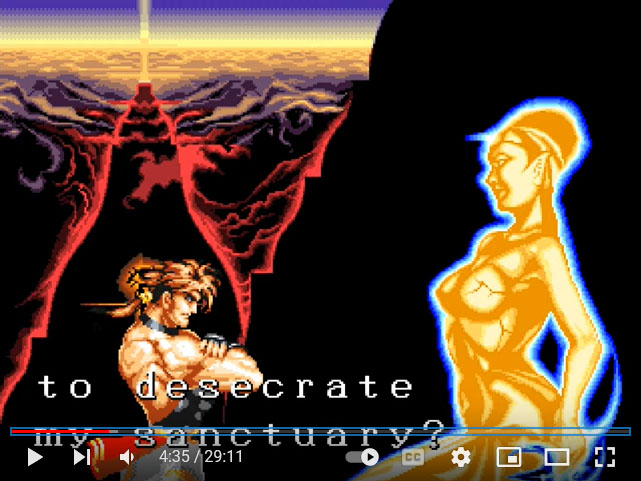 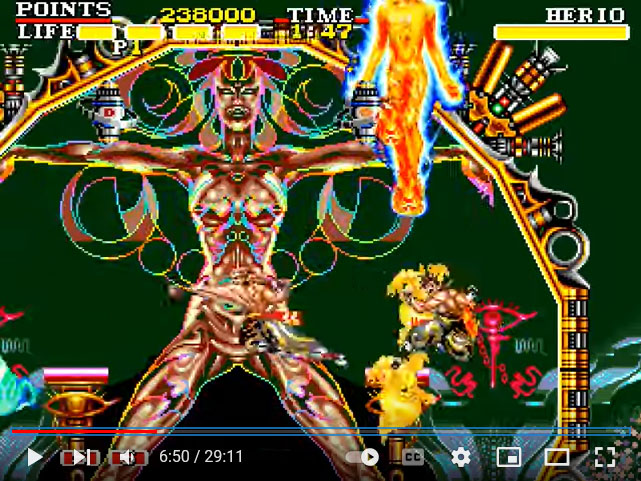 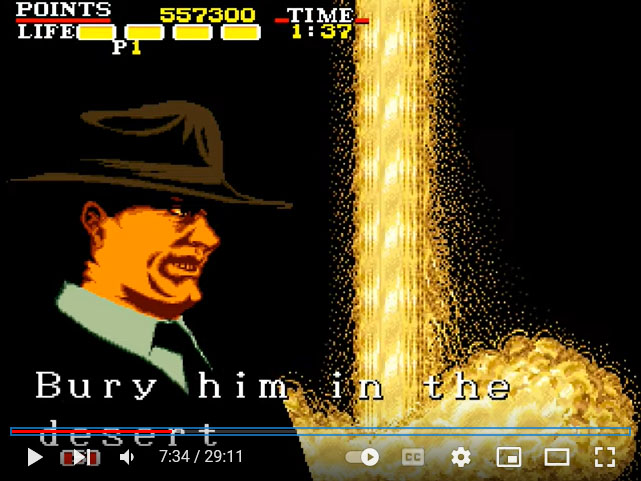 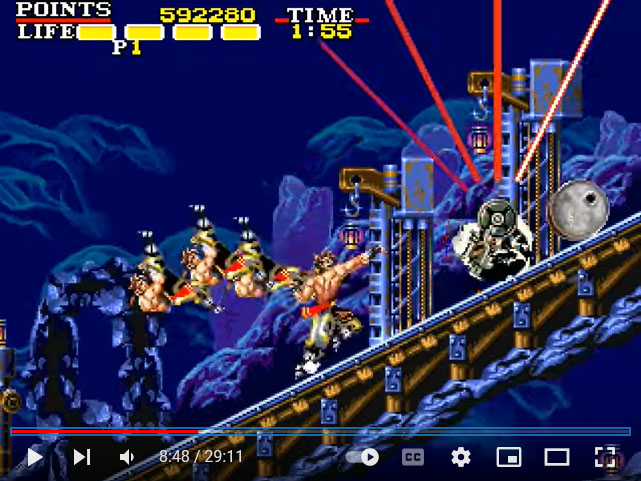 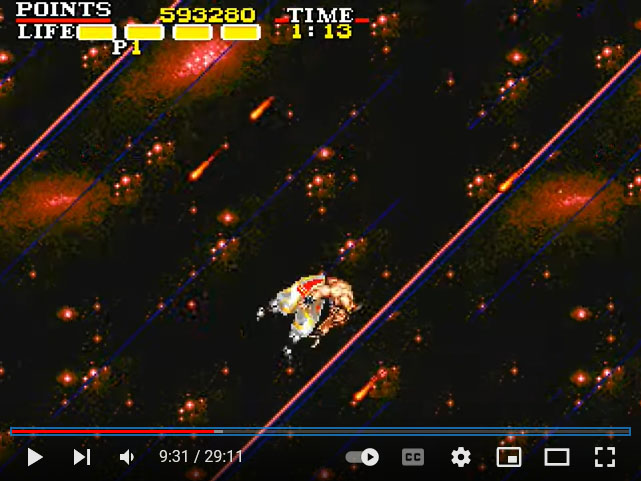 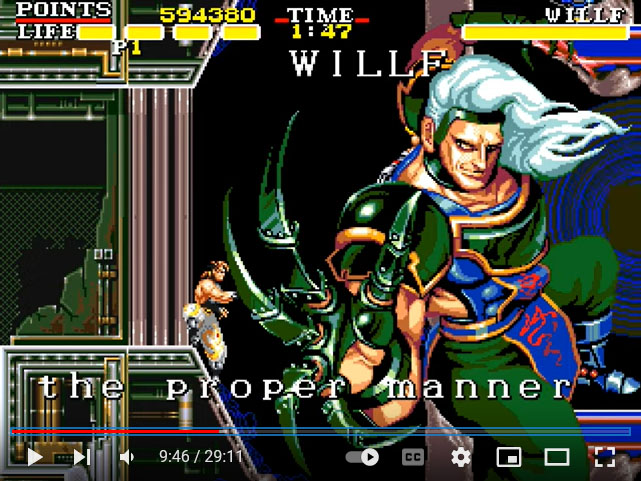 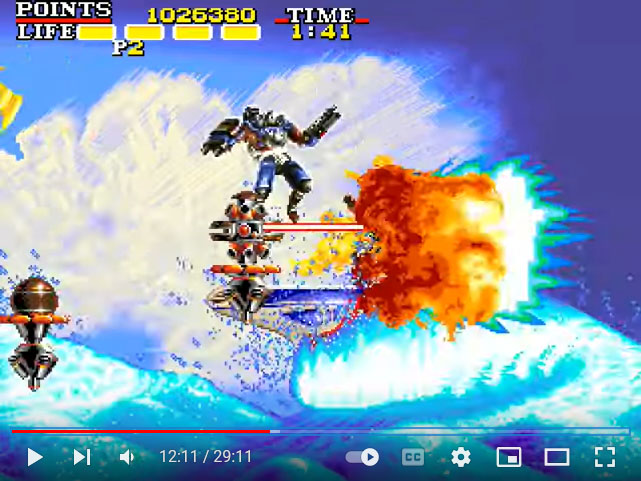 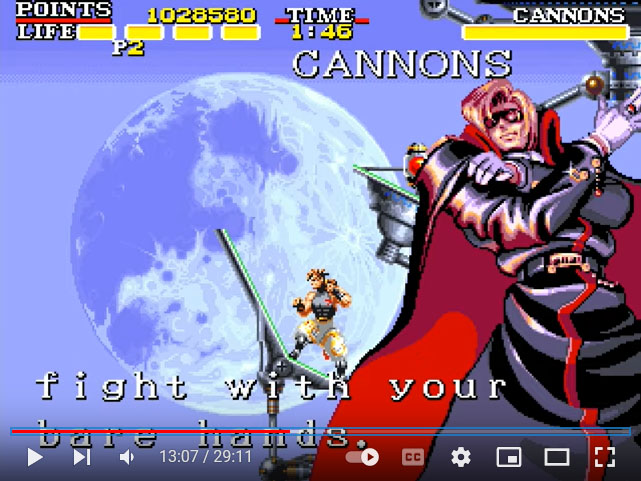 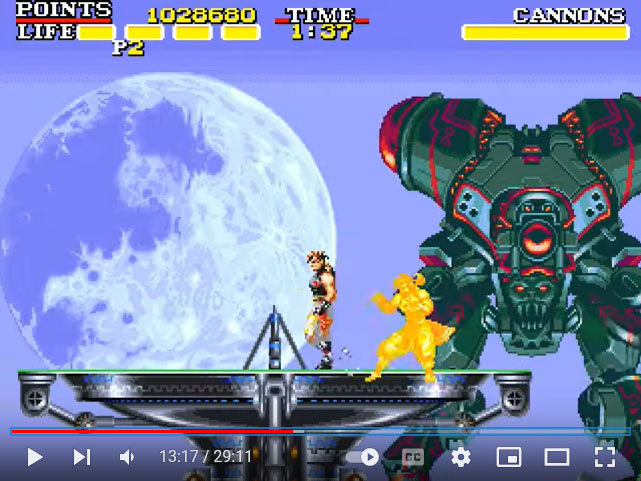 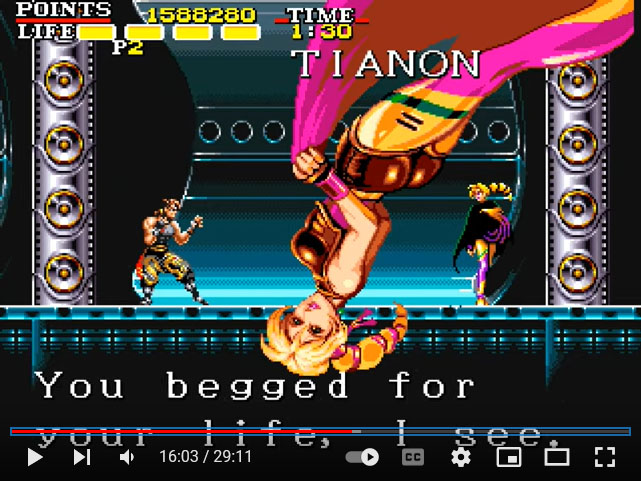 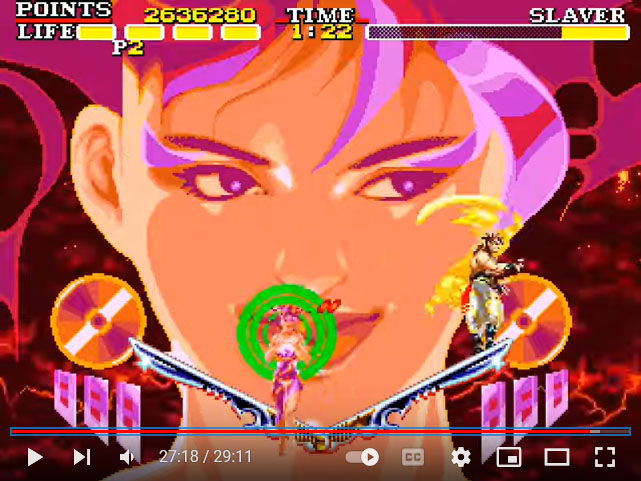 (Put the The Karate Tournament stuff in the fighting game thread, auto-link below vvv)

I was about to ask about moon diver. Haven’t gotten a chance to play it but I remember it looking kinda cool from a trailer. Can’t remember why but I remember strider coming up when I last saw it talked about like it had some devs from it or just really inspired by strider.