it's time for plausibly the best roleplaying videogame ever made

Does this obviate the need to play the original?

no, because the original is just so much fun, and also this looks to be a little less silly

I hope my Internet is fixed tomorrow so I can play this!

I never quite finished the first one.

Been hearing nothing but awesome things about this from my buddy. Never played the original, but I’m definitely picking this up.

I got this game

has the linux version been announced yet

I’ll probably never get around to playing the first one: should I play this one regardless?

I’m about two hours in and so far it nails the same casual open-endedness of the first; the game is fairly challenging but there are a million paths to success and totally optional questlines and NPCs you can kill and opportunities to respec, and the 6(?) main characters of this one are all a lot of fun.

so far just as good-humoured about its epic as the original.

there’s no reason not to play both, really; the narrative overlap is extremely minor and they’re just really really solid and playable CRPGs.

afaik they said they’re not doing a linux version because they had a bad time the first go-round and the one person at larian who knew how to do linux stuff has since left. I really wouldn’t hold out hope for linux releases of many games of this approximate budget moving forward; the audience didn’t really materialize over 2013-5 when the porting tools and middleware were all in place (plus everyone hated windows 8), and now you’re increasingly seeing even unity games not bother because no one maintains cross-platform versions of requisite plugins and devs don’t want the support burden.

anyway I have a full party of level 2 characters and beat migo who is an early optional sub-boss, that seems like a good first session with the game

so far they could’ve subtitled the game “Original Sin 2: Oops! All Mages!”

(I was messing around a bit earlier and ended up with a party of Not A Lot Of Mages which is pretty awkward?)

gawd I love how dense this game is. I’ve played about five hours (just hit level 4) and hardly gotten anywhere in terms of terrain covered or main plot advanced but I’ve done so much

like, I love how once you’ve got your collar off and it becomes a nuisance to avoid kraus you can just kill him away from the other magisters, or how after griff’s guys go to kill stingtail you can show up and save his life, just intuitively.

who else is playing this???

I’m doing pretty well, about 8 hours, everyone’s level 5, finally starting to feel like I have some good gear all around, and I just got my fourth waypoint

I’m going to be that guy and say I’ll grab this when it’s had a few updates and is half-off.

still a little on the easy side, should’ve picked tactician 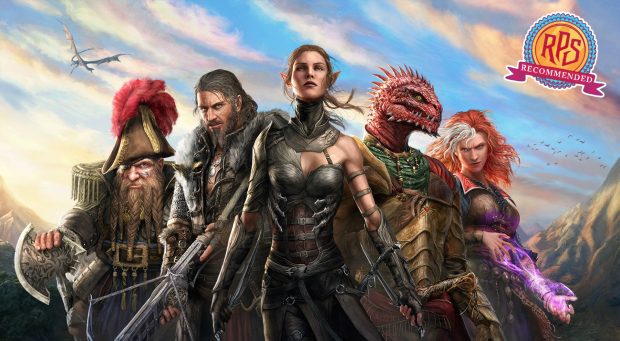 We were supposed to be heroes. As you play through Divinity: Original Sin 2 [official site], your character and companions will be many things to many people: thieves, killers, saviours, fugitives, outcasts, demons, nightmares, lovers, traitors,...

seriously it’s a miracle that larian are making games, these are the only CRPGs that deserve to be mentioned in the same breath as the original fallout for their flexibility and accessibility

the tone is perfect, the combat is actually great, the visuals and music are perfectly nice, they’re relentlessly interesting, etc. these games are just utter triumphs and they deserve to have a much, much bigger audience than they already do.