Holy shit this game makes my brain release so much dopamine. It feels so easy to play and I dont have to learn long combo strings and you can roman cancel anything and theres no lolicon bullshit. Truly an A+ game.

hi aphrodite, how are you?

well, maybe i have nothing to add because i ain’t played this game. i’m curious, though

before this one I’d probably say Rivals of Aether or Guilt Gear Accent Core or maybe Project M? Or Tekken 7… or… basically none of them stand out tooooo much. But this one absolutely blew me away.

doesn’t matter at all but it does sate my curiosity, thank you! (it is cool to have younger people on the forum)

i got bad hands but i used to play a lot of KOF13, i guess i like 2D shits. i’d probably enjoy strive

The music sounds like Ishiwatari took his first vacation in 25 years, planning to finally listen to all of the CDs he bought during that time, but he only got as far as his, like, 2006 pile cuz he got really, really into System of a Down.

Since they nailed the netcode my #1 request (after working lobbies so I can play with my friends) is a playlist feature so I can send certain songs to hell, and also I wish I could just buy Birthday Train instead of waiting to fish it up

Birthday Train is in this right

The public play tests and betas had me really concerned about this game but I’m enjoying it quite a bit now. I still think some of the changes they made in hopes of making the game more accessible were silly or confusing and I’m still not a fan of how most character movement feels but I’m playing Nagoriyuki so it movement doesn’t matter quite so much right now, he rocks

I stopped playing Guilty Gear XX back in 2003 because my left thumb literally got a blister from the PS2 d-pad from too much double-air-dashing with my main Millia, looking forward to finally getting back to the series

When did they stop including Bridget in the roster? And did it happen because Bridget was unpopular or because their yo-yo was inherently too OP? (My gut says the latter)

Bridget stopped being in the cast after XX although he has some XRD style art in the pachinko games IIRC.

I would play Strive but fighters are a young mans game and I really didn’t like the demos.

Bridget’s very popular in Japan so I dunno why they left him outta Xrd. I thought maybe they were worried about how the character’s concept would fly overseas but I don’t think that’ll be an issue nowadays.

These are the results of the character poll ArcSys did last year: 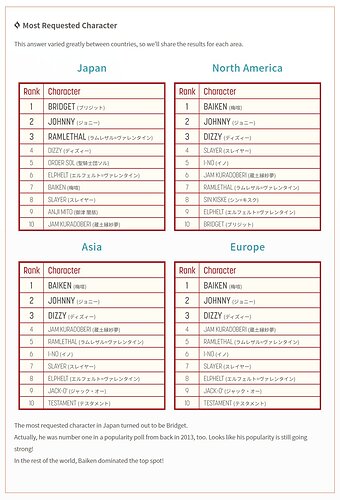 I assume most non-Japanese respondents got into the series with Xrd.

They’re probably saving him for season 2 or 3 DLC.

Looks like my xbox elite controller’s ability to switch out to a different style of dpad will finally come in handy for once. I usually strongly prefer a traditional cross d-pad, but apparently the “circular” style is well-liked for fighting games. Where did I put it though…

I’ve been playing on a hitbox I built; quarter circles have never felt easier

Wait the story “mode” is literally a 4 hour long cutscene, not a campaign?? I watched 15 minutes of it already and started to wonder and googled it

I think that’s how it was in Xrd Revelator / Rev2 as well?

I can sort of understand how they ended up there since fighting game stories otherwise wind up contorted into a series of pretexts for 1v1 matchups, but still, never did I imagine this could be a thing

you can map dash to a button now, so if you kill your thumbs again it ain’t gonna be from that

I spent 45 minutes in Strive on PC the other night and only played one match in that entire time. A real monkey’s paw situation with that netcode. It’s great, but everything else about the online experience sucks.

Don’t have a lot of thoughts on the game itself because of that, but I’m sure it’s cool.

Yeah. The actual netcode once your in match runs super smooth, but the lobby system is almost unusable, especially if you want to play with friends.

Yep! I enjoyed hanging out with Xrd that way.

This set is fun.

I am so glad the damage is still very big for a modern game. I am really irritated that matchmaking isn’t working for me.

If anyone wants to fight on PC hit me up. I will never invite someone else cuz I’m shy but feel free to challenge me. I’m sure I’m already friends with everyone but Steam Community :: LONLEY TIME if not.