Give Up the Ghost: a puzzle checklist

Finally released the ghost puzzle game I had been developing off-and-on for what feels like forever. 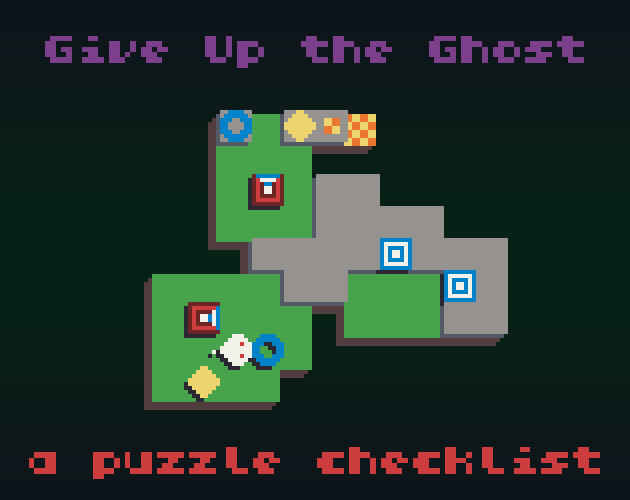 Give Up the Ghost: a puzzle checklist by gate

I think you’ll enjoy it if you like puzzle games, although I sort of doubt it will convert anyone into being a puzzle fan (despite it looking very cute imo!)

I started working on this game before Control the Body, but I’m releasing them in the opposite order so it was only able to partially benefit from the design lessons I learned there.

I have a few ideas for my next project spinning around in my head right now! Glad to get this game out the door in a state I’m proud of.

Oh my god! Check! I love that so much

this is top shelf video gaming

Congrats on finishing this up! You naturally do so the day I start up a different lengthy puzzle game (Filament, which I hope is swell) so I won’t be able to get to it for a bit, but it’s definitely added onto my “get to” list.

This is great!! I did the first 10 levels before work, level 10 was a hurdle because I’m good at teleportation logic and bad at sokoban, but getting it felt very good. Looking forward to getting through more of this.

All the mechanics are very cleverly introduced as well.

Takes me a hot second to wrap my ahead around some of these but it’s a good “aha” moment every time.

One of the many things I tuned while stuck on the puzzle designing side, lol. The wall bonking animation is very simple but I played around with the timing and how it interacted with the repeat rate so that it would actually repeat in a satisfying way. I also think I got better at making sound effects.

In general I’m learning that presentation/polish/feel is super important in games, even when the game is turn-based.

This is great!! I did the first 10 levels before work, level 10 was a hurdle because I’m good at teleportation logic and bad at sokoban, but getting it felt very good. Looking forward to getting through more of this.

Nice, yeah 4, 9, 10 are the usual hurdles early. Basically all the puzzles have tricks that took quite a while to develop via pure force of will and iteration.

Takes me a hot second to wrap my ahead around some of these but it’s a good “aha” moment every time.

Glad it’s working for you! I definitely think this game can be a slower burn because it asks a pretty wide range of things from the player.

Not bad so far! I appear to have somewhat more reach than I used to. It’s a very slow process of gaining followers on like Twitter + Itch, but I think having something that looks somewhat graphically appealing immediately helps, plus I used a banger of a song for the trailer.

Might try to do a Steam release just to get practice with that and understand what all I need for the Steam page – I hear the requirements can be specific/arduous.

Got up to level 20 and I think I’ll call it a night there. I feel like I basically understand what to do, but some aspect of the execution is eluding me.

After sleeping on it I was able to beat level 20 without too much trouble.

Wow good progress! Some tough puzzles in there.

havent gotten very far yet but im enjoying this!

Considering whether an in-game hint system makes sense for this game or not. I’m thinking of a system that the player can optionally engage with that reveals one hint at time to help with deductions?

Unsurprisingly a lot of the comments on my itch page are asking for hints (which I oblige). At the same time, my design goals are sort of like “solving the puzzle is its own reward” and “basically no content is locked” and I’m not sure if a hint system runs counter to that. I’m also worried that an in-game hint system will encourage players to grab a hint before they’re really stuck. Maybe it makes more sense as an external page that takes a little more effort on the player’s part to reach out and find.

I just remember that one time I spent 10 hours solving one of your mario maker puzzles because I simply wasn’t looking at a key piece of information, and then it fell in place after I stepped away and came back

basically this, I think this game has no hidden information and I have the capacity to figure it out EVENTUALLY, and that in itself is more rewarding. looking at hints in puzzle games almost always just makes me go “well shit I could have figured that out probably”. so it really may a decision of how much time you’re willing to allow players to work it out before giving them answers? maybe a credits system where they have to solve x puzzles to get y hints or something, idk

i’m only just chipping away at this about as often as I play baba which is like a puzzle a day but so far i’m incredibly impressed not only by the puzzles being engaging but having a good amount of depth and a good learning curve to them. my brain isn’t capable of binging them but that’s more reason to take it slow and not accept help

yeah, it’s definitely more of a slow burn. each of the puzzles is pretty involved. in general i think you have to make like 3 or 4 good deductions per level to solve them. it makes the levels feel very intricate and hard sometimes (especially when you’re stuck) but also basically ensures that the player is engaging with the mechanics and doesn’t just fall into a solution accidentally.

it’s also just more the style of puzzle i enjoy. i don’t like when things fall apart with one key move because a lot of puzzles in, say, parabox, i solved instantly when looking at it for the first time and there were no complications. i like to sit and ponder about a puzzle.

i would amend this to no undiscoverable information, lol. for one, the game does not ever tell you the rules of anything, so you have to experiment to find out (even though the levels strongly encourage you to experiment in a certain way). for two, there are some levels that start in a state where, uh, you have to make some deductions to reveal things that aren’t immediately apparent

You’re also new enough yet that the information doesn’t really exist outside of asking you, or asking you to put it in the game. You could seed your own guide of FAQ for it and preserve the distance from the game to the hint.

Considering whether an in-game hint system makes sense for this game or not. I’m thinking of a system that the player can optionally engage with that reveals one hint at time to help with deductions?

If you go down this route I thought the system eventually included with Yugo Puzzle was very reasonable. There were two clues available for each puzzle (a minor and major one) which were basically just a cropped screenshot of a specific point on the path to the final solution. Granted due to how dynamic the block shapes could end up in that game the cropping could be used to obscure very specific bits of info and I don’t have a feel if the same would be true here, but it is still a system worth at least considering, maybe who knows I have a poor feel for how hard implementing something like this would be in a tic-80 shell would be.