Ah, I felt like it was the first one with halfway-decent button buffers. Maybe I’m too used to forgiving-style input but I always swing for wide buffers as an ease-of-access thing. Of course, it goes along with forgiving cancel attacks and they didn’t go that far in Dark Souls 3.

Oops, I stayed up playing Griftlands, which I bought in the Steam sale. It’s another deckbuilding roguelike, but it feels distinct from the dominant Slay the Spire format. It has a strong focus on narrative, which doesn’t always feel compatible with roguelikes (aside from Hades), but in this case the story fades gracefully into the background once you’ve gotten used to it.

You’re running two different decks at the same time, and they’re used for two different types of battle with their own systems. Both are interesting and fun. There’s a nice boardgamey feel to them.

I need to go to bed, but maybe I’ll post about this game later. In short: I strongly recommend it. Solid writing, cool aesthetic, very fun card battling, nifty narrative choices that feed well into the gameplay.

played ‘we know the devil’ and tbh at first i really didn’t care, but then i did, and i had to go through it again a couple of times

did u get the secret ending

i did and it was good

Maybe I am playing it wrong but Odallus just made me feel miserable as everything takes two hits of your big sword and they love to hit you off a platform.

Folks on here kept comparing it to Castlevania and lord I wanna run back to the thoughtfulness of a Castlevania. Neat how much it wears Berserk on it’s sleeve though.

Then I played the first stage of Oniken for the first time in whatever years: okay.

Will find something to sink my teeth into soon.

sega rally revo has a really good PC port and it is a great game. tbh i like all the sega rallys, even the unloved PS2 one and the very pixelated GBA game

Been playing Nioh 2 since @Godamn_Milkman got it for me for Christmas. It pretty much rules, although it’s Extremely Triple A in a way that I have a hard time parsing.

First the baffling: there are a bunch of decisions that are deeply player hostile…for like, 45 minutes, then become non-factors. For instance, this game doesn’t do Estus exactly - it’s actually a consumable item that you can run out of. For someone coming from Dark Souls though this isn’t obvious at all, since you automatically refill to your max at a shrine…if you have them in stock. THEN once I realized it was consumable, I thought I could only get it from enemy drops which would be awful.

But then milkman did a tutoring session for me and showed me that you can get basically unlimited supplies of it using a special currency (one of…four different currencies?) that you only get by “selling” your equipment at shrines. And then you can basically just buy as much as you want because equipment comes flying out of these chodes like I’m playing Diablo or something.

So why limit it at all? It’s only going to be a factor until you figure out this one system, then it’s a non-decision. Baffling.

There are a number of other under-explained or totally unexplained systems in the game, including little jinjos you can collect for permanent blessings, the word “anima” (it’s just mana, I swear to god I had to look this up), whatever “glory” is, etc. etc.

But y’know what? I think this game rules. It’s a super-maximalist take on the Dark Souls formula and, while I love how austere the first Dark Souls is (or at least the 2/3 I played), it’s kinda nice to get stuck into a bunch of systems and loot and counters and stances and combos and currencies and and and and…

Plus the thing I learned from Dark Souls, which is to play the first half of the first level over and over until I understand what the fuck is going on, has worked really well here. I just needed someone to also give me a 30 minute lesson on all these absurd systems piled on top of everything.

And it’s really charming so far. I’m glad it’s a bit talkier than its inspiration, because “War profiteering guy with a cool monkey stand” is a great character so far. And I just met the dude! Hoping they can keep the charm.

Anyway I really like it, and we’ll be co-oping it soon too which is nice.

once you get a little further so much of this becomes a non-issue. It’s weird, it’s like bloodborne. There’s a limit, but you probably will never worry about it once you’re deep in the game.

Bloodborne needed the bloodvial & bullet system in order to have some filler items to put in motes of light. With how it simplified the weapon & spell systems, it couldn’t give you items from other classes in those spots like DkS does. From that point of view it makes perfect sense, even if I didn’t enjoy the result (and I think they learned from the poor reception and introduced the Sekiro candy system for the same purpose).

The problem I’m speaking of is that you get… what 8ish blood vials and bullets per bonfire check-in? That’s fine, but the fact that you can run out if there aren’t enough in inventory is a dumb and stupid problem, but one that you mostly move past once you’re further in the game. That’s most of what the arrow, position, extra currency problem is here in Nioh.

UNSIGHTED: This is neat. In practice, it’s a by the numbers, Hyper Light Drifter looking, hyper polished Zelda-like, on the short and easy side, with a focus on parries (with very generous parry windows)
The twist is that you and all your nice little friends / shopkeepers are dying, each with their individual countdown (like: 156 hours left) and you need to hurry to the end ASAP.
The time limits are NOT generous and turn what could have been a mundane chill game into a stressful nightmare.
This colors the game’s experience in interesting ways. I am running and jumping like a speedrunner all the time. Getting stuck for one mere minute on one puzzle is agonizing. Deviations from the main path to get bonus items feel like a waste of time. Even if the parry windows are generous I often get too impatient and take needless hits because the clock is ticking. I have stuck with one weapon (the axe) and am never going to spend time to experiment with another.
There’s an evil menu that shows everybody’s timer, I’m checking it all the time and now that 5 people have only double digits hours left it’s painfully obvious that even with all the efforts I’ll fail.
This popup is the worst: 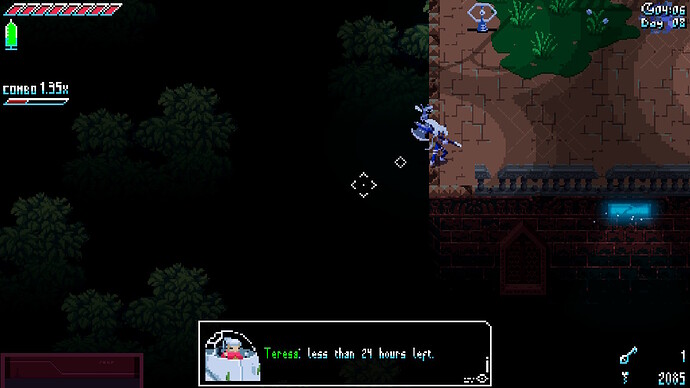 You can also find items that add 24 hours to one’s person life and misusing them is almost guaranteed.

It’s a very good game. Very stressful but engaging. You can turn the timers off but I don’t think the game would be worth it that way.

Streets of Rogue: Tried this with @VastleCania ’s req. It honestly made a horrible first impression with confusing mechanics, a bad choice for a default class, and South Park adjacent humour and graphics in the tutorial and HQ. I warmed up to it because writing pretty much stops existing by that point (until the end) and I focused on one simple character: the cop. Love playing as a fucking cop and arresting people. I won by going up to the final boss and just handcuffing him. Cops are the best. I’m sorry

I played enough as a cop to notice that drug dealers are always « guilty » (= should be arrested if you’re a cop) while slavers aren’t. That’s commentary

Ender Lilies: Feels like this is the most 2021 game as it is another insanely high quality metroidvania that didn’t make waves and wears a Souls influence on its sleeves. Extremely competent and inessential. The main gimmick is that you don’t play as a badass but instead as a little girl who summons badasses for her. In practice, this changes nothing to the formula mechanically but it’s a nice touch.
The game world is such a Souls game world, everybody is affected by The Blight and you’re going to fight Knight Captain Julius and Ulv the Mad Knight. Not a joke BTW these are real names from the game

i will often ruin a run just to kill one of these fuckers, consequences be damned. 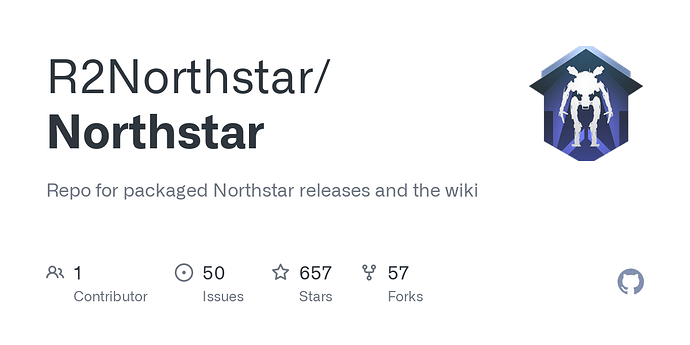 GitHub - R2Northstar/Northstar: Repo for packaged Northstar releases and the...

Repo for packaged Northstar releases and the wiki. Contribute to R2Northstar/Northstar development by creating an account on GitHub.

Another evening of Backlogging

Lucent Bounds seemed like it was going to be super cool from the trailer - a minimalistic but challenging 3D platformer that… I think requires greater precision than I’m capable of. Possibly more than most people would be capable of? And right off the bat! Like holy fuck, give me a half hour to warm up to the harder maneuvers, dog! I really hate doing this but I refunded the game, it’s rare that I feel done wrong by a challenging game but fuck that.

Gods Will Be Watching starts off with a bunch of characters having a boring, heavy-handed debate around a campfire, and then the first playable scenario has you trying to manage a hostage situation (as one of the hostage-takers). And turn by turn you choose options to try to keep a few variables balanced:

Anyway my first go at it ended with the guards throwing a hand grenade into my room because I only had one hostage left. It was actually way more boring than I may have made it sound above. I’d rather play Jenga.

Tengami is gorgeous but honestly, deadly boring. A big part of it is that the player avatar is slooooow. And the worlds are large. Something needed to be adjusted here. The puzzles are kinda whatever, as well.

Star Vikings Forever is a turn-based, combat/puzzle thing. It’s all about shuffling bad guys around, anticipating reactions, setting off chains, etc. It’s actually pretty good! I kinda wish it were a little less bloated and that they excised the “story” altogether. It has more or less one joke and it was old the first time it was told.

SHOT2048 was a pretty decent time-waster for all of about 20 minutes, but that’s about it. The physics seem somewhere between too wonky and not wonky enough, if that makes sense.

I also preemptively crossed a handful of games off the backlog without playing them by reading reviews/watching gameplay/just looking in the mirror and saying “C’mon Mikey, you know you’re gonna bounce off of this in 10 minutes, go watch a funny cat video instead”

I thought that hostage scenario in Gods Will Be Watching was pretty cool, but the victory conditions are so narrow and specific that I found it impossible to progress. Really wild choice for the first level! I guess there’s some novelty to applying a Battletoads difficulty curve to a 2010’s prestige indie, but it didn’t work for me.

SHOT2048, however, really works for me. It turns out applying physics, even janky physics, was what I needed to finally enjoy a 2048 style game. Best Yuji Naka game in a decade.

Doing La Mulana 2 right now. It’s a lot brisker than the first and seems maybe shorter, easier but still harder than most other platformy games? Not feeling like a tiny god the way I do by a little over halfway through a metroid, that’s for sure.