@username has spoken! Our next game is BREAKER by Daniel Linssen! It’s free! You can even play it on an android phone! Personally, I can’t wait to start unlocking palettes. It’s one of my favorite incentives.

Anyways BREAKER! As noted elsewhere I’ve been doing my personal deep dive on that massive racial justice bundle from last year, and in the course of doing so I have stumbled upon a few high score focused games that made me go “dang, I wish I had someone to play these games against”. Now there is this ongoing contest which gives me just that chance so I picked my favorite one of these type of games I’ve come across in it so far. 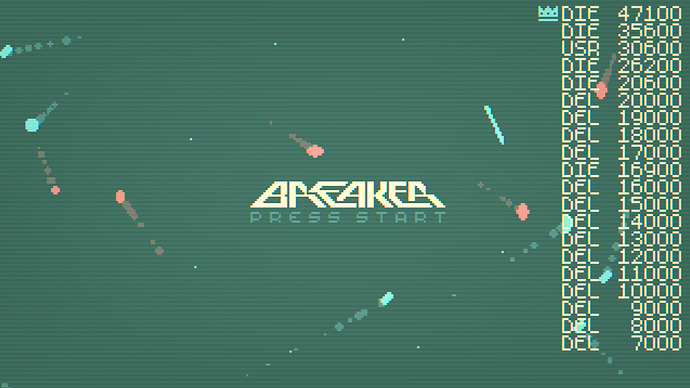 But what is BREAKER anyways? 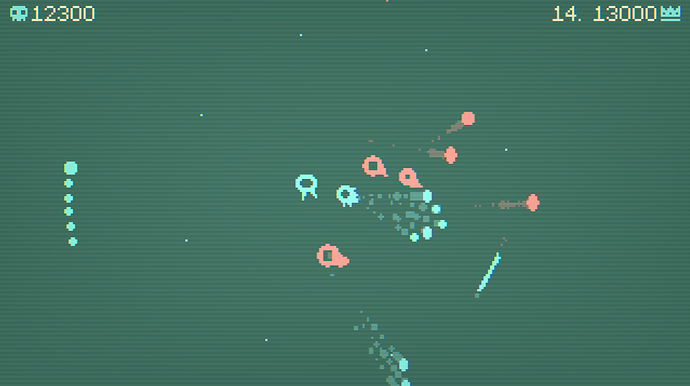 The game page describes it as “a blend of BREAKOUT, SPACE INVADERS and IKARUGA” and that is pretty close, although I’d say it is less like Space Invaders and more like Gyruss due to the fact that all the enemies are in the center of the screen and you rotate around them. You play as a paddle who can’t directly attack the enemies it circles but instead deflects their bullets back at them. The question then is how can the enemies hurt you if you can just bounce their attacks back at them and that us where the Ikaruga bit comes into play: you can only reflect bullets the same color as you back, different color bullets harm you.

What makes it sing though is how the game handles changing the paddle’s color. Simply put with the default color scheme you switch to red when circling clockwise and blue when circling counter-clockwise (if you stay still you keep the color you had prior). This not only simplifies the control scheme down to two buttons but does an interesting job mixing attacking and defending together. If you see a red bullet coming nearby and you are red you’ll instinctively want to go bat it back, but you best be careful that in moving over a bit to hit it you don’t move counter-clockwise and change colors to do so or else you’ll just lose a life and curse yourself. It is initially confounding but after a few games you start to get into a good flow with it. 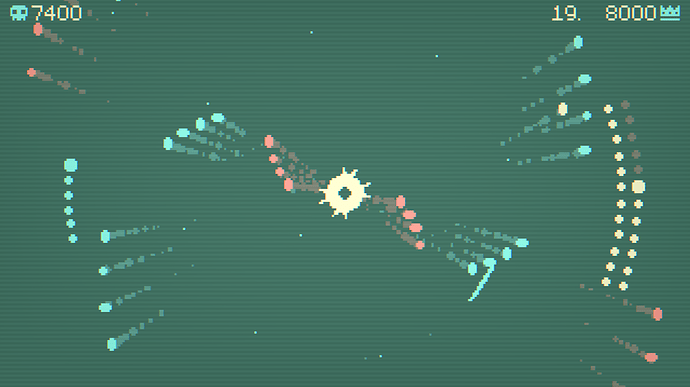 You can’t get into too easy of a flow though as roughly every minute or so a boss enemy appears in the center of the screen that sends more bullets your way, eventually in patterns that aren’t quite bullet hell curtains (I mean maybe later on it does, one of us has to get that far first) but are a step up from what the normal enemies were tossing your way. They also take a good number of hits, but when they are destroyed you get a nice bunch of points plus one or two lives back. It continues in cycles like this, as you get through more of them the regular enemies start tossing more bullets your way, eventually you die, enter your initials and try again.

I will note that I think there is a degree of randomness in terms of which bosses appear when which might make chasing a high score slightly luck-based, but oh well the game is neat go give it a shot I think it is swell! I won’t count any of the high scores I got when I first played the game, so here’s the respectable score I got when taking screenshots for this 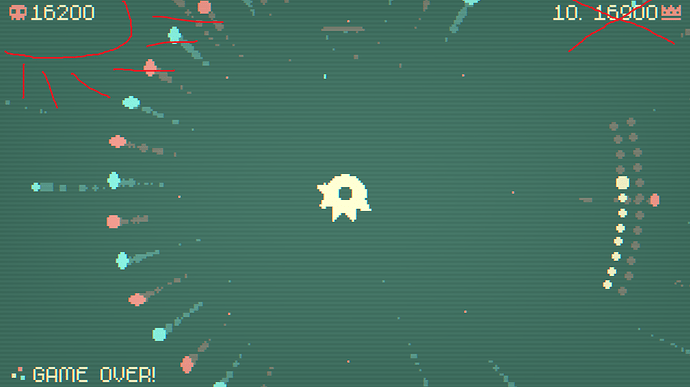 Your current score is in the top left corner, the next high score on the table you are chasing is listed in the top right.

Also FYI I believe to switch palettes you have to hit escape to bring up a menu that let’s you do so.

EDIT: FWIW at least for a while it isn’t super hard like some shooter-esque games get. Once you internalize the controls it starts fairly easy and ends up being what I’d call moderately challenging with boss fights being the trickier bits. I recall it eventually getting a bit hard but that’s generally when you are near or past the top default high score. That said there was one boss I came across a few times that felt legit tricky so if that one pops up on your run don’t lose hope.

Already love it. First score is 6200 but I’ll get a screenshot when I beat it later today 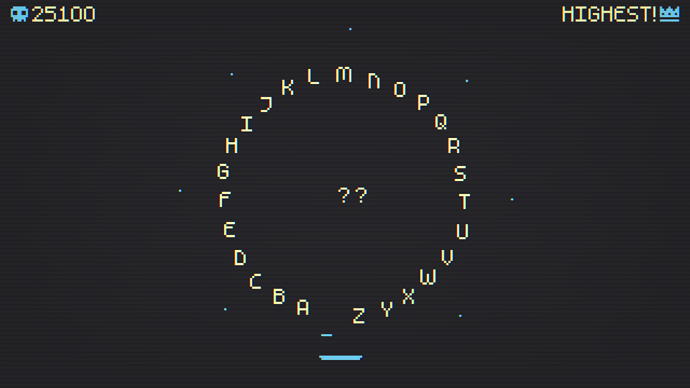 First try on PC got me this score. Big issue with the android version is the deadspace on the left and right sides - i generally want my thumbs to be as close to the edges as possible, and touching those does nothing on my phone. Much, Much, Much easier with analog triggers on a PC.

The soundtrack is great in this btw, and the fact that it has different versions for the different phases (pause, enemies, boss) is cool.

Fun trick: you can reflect your own shots no matter what color you are, and they actually duplicate. So if I miss, I can catch the same shot and two will reflect, albeit faster. Bouncing these back and forth is a great way to take some of the leftover shots from the boss and clear out an early part of the enemy wave.

You are making very good progress here! When I first played I tried to play with a controller and I had such trouble coming to a stop as the right color I switched to the keyboard and found it so much easier, although trying to use the triggers on said controller probably woulda worked as well.

I had no idea you could reflect your own bullets, that could be useful!

i can go way higher i think, i’m gonna spend more time with this for sure 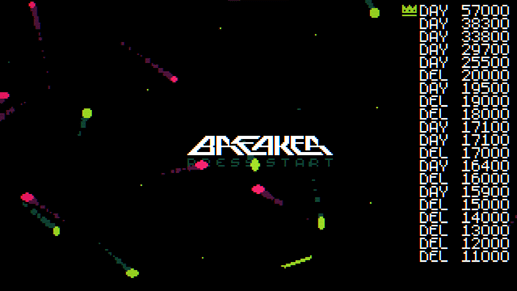 I beat my old high score too today, but you’ve got me covered by a bit. 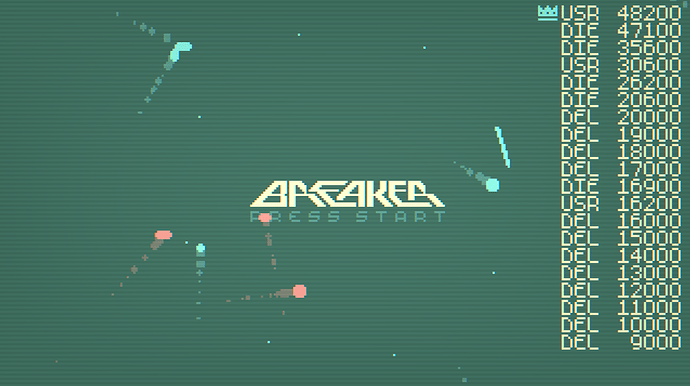 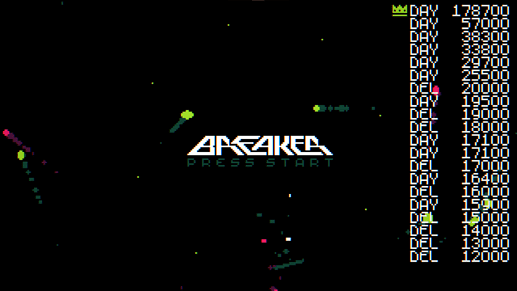 24,400 on first attempt. Pretty cool game! I feel like Xbone pad triggers are a tad too mushy for this game. I didn’t even bother seeing if the bumpers work instead, do they?

…You know I was holding off posting my current high score and was gonna say “the game takes a notable step up in difficulty in the 50ks, I think somewhere in the 60ks might be the highest reasonable score we could reach”. Clearly I am a fool and am curious if the game starts throwing utterly absurd stuff when you get into the 100ks or if the difficulty levels off at some point and it just becomes more of an endurance test. 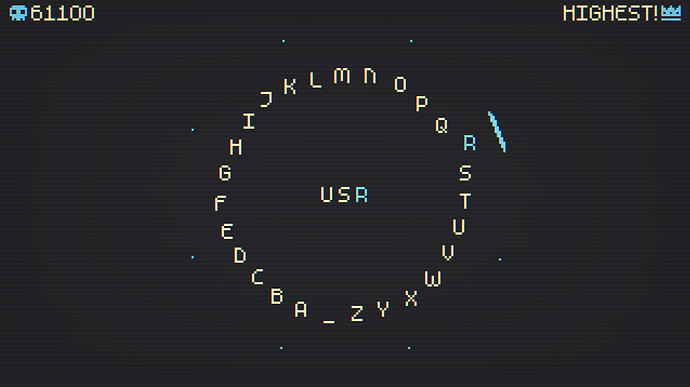 The game design takes a slight shift around the 50k score, I wouldn’t say it is dramatic but it does affect the way you have to approach things.

I messed around briefly and yeah I’ll stick with the keyboard over the controller triggers, sadly don’t recall if the bumpers work or not.

Glad people think it is neat! 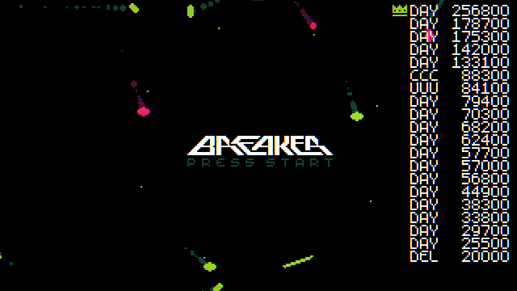 …You know I was holding off posting my current high score and was gonna say “the game takes a notable step up in difficulty in the 50ks, I think somewhere in the 60ks might be the highest reasonable score we could reach”. Clearly I am a fool and am curious if the game starts throwing utterly absurd stuff when you get into the 100ks or if the difficulty levels off at some point and it just becomes more of an endurance test.

it seems like the game begins to plateau in difficulty around 80000-100000? i don’t know if i’ve felt a significant increase in difficulty past that point. the screen gradually becomes harder to read and you start having to go through some of the scarier patterns rather than just avoiding them, but so far there haven’t been any big walls or anything, the game feels very forgiving. it does take a really long time though, building score feels really slow, the only thing i’ve noticed that helps with that is not getting hit since clearing a boss with full health gives you extra score instead of the health points

This game is great! I’m using the bumpers on an Xbone and it’s working okay for me. I really wish there were a restart button because I’m always making dumb mistakes in the first thirty seconds.

I have been following this developer for years. I think I may have even played this game before. But that doesn’t mean I’m good at it.

Edit: I thought I’d be able to do a lot better on my next attempt. But no, I did only slightly better. Thanks mostly to “Crescent.”

This is a very good game, though. 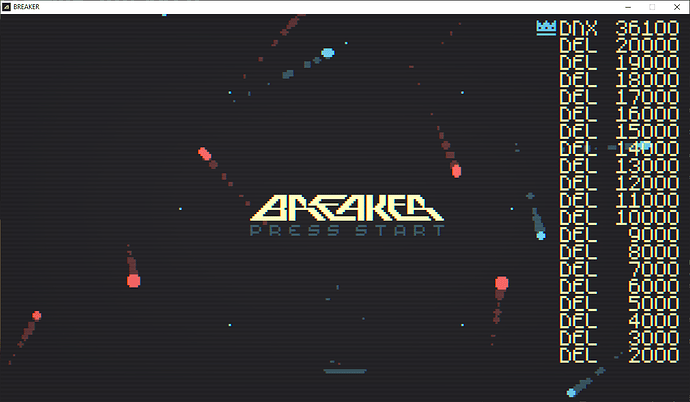 I blink a lot less often when I play this game. My eyes burn.

This was happening to me with other shmups. Ultimately why I stopped playing Mushihimesama. Wasn’t worth pain all day even though I was having a blast playing it

I’m not sure if it’s my new strategy* or coming back from my Breaker break, but I’m inching ever closer to six digits.

*My strategy is to try and never leave the bottom half of the screen. It helps me remember which direction to press and I focus more on aiming bullets. However, once you get into the second phase of the game, it becomes more important to clean up enemies as fast as you can, so I may have to switch things up at that junction.