Circuit City on the Edge of Forever

airport finally died, got a wrt3200acm for £40 and installed openwrt

and specifically, “perpetually unaware of hardware acceleration support” is one of my biggest annoyances with the modern linux community, it comes up in other contexts too (video encoding/decoding) and they seem weirdly unwilling to acknowledge it as a potentially huge downside to “”“running”"" linux on [only the main CPU which may not even be designed to do most of the heavy lifting for] a device, because, hey, they got linux on it, job done

Acknowledging it would change the terms of the debate around Linux’s policy towards proprietary drivers. It’s easier to take a hard line against them if in your “to be sure” paragraph you describe the situation as vaguely acceptable, or possible to make acceptable with minor tweaks

Only thing I don’t think they’ll do is bring over the iPad Pro aspect ratio.

I’m pretty happy with my 2020 16" Intel MBP I upgraded to early this year in the end. I’m glad I didn’t wait for the Apple ARMs to support more RAM before upgrading. It’s good enough to tide me over until the third gen ARM probably

I’m thinking lately maybe I’ll never get a 13"/14" form factor ever again. For me when I’m actually putting a device on a table or my lap I want the 16" to actually have the real estate for productivity tasks. And when I’m doing casual web browsing or ebook reading or video viewing, the 10" tablet format that I can hold up without getting tired is right for me.

Some of this is pandemic life though as I think the middle ground of 13" was designed above all for travel. But even there part of what’s changing is that 16" laptops are getting less oppressively heavy for a backpack

idk, if you ever tried to use proprietary drivers in linux, you know what a mess that is or will inevitably be, and after a few years, you have learned your lesson and gladly ditch the miniscule advantage that may be in store by proprietary drivers, but remains unused with the OSS flavor. I’d rather have an OS that is stable instead of spending half an hour bugfixing and troubleshooting each time a fukken driver update is pushed out.

Also also, writing hardeware drivers isnt’t exactly hobbists’ first choice of things they do, nor docu readily available, so if you aren’t buying a pet project hardware or am Linus T., you won’t get support for it, and it’s been like this for ages, so i guess we will be stuck in that limbo forever and deal w/ it.gif?

Am on One Bar of wifi on the Hinge Problem Bed over here. Any advice? The router/modem is about as far as can be from here.

I have no clue about your environment but guessing the internal walls aren’t full of water and are less than 10m from the router and you have a lot of neighbouring APs, try to use 5GHz over 2.4GHz (unless the neighbours are already doing that, then switch to 2.4)

Around January 2001, long before I had a car and right after my family got their first real computer (ie not a garbage picked Mac IIci), I walked alone a couple miles in about 3 feet of snow one night out to Circuit City to pick out a PC game because the only pack in Gateway tossed us was like Tomb Raider and the Wheel of Time FPS. The walk was probably about 2 and a half hours round trip and exhausting because no one had shoveled yet. I ended up getting that giant Quake 2 set with both expansions plus the extra disc of fan mods and maps. It was a very exciting trek. 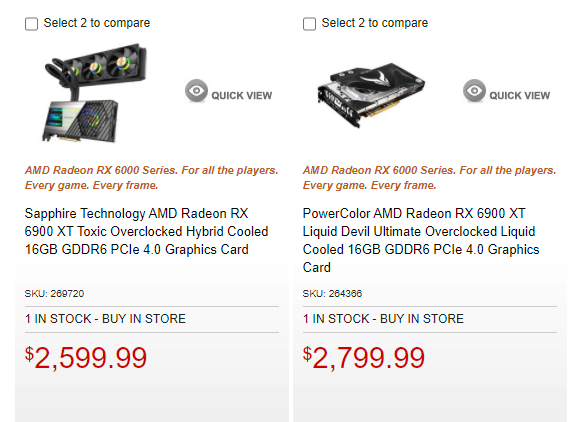 god has punished me for my hubris and poor humor

time to twiddle my thumbs until prices are sane

what a journey, gotdamn

yeah, i wouldn’t have spent more than this

for our current use case, which is like 2 phones, a couple of computers, a pihole and a firetv stick on 100mb down in a shoebox this seems fine

things like this make me really want to compile a “legends of posting” archive. just an impeccable piece of writing from start to finish.

it’s currently getting along well with the new monitor, which has Freesync

Every day, random people posting individual grafs on the internet that ought to make Jonathan Franzen ashamed of himself

for taking screenshots with my controller while playing games on my tv fraps was simple and just worked before games got too new to work with it. The GeForce Experience is too stupid to know the tv is what I want to take a picture of and I can’t even get it to work with a controller button anyway, obs is needlessly complicated for this and doesn’t even seem to work in the background, only if the program is currently selected? might as well just hit printscreen and open up mspaint one at a time at that point