analyzing freud, or "he knows his onions" (hilda doolittle thread)

I’m giddy with excitement about Analyzing Freud , an epistolary account of H.D.'s time as his patient in the 30s that’s nearly 600 pages of letters and footnotes.

I’d read her poems in ~2015 but neglected to read the wikipedia article and find this brain-breaking compilation of letters.

First, let’s get the cast of characters and shorthand, shall we? 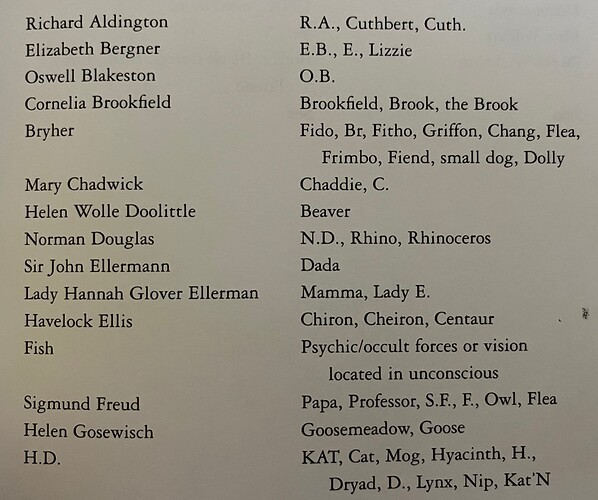 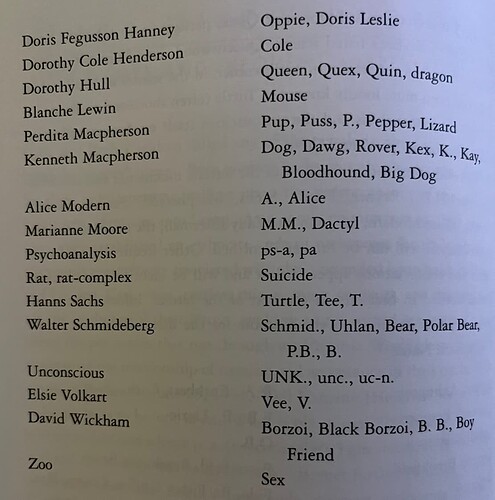 I’m not sure whether they call the Zoo “Sex,” call someone named Zoo “Sex,” or the columns are reversed and they refer to sex as “Zoo.”

Madame J. is the mother of le Courbousier (spelling) – you know, the ultra-modern architect, the one in fact who really spread the interest in this sort of sun-house.

This is from 1933 – I had no idea indicating uncertainty re: spelling in a parenthetical predated, say, AOL.

Having made up my mind so stubbornly as to go on existing, I think of the 20-25 years or so that lie ahead. I think that is my real attitude toward ps-a. I am afraid there is that sorting and tabulating complex in me. Also, being what I am, I have run across such odd types from time to time. One wants to help as intelligently as one can. But I need not tell you that. You must know too, Cheiron, that “men and cities” don’t define themselves easily. Up to a point, I have resisted the lure of astrology and occultism. But I want to know the “colour” of the people I deal with, their particular “ray” in the spectrum. I think I wobble dangerously on that very-fine line between science and occultism, and there Freud will help me.

I was resisting the lure of astrology and occultism too right up until this horoscope.

Fido dear and dearest Kex, never was there such a wrecked cat as when it realized at the last what it had with it and what might happen. It ran around and round in its little box in circles, got undressed, arranged the “you know what” in spectacle cases, then got it out, hid it in linings, then went mad, got undressed and thought again. It was a cold cat, it got undressed and tied “it” up in a blue hanky, then tied the hanky to its under-wolly. Then it went to bed. Then it went mad again, and imagined all sorts of dire acts. Then it thought sheep as a lamb, and got pin and a soprano, right “inside, H.D.” Then it lay stiff and cold and like a corpse in its coffin, and prayed to Fish, went on and on praying to FISH. Then about one, the mothersill began to work, and Kat was so tired, it just dropped off to a doze.

Nothing new under the sun now is there, certainly not referring to yourself in the third person as a cat with it/its pronouns

I have not found any discussion of these papers in the context of uncanny similarity to modern posting so I am redoubling my efforts re: adhesive flags

If anyone knows what under-wolly is or what H.D. tied up in a hanky please send me an invoice

If anyone knows what under-wolly is or what H.D. tied up in a hanky please send me an invoice

pin and a soprano

the contents of the hanky. a pill, some medication

the mothersill began to work

Mothersill (anti-nausea medication) worked pretty quickly, also probably not prescribed for nerves, so I think this is a substitution for the taboo medication. barbiturates are also great at preventing seasickness

woollen undergarments, unusual spelling but then so is describing a hanky via its pattern and colour

I really ought to read her, return to the old imagist well.