Also, Moons of Darsalon is my most anticipated game but has no release date

If I had a job, I would probably be doing unfathomable things to get a PS5 in time for GT7, but otherwise I don’t think I have anything else to look forward to

I’m getting the PS4 release

same, I’m just worried it will be bad on base PS4 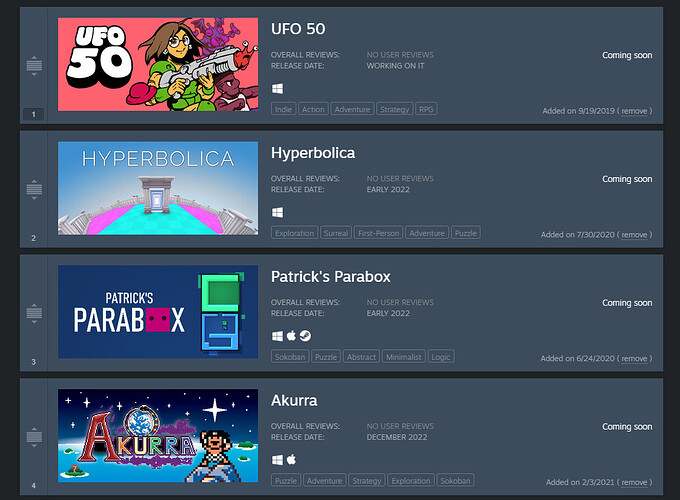 Series S (doubt I’ll get one this year, though)

a remaster of romancing saga 1 has been teased, that’d be nice! the sfc original is super interesting and many years ahead of its time in a couple of ways but fuck me it’s a slog

If I’m being more specific, I want M2 to announce some more of the Toaplan games, but that’ll happen whenever it happens. Also Zero Ranger port? I want to pay them again for that game.

The Pocky and Rocky rebuild. Whatever the next RgG studio thing is. From making another AC game.

I already have half of these on my steam wishlist already (Akurra and Patrick’s Parabox) which means A) good taste, and B) I don’t have to mention them myself. Here are the other games from said wishlist that ideally should be out this year.

I played the alpha version of this on itch a couple years back and while it was small it captured my imagination. I have questions if it is something that can be maintained while scaled up but as an exploratory platformer it definitely has potential.

I have no idea if this game will be good at all, but how this handles cloth physics in a 2d platformer immediately grabbed my eye and I can be shallow about things like that sometimes. Here’s a gif:

Hatch was one of my favorite games from that big racial justice itch bundle. This is the upcoming game from the guy behind it and this seems to be a more “traditional” take on the mechanics that game had.

Lumote came out a few years ago but got pulled from sale for most of that time due to publisher issues. They seem to have gotten that sorted out and are basically rereleasing an expanded version of it.

I don’t know if I need another programming game but the guy behind it made Patterna which is one of my favorite games I discovered via checking the steam new release list every day so I’m willing to give it the benefit of the doubt.

Steam’s getting Death Stranding DC and Hitman III, so I’m probably content with those, FF14, and whatever weird esoteric licensed retro game we figured was lost to copyright in the summer. Capcom AVP? Cadillac’s and Dinosaurs? Seems like there’s one of those every year.

Oh, right and Gundam Battle Operation 2 is getting a PC port, and I am super worried about that because both options (share account between PS4/PC, PC starts fresh) are both bad options. Also waiting for them to put a Zeta in Gundam Evolution before I sign on for that; hopefully bandai doesn’t think their hero shooter will also deserve kernal access.

Splatoon 3 and Breath of the Wilder.

is eschatos coming to ps4 too?

also pocky and rocky, sonic frontiers (or is that next year?)

and the continued golden age of 32 bit fan translations

Virtually nothing gets me hype in advance anymore. If it’s good I’ll get it at a discount two years in the future, or at full price sooner but eh, gotta wait and see.

Elden Ring has got me paying attention to it because Fucked Up Breath of the Wild seems up my alley if it’s basically ok, but still waiting and seeing on that one.

this is the year

I didn’t actually buy any 2021 releases in 2021 and I still played lots of satisfying games. Then again, I think there’s a lot more releasing this year that I’m interested in. I have to see if Legends Arceus is the game that makes me love Pokémon.