Here’s an odd tale for you.

That said, if you would prefer to skip the tale and just get the files then grab them here. 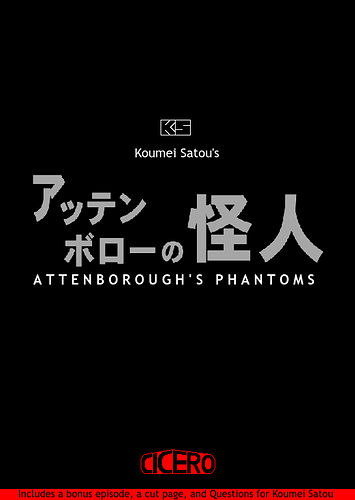 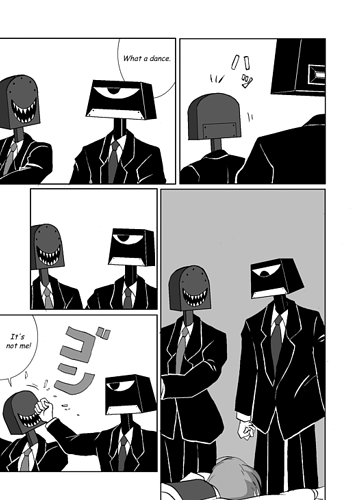 I’ve long been a fan of the various mods for Half-Life, Half-Life 2, and Portal created by Koumei Satou. I’ve discussed them in the past on here and I know folks on here have varying opinions concerning his works. I love 'em. I think they’re amazing!

However, beyond his work as a mod maker he also had a weird little webcomic about robots who wear suits and have strangely shaped heads. I’ve tried, variously and mostly without success, to persuade people to translate it for me.

Back in the day professor_scissors (I miss you, man. Hope you’re well.) translated the title of the comic as “The Mysterious Attenborough.” He got a few pages into it with a college-student’s grasp of Japanese but ultimately moved on to more fulfilling and lucrative projects. Can’t say I blame him.

Never once in my life when I still had money did I think to just pay a professional translator to run through this comic for me, which is quite the indictment of my general lack of executive function, but that’s neither here nor there. It’s not as if there’s even a shortage of folks out there who would have been glad to do the job. Sometimes I just fail to see obvious possibilities.
¯\_(ツ)_/¯

Anyway, I set aside all notions of actually being able to read the comic over the years. Other priorities and what have you. However, within the past year or so I tried to play Mistake of Pythagoras for Half-Life 2 again. Being an old mod that predates HL2: Ep 2, it had long since become an extremely dysfunctional game that required some fiddling to get it to work with contemporary Half-Life 2. Even in its era it was host to some wild bugs I’ve never beheld in any other Source Engine mod or game so it’s no surprise that it accumulated even more barnacles after the HL2: Ep 2 engine updates.

Alas, for whatever reason the mod no longer works for me on my current machine. Even after performing the various rites and rituals scattered throughout different web sites and comment sections to make it function it simply refuses to start for me. It crashes when I start it up. Makes me quite glum. I can’t understand why it doesn’t work; I don’t know how to troubleshoot malfunctioning Half-Life 2 mods.

I haven’t exactly given up on the idea of making it run. Some combination of launch options might be able to get it running but it’s a sad reminder that Valve doesn’t give a shit about the compatibility of older mods when they update HL2 and the like. For that matter it could just as well be the fault of Nvidia or even AMD. There’s no obvious source to blame. Again, that’s only tangentially relevant to the matter at hand.

Apparently this struggle to run MoP isn’t new for me. Some 9 years ago now I left a comment on a video on Koumei Satou’s long-dormant YouTube account expressing my desire to see MoP updated for improved compatibility with contemporary Half-Life 2. All said and done, the mod probably would have worked for me with a few tweaks back in 2013, albeit with a few ugly moments where the mod would freeze for an extended period. However, in 2021/2022 it doesn’t work for me at all.

Anyway, I guess I’m not the only one who felt some frustration on that subject. Roughly 3 months ago I got a reply to that 9 year old comment, but it wasn’t about MoP. It was about the web comic.

The reply came from a fellow named Len Adams, with whom I had no prior acquaintance. For a few months I heard nothing of it and thought nothing of it. He just mentioned it and then dipped for a while. Ho hum.

Then, the other day he reappeared with a new reply claiming that he had translated the comic!

I was skeptical to say the least, yet within a day he produced a Google Drive link with an English translation of the whole damn comic! I was still skeptical. However, I downloaded it and it’s as real as can be. Doesn’t seem to contain anything sinister at all, at least nothing that I can detect. It’s the whole comic, translated into English.

Len Adams, I don’t know who you are but you have my gratitude for this work you have done. Were but that I could locate you outside of the YouTube comment section where you appeared. Alas, trying to chat with or coordinate with anyone in a YouTube comment section is a special slice of Hell thanks to various filters designed to reduce bot clutter (and which, from what I’ve seen, don’t fucking work).

I check in on Koumei Satou every year or so. He has a blog that I sometimes read with the help of Google Translate. On April 5, 2020 he posted on his blog about being unemployed. His last post on there was May 17, 2020.

However, KS’s Twitter has posts from this year, so I’m assuming he’s still alive. I guess maybe I should send a tweet telling him that his comic was finally translated into English. He’d probably want to know it. Eh, I’ll get around to it.

I’m still reeling from surprise that someone finally went to the trouble of translating KS’s old comic. I never really expected it to happen. Good to know someone with the skill to do the deed finally cared enough to get it done. Gives me a strange feeling I can’t quite define.

This is awesome, I love Koumei Satou’s mods too, they’re some of the best things made for source-engine games.

I hope things turn out well for KS

I posted this thread before reading the comic itself. I would advise you temper your expectations vis-a-vis the quality of the translation. I’ve read worse translations for sure, but I’ve also read better.

There’s probably still a case to be made for hiring a true professional to produce a polished localization but Len Adams did a good enough job that you can probably figure out what’s going on for the most part. Just expect some rough grammar and some translations that may be a bit mechanistic/too literal. It’s definitely a translation and not a localization.

I’d say that even without the ability to read Japanese you’ll probably be able to figure out what is intended by a given statement if you’re familiar with the recurrent patterns in Japanese speech. I have a tepid, weeb-level understanding of that at best and more often than not I can read some of the wonky lines in this and think of what would probably be written in a proper English localization from context alone.

That makes it not necessarily a smooth reading experience but certainly one that can be accomplished without too much turmoil.

This is not an attempt to downplay the magnitude of the achievement. Len Adams clearly went to some lengths to make this and I’m still chuffed to be able to read it.

Frankly, if I had funds for a proper localization I’d probably also want to allocate some of those funds towards having an AI pro find/develop a good upscaler for it. The original comic is so old that it’s basically from an entirely different era of resolution standards for web images. Since it’s not especially complicated outside of the line art I don’t imagine it would require a super sophisticated upscaler. It would need a fair bit of denoising though.

Even though I have no method of paying right now I’ve made arrangements to get a quote from a professional translator with whom I am acquainted. If the quote seems feasible then I’ll see what I can do to find some funding.

If this translation effort moves forward it will be a complete, from-scratch endeavor starting from the original web comic in the original Japanese.

I have not shown my translator the work of Len Adams. I have only shown him the original comic in the original Japanese on KS’s web site.

This bears overt mention for reasons I don’t care to delve into.

Update for September 29, 2022: I’m still waiting on the translator to give me a quote but he has told me that he is currently working on the estimated word count. I imagine I might hear something by the weekend. I’ll have to bother him about it.

My translator seems to be leaning towards doing the translation for me as more of a favor than a business transaction for whatever reason. Guess that means I’d owe him one. I can live with that for the moment.

I believe that his plan is to just give me a text file with the translations in it so I guess that leaves it up to me to do the typesetting.

Guess that means I need to shop around for a good upscaler. Waifu2X is the one that sticks out to me as the most immediately obvious choice.

Here’s a paired sample, original first and then upscaled with Waifu2X: 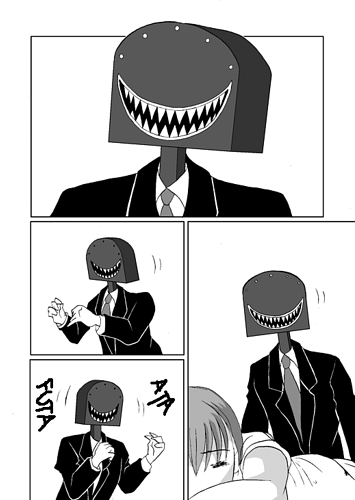 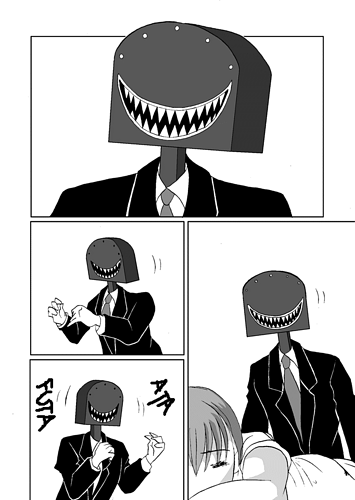 I’d say the upscaled result looks reasonably decent at a glance. It’ll be pretty labor intensive but I think it’ll be worth it for a definitive edition of the comic.

I guess this also means I need to write some sort of downloader to grab the original comic off of KS’s web site. Suppose I could just do it manually but I’d rather not. I do need the original JP language files either way since this translation will proceed from scratch.

It would be nice if I could automatically grind the files through Waifu2x but the web version has a captcha and the CLI version on GitHub apparently needs me to train it first. I wager I could think of a way to obtain training data but I’d probably need to write a completely separate scraper and set it loose on Danbooru/Gelbooru, which would probably make me wildly unpopular with the admins of those sites.

I have no time frame for when any of this will happen.