thinking about first person dungeon exploration in the wizardy/dungeon master vein (let’s say something like nocturne counts too)–what are some memorable level design gimmicks or experiences that you had? interested even in the relatively mundane pacing ones, e.g. falling down a trapdoor and searching for a way back up before you eat shit

i really like the cursed hallway in nocturne’s labyrinth of amala. there’s a long passage filled with gas that does high damage to you and anyone else in your current party (not stock) with each step down to 1 hp, and there are also dangerous encounters throughout. the trick is to count the damage ticks while watching the encounter indicator; while the total stepcount of any given encounter cycle is random, the number of steps between each colored phase of the indicator will be consistent to that cycle. so the strategy is to take everyone out of your party, count the steps/ticks between each indicator phase color change until it gets to the zone where you’ll get an encounter in the next few steps, put everyone back into your party and heal until you hit the encounter, then repeat until you arrive. at the end you get a huge amount of money (which in hard mode probably all goes into buying a single magatama), and then you do it again to leave. the encounter indicator lags in the remaster which makes it infinitely more annoying to do since you have to stand still to make sure it catches up and you can count it correctly.

Thinking about the classic “silent teleporter trap that takes you to a room that is mostly the same as the one you were in but with something off”. Those feel really cool but they were probably hell before automaps.

I giot really into shining in the darkness for awhile and got really good at memorizing the map layouts which took me from creeping into a scary dungeon to feeling like this was a place I lived. Hah now I am the scariest monster here! Right up until Im not.

My least favorite is when the exit is behind and above you, a place you rarely look; sometimes it’s satisfying but mostly I feel like, “raah! you got me, devs!” Funnily enough I learned from this podcast that this is also the least favorite cave design of actual cavers. When they return back to the exit, they must be prepared to distinguish the passageways they came down from any passageways that lead in the same direction, but were previously harder for them to see.

I love dungeons which route you into unexpected places in the architecture–places you previously saw from one angle, but now you’re exploring them in a way that didn’t seem possible before. Going inside the walls is a big one. There’s plenty of early Assassin’s Creed games with cathedral exploration sequences where you find yourself leaping through rafters that did not previously look accessible, crawling into attics within the walls of a cathedral dome, and so on, including at least one sequence near the end of (I think) AC2 which has a lot of combat and does feel more like a traditional dungeon. Love being inside a wall and peering out into a space I previously explored!! Even in Elder Scrolls games, where the tilesets for dungeons become repetitive enough that it gets hard to hide these routes from the player, I can find myself suddenly running around the rim of a room I previously fought in, looking down from a passageway I hadn’t previously noticed. I love that shit. Simple as hell but it’s always fun.

I also love it when architectural spaces have been repurposed for an “unintended” path–there’s one Divine Tower in Elden Ring that does this, forcing you to scale and descend the interior of a tower which doesn’t have a working elevator, which lets you see familiar architecture from other towers in a new way.

EDIT: just realized you meant first person only but these things are still all fun for me in first person. in 3rd person games like AC and Elden Ring you read the environment in a different way but IMO going inside the walls is great no matter where your eyeballs are

This primarily applies to games before automaps, but I love it any time the game rewards you for careful mapping. For example, in a well designed game, once you have an area mapped the locations of secret doors become much more obvious.

I’ve played so many of these I wish I could think of more concrete examples. One level that stands out is the first level of Dragon Wars, the town of Purgatory. The goal is simply to escape the city, and there are about 4 different ways to do it, from selling yourselves as slaves in the slave market to finding a secret door in the city wall. I played that level many times as a kid.

e.g. falling down a trapdoor and searching for a way back up before you eat shit

there’s a room in gemstone, that’s right, GEMSTONE with two doors, and to choose between two doors you either type GO DOOR or GO OTHER DOOR, but in this specific room if you simply muscle memory GO DOOR you go down a TRAPDOOR that knocks you out for two minutes and you have to climb back up

there’s another locked door that you have to get through by donating a gem and praying, but if you forget to kneel before you pray a priest comes out and breaks your knees

I love intentionally taking pit traps to find secrets in Dungeon Master, sometimes the combination of pit traps and teleports leading to entirely separate branches of the dungeon that need to be explored.

I also love encountering peaceful areas in a dungeon, especially if they come as a surprise. Ultima Underworld won me over when I reached the home bases of the two orc tribes and realized I could interact peacefully with them. This might have been the biggest influence on how I design dungeons myself

As much as I love dungeon crawlers in concept, knowing I’ll have to eventually deal with teleport traps puts me off.

That Phantasy Star version on the Switch with the auto mapping feature totally made it reasonable to play but also made those dungeon sequences feel a bit flimsy.

i have no idea how smt nocturne compares in this regard to oldschool wizardries (or for that matter oldschool first-person smt) etc. but it has two incredibly arduous teleport trap mazes (both of which ofc block main plot progression) that required me to fetch the graph paper. youd love it!

shoutout to eradinus from strange journey 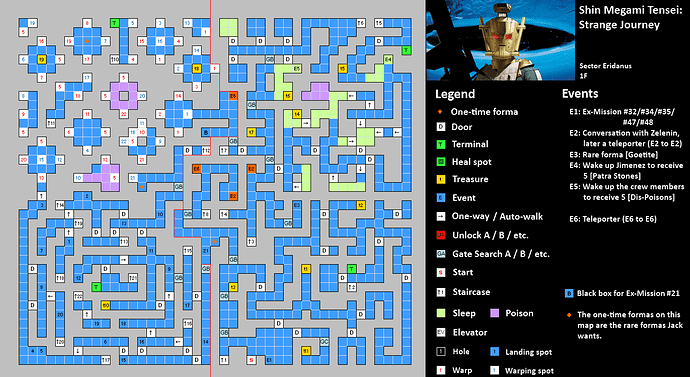 I love it all; the dark rooms, the conveyor belts, the pits, the teleporters (as long as they stay reasonable), the gimmicks. The traps in Dungeon Encounters that lower your money to an unsalvageable negative one billion if you don’t pay attention

There’s something very relaxing about filling these maps and floor hazards make it even better. Has anyone else fallen into every one of the 100 pit traps in a room on purpose just to fill a map?
God, maybe adult coloring books are dungeon RPGs for normies

There’s a maze in World of Warcraft that’s randomly generated and scrolls infinitely, but they twist the connections: scrolling off the top of the map to the north puts you in one of the southernmost rooms, offset by half the width of the map. I’m sure this is babytown frolics to real maze-heads, but given the randomized room exits, it can make the space feel artificially larger. Like, if every room on the map below has exits to the east and west, exiting room A1 to the east would show you seven different rooms before bringing you back to A1 again.

I want to argue that this is jigsaw puzzles