Tales of Arise (from the Grave)

So, it has been five years already

We all know (and knew) where this was going, so I’ll get the obvious outta the way right now … [image] … no ifs, ands or butts (tbh though i cannot comply w/ one of these, guess which one ) So! We do have the usual fare, nice-ish gfx that are somehow a bit sterile/lack behind other titles, [image] a kitschy and almost-unbearable main cast … [image] and last but not least, [image] kill aliens from planet kill on a peaceful mission. What else do you need?

since we had the chance to play a new Star Ocean.
And with me, i mean … moi, probably. But! I have been craving a new animu clichee-ridden JRPG for a while, but to no avail. The studio (triAce) has been gobbled up by some mopho developer, and it is unlikely that there’ll be another SO again… so far, so bad.

Good for us then that there has been a second series that never felt like it can match SO, but rather carved out its own niche - tellingly named Tales of [title].

Well, what can you do, Motoi doing (some bits of?) Soundtrack, there’s a new engine and partially new team … and i finally carved in and bought my first Tales of Title.
I’ve played ToS, which my brother bought for the gamecube, and tried one inbetween that was releases for the PS3, for ~ 20 minutes. Felt like it was ToS Reloaded, dropped it quickly. Now, almost two decades later, back again, woohoo.


Three hours in, do I regret that purchase? 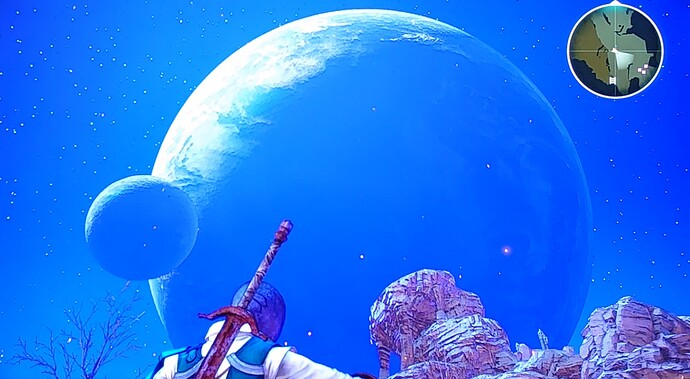 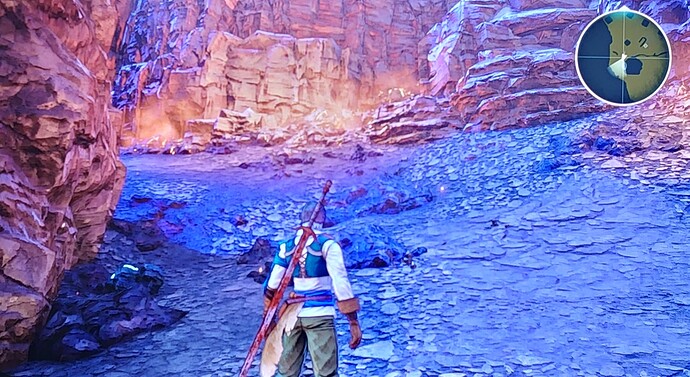 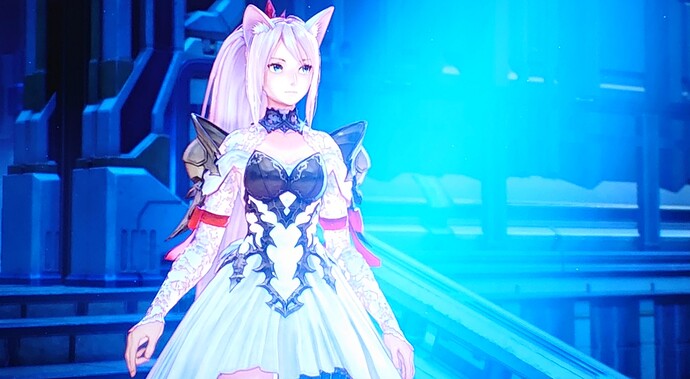 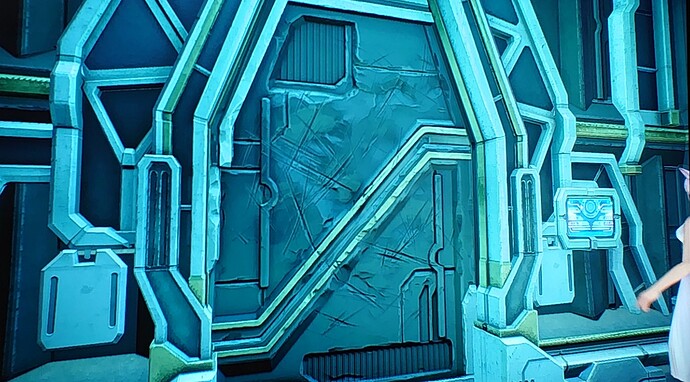 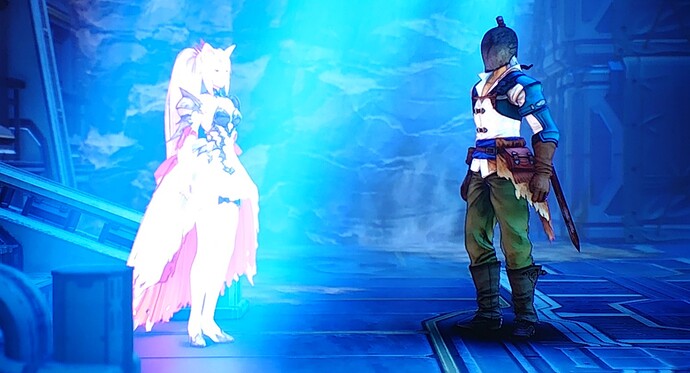 Kinda not!
There are def not stormtroopers with Spaceships and (proper) swords, a lady that can kill people by striking Friend (and Foe) with lightning, rebels, ancient building with futuristic treasure chest, twin planet in the sky, cat ears (and a dog’s tail) and our hero is called iron mask (Kamen something in the japanese sub. no french dub, sorry …

Well, random encounters have been over too quickly so far, Mademoiselle Lightning (not her of FF13 fame) has tried cooking for the first time, and we’ve went to ancient ruins to get her a dress, so…

… this game ticks all the right boxes atm, I am more than surprised and enjoyed my time with it so far.

If anyone else bought this, share your love/impressions/the hate!
Will report back with better pixxx next time.

I want to hear more about this game!

I definitely want to see more screenshots. It’s pretty. I never played Star Ocean or any of the other Tales games and I just installed FF13 off game pass so I’d probably play that one before I played one of these but they are always quite something to look at.

When jumping down from heights, sometimes the character manages to land safely and takes another two steps or so to stop, much like we RL people do. Sometime she/he botches up the landing, with a comment a la how that didn’t go right.
And you keep that momentum even when entering a random encounter!

If you are stupid like me, you think (after sight seeing/leveling half an hour) that you can now pick a fight with a LV 40ish special Monster. Obv got one-shotted after ten, twenty seconds.
Thing is, your PC spells it out loud along the lines of ‘idk whether we are strong enough to fight this yet?’, so i felt stupid for not believing my chara telling me, after all.

Saving manually is so, so quick in this game. It’s almost like my lizard brain is too slow to cancel out of the menu after saving has been finished, and that’s always good in my book, if you feel like you are keeping it from performing better.

At least in the beginning area, it feels like they wasted ressources to dress up the environment when barely anybody/nobody will notice it. e.g. placing cups/bottles of wine/dishes on a table that has been left seemingly in haste by enemy soldiers is … yeah, nice for me, who likes places to feel alive, but i am sure that most people would not give a dime if they cut a corner there and the bottle was using a bit less polygons, or didn’t get textures for a label on the bottle.
As such, I fear that at some point someone noticed and cut the costs, or that the devs ran out of time and stopped decorating their setpieces… and if a player fears that, after four’ish hours in the game, you’ve done a good job that taking it away would feel like a bad thing.

The battlescreen/mode banter between the characters is cool, even if i miss it most of the time, because i am not able to automatically stringing combos together.

Sidestory talk between main cast is presented as comic panels with some moving bits, e.g. facial expressions, eyes, turning head etc. You can trigger through these tho, and at least up until now, the engine handled quick transitions from pose to pose gracefully.

Most NPCs talk didn’t get dubbed, but iirc that has been also the case in SO5, so no bad blood there.

Unfortunately, haven’t been able to remove some bits of the HUD yet, which get automatically shown/only hidden when moving, which is bad for taking pretty pictures of the environment when you have to grab a second device, point, aim, shoot.


all in all, these tiny details/improvements make this typical JRPG standard fare feel a bit above the usual standard fare I've gotten used to over the decades.
2 Likes
SUPERSONNICK September 16, 2021, 6:22pm #5 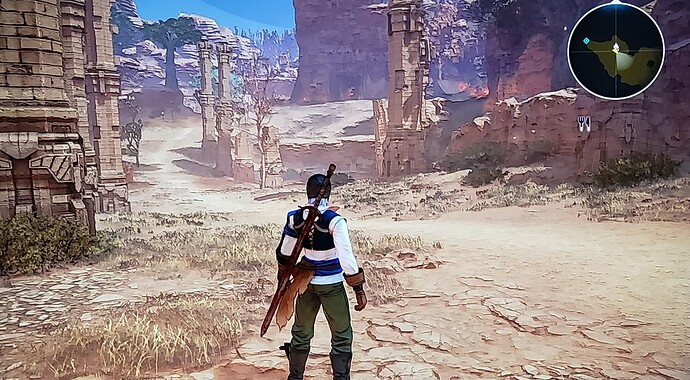 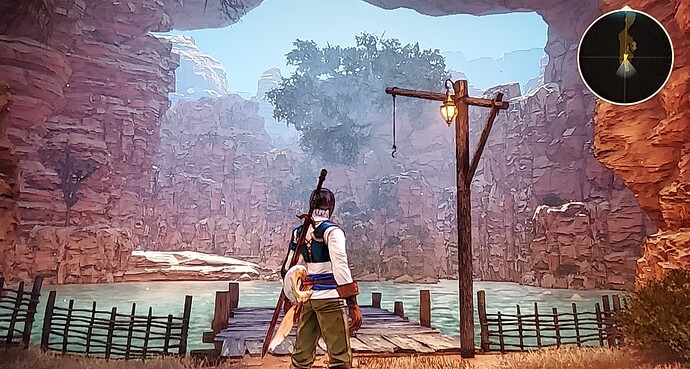 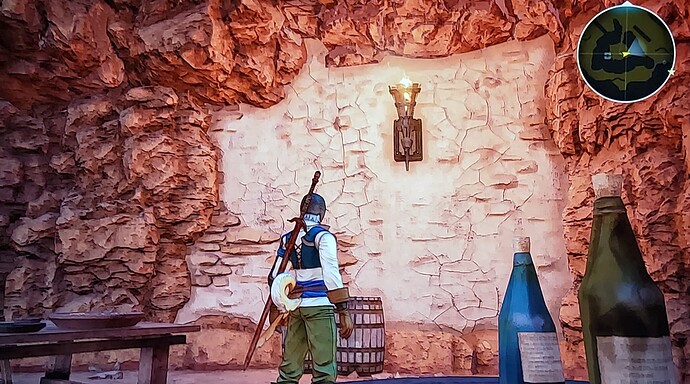 The DP really likes a colorful palette, which fits the game great so far!

ok so i played a ton of this over the weekend!!

this is maybe the most expensively produced FF13 fangame? you’ve got:

all that aside (wow FF13 was really influential for a game everyone allegedly hated) the combat is pretty fun if a little incoherent in more hectic moments and the writing is, well, a tales game? entertaining in a trashy-shonen-anime-punching-a-little-above-its-weight way. i have very little optimism for how these writers handle the political themes they’re setting up but i’m not going to be too hard on something with the core premise of “unkillable himbo + his angry gf tour every anime dystopia trope you’ve ever seen to murder Kill La Kill student council-esque dictators” cuz it’s clearly not going for nuance or subtlety

also also i have no idea how something this pretty runs at like 40fps on my base ps4? namco has some Unreal Engine wizards on staff

Still really do not like the style of this game. Like they’d watched a bunch of anime that ran out of budget mid-season so they had to start using a photoshop filter on photographs instead of drawing backgrounds, but as an intentional aesthetic.

I’m playing this too and it’s scratching an itch I didn’t even know I had, good stuff.

I’m halfway through the second “country” and I’m just sort of getting the hang of the battle system, it’s extremely busy and seems to be well balanced on “moderate” difficulty (the second hardest), which means in this case I don’t have to grind but have to pay attention in random battles and use up items in boss battles.

Also, I just want to mess around a little more with control of my other party members, but the best I can tell is that you are supposed to mainly stick with the himbo because he seems to get killed pretty quickly if I play as anyone else (but my two other characters are ranged so I dunno, maybe this will change later). I did figure out you can direct your party members to cast spells from the main menu, but as of now I’m pretty much leaving them to their own devices and it’s working out well enough. 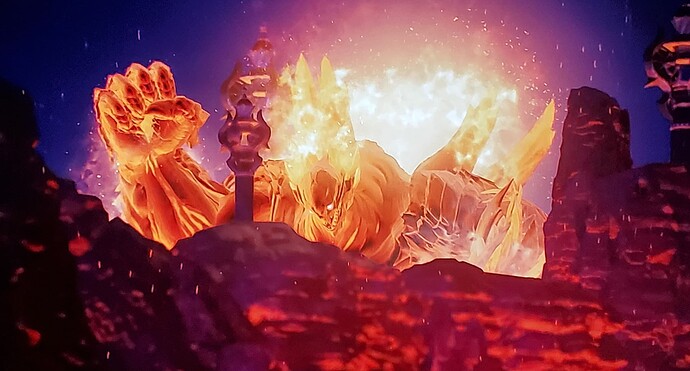 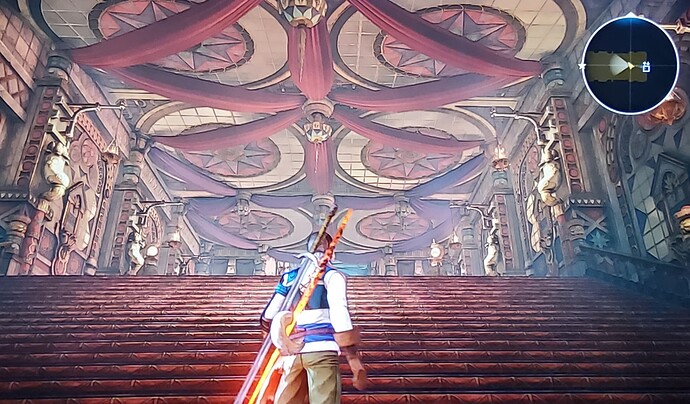 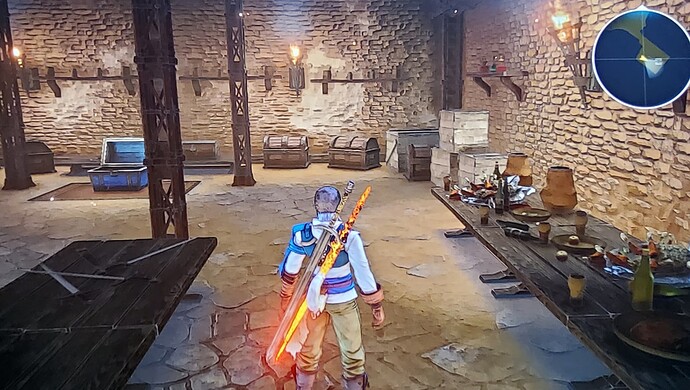 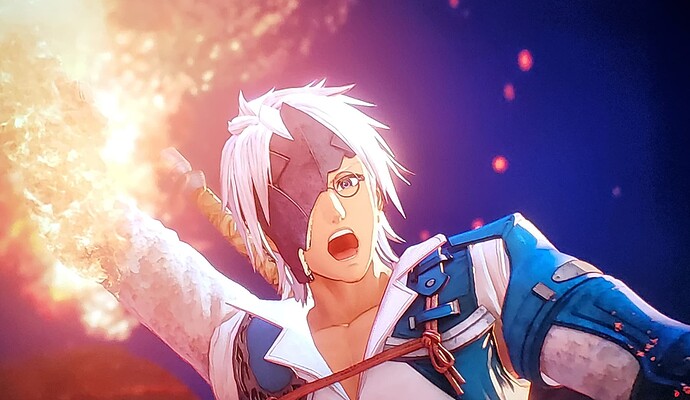 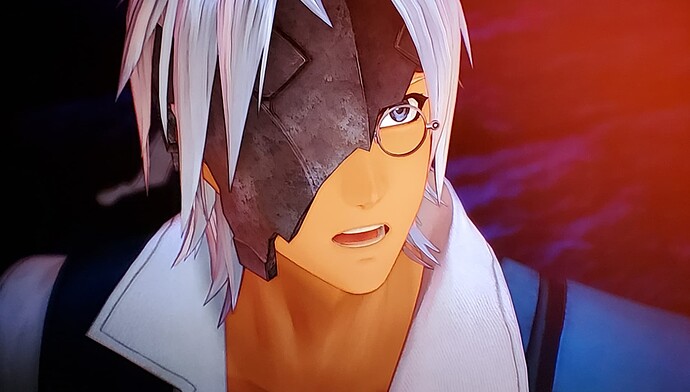 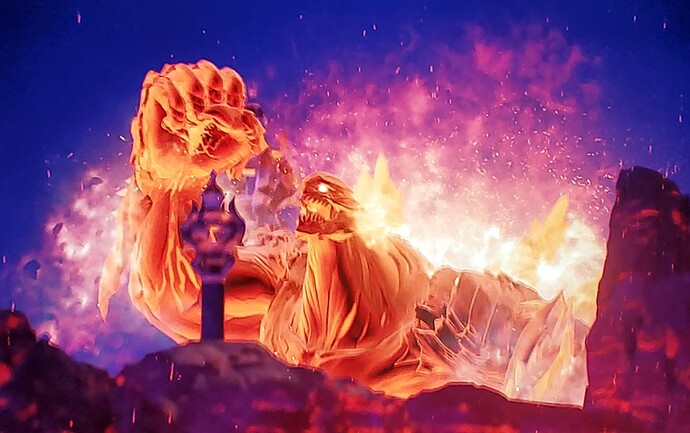 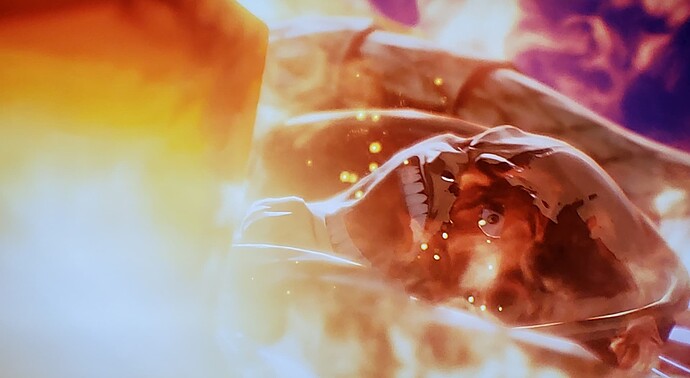 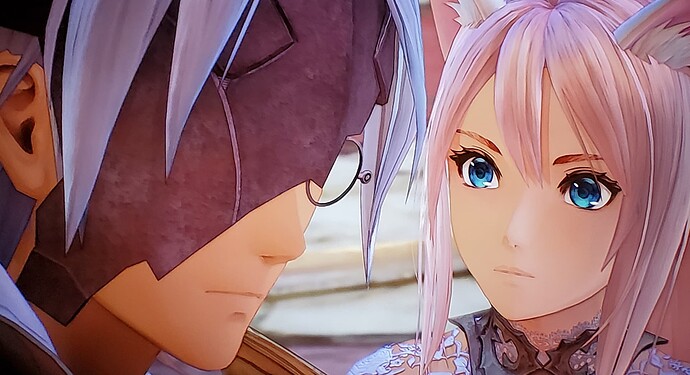 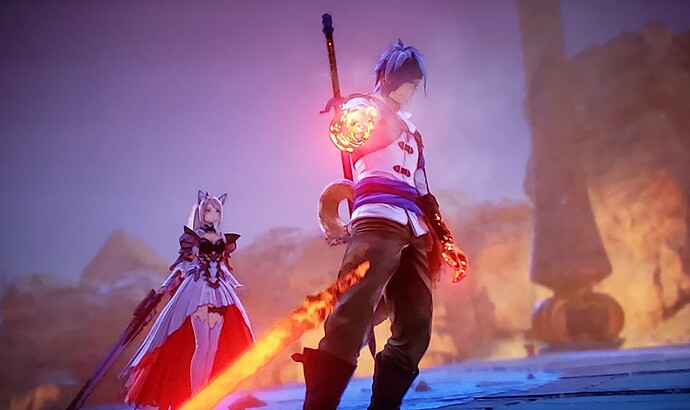 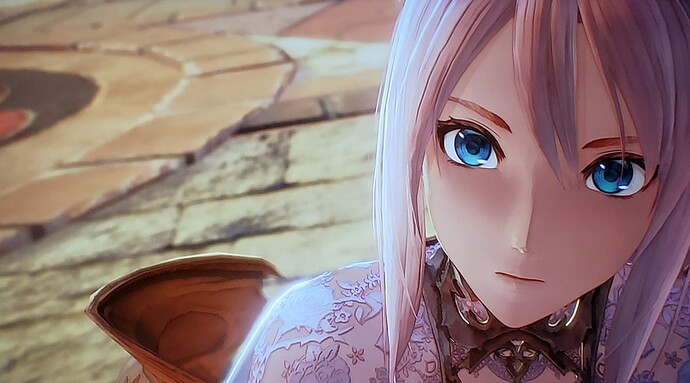 tune in next time, when the catgirl asks if shrug can shrug off atlas.

Srsly though, this game’s DP really likes color grading, and it shows (literally). first area looks already nice, so am looking forward what they will pull out of the hat next, it should get better than this!

The story gets extremely stupid in the fourth area and I usually have a high tolerance for jrpg nonsense. hmm maybe the slaves can be jerks too and have some growing up to do.
wanting to rise up and kill the ones torturing and murdering you for 300 years is a little cringe guys