of plumbers, apes and their adversities (or: of puzzles and platforms)

I wanna talk about puzzle platformers. Because I’m starting to like them more and more as I grow older. This year I played through all Mario vs. Donkey Kong games. Oh boy.

I like that it’s like a hybrid between Donkey Kong '94 and all the rest, already including the Minis you gotta guide in some levels, but also just Mario platforming around in others. And I especially like the stupid story told in pre-rendered scenes, which remained a big source of entertainment for me in the following entries. I am easy to please. What else do my notes say? Oh yeah, looks like the PAL version is an update of the US version, because when I watched longplays to figure out some levels I realized they made a couple spots more difficult by getting rid of some (unintended?) shortcuts. 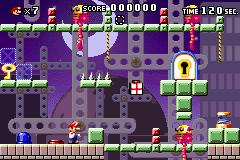 Also TheCuttingRoomFloor tells me that they planned e-reader support and even a level editor, that would’ve been pretty nice.

Mario vs. Donkey Kong 2: March of the Minis (DS)

This is were the series got into its own by becoming more like Lemmings. The DS brings stylus controls and there’s no more Mario to platform with, it’s just manipulation of the environment to clear a path for the mini toys. The pink blocks you can tap to remove or place make an introduction here, they’ll be center stage in the next installment. It’s still more of an action platformer than what comes after, like you can control the Minis directly by making them jump with a tap. Also in a somewhat clever but cruel twist the Minis you save end up being used as ammo for the boss levels, which are just based around timing your shots with a cannon on the bottom, to hit DK on the top screen. If you run out of Minis you are fucked. There’s some rather forgettable unlockable mini games too. This is the first one that officially included a level editor.

Also nice throwback at the end: 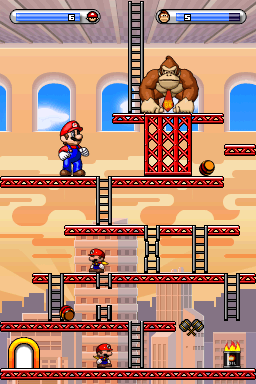 This never got a physical release unless you count the boxed download code they released in Europe together with Minis on the Move on 3DS. From here on out you can’t tap to make the Minis jump anymore, and this one is all about the pink blocks, which you can place and remove in bigger grids now to form stairs and such. I think apart from some DLC levels in one of the later entries, this is the only one that allows this to that extent, which makes it somewhat unique. Sure, it’s a lot of tapping and it can get a bit messy, but I enjoyed the more free-form approach to block placement. 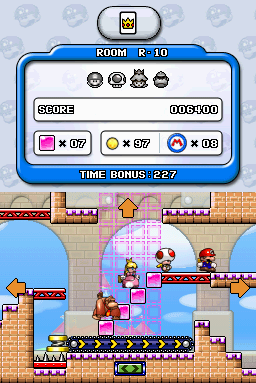 I found this late DS release to be the most refined out of all the Lemmings style entries. I think it’s also the longest one so far with over 80 levels. And it got DLC too? They dialed back the pink blocks again and the boss levels now use the regular level mechanics of guiding the minis instead of using them as cannon balls. Except for the last one. So it’s like the exact reverse of MvsDK2. This one I’d recommend most if you only want to play just one. 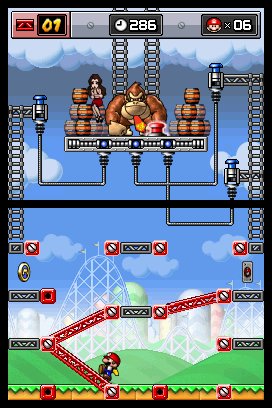 Mario and Donkey Kong: Minis on the Move (3DS)

I love this spinoff which is basically a slide puzzle that you have to solve to allow the mini toys to walk around on. Again, this had no physical release except a boxed download code (which I have, because I’m stupid). It’s the only one that I haven’t seen the credits roll in, definitely need to revisit. 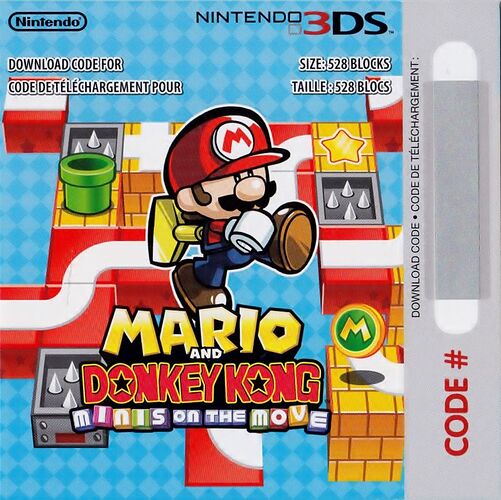 This is another regular entry, and what I’d like to call the beginning of the end. The mechanics are pretty much codified now and it plays like Mini-Land Mayhem, except there’s toys of other Mario characters in some of the levels, and you gotta guide each to their own exit, which adds challenge but can also be annoying. There’s basically no cut-scenes or bosses. Never got a physical release, except in Japan. (Which I have, because…) Probably my least favorite of them all.

One positive thing to note is I do like the last bonus level, reminds me of Pachinko: 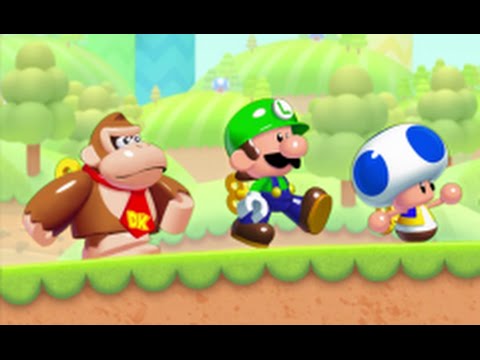 Is this where they sold out completely? Or the best use of amiibos ever? You be the judge. Again, this has basically no story or cutscenes, but at least the different toy characters have different moves now which adds a lot more variety, and of course you need an amiibo for each to unlock them and their sets of levels. Which of course I did, because… oh boy. 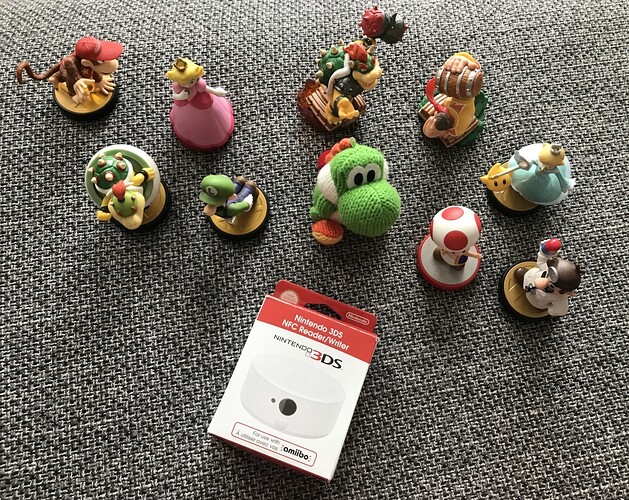 Do I regret playing this series? Maybe the last two. Also I’d like to mention that I didn’t 100% any. Most come with some extra hard bonus levels after the credits or some DLC, and I usually had my fill by then. What I enjoyed most is probably the soundtrack. Listening to medleys and remixes of Donkey Kong Country, Mario 64 and Yoshi’s Island was pretty neat. Oh, and hearing Mario curse when opening and closing my DS.

It’s interesting to see how the whole series goes from subtle diss of consumerism, with Donkey Kong going nuts over mass produced miniature toys, to finally ditching the story when it eventually morphs into what it criticized. Amiibo Challenge making me go nuts and buying a whole bunch of rather useless plastic figures (and one plush) just to access all the worlds was a fitting end imo. Something something about being careful when fighting monsters so you don’t become one yourself.

Did you play these? Do you like action platformers? Pls tell me maybe ok cool.

I had no idea the series even continued after 2

My version of this was DK King of Swing, which I would call a sorta-kinda puzzle platformer. It’s a lot of fun as long as it doesn’t destroy your L and R buttons on the GBA.

The sequel was also fine! Turns out the DS has much worse L and R buttons though so it literally destroyed though.

Also have you played Troddlers? It’s kind of like a combination between lemmings and Wario’s Woods, where you are a character in world placing and removing blocks to guide your little idiot lemmings into the exits. I like the SNES version, I haven’t played the amiga one. You might like it!

The last notable game series NST in Redmond helmed. Honestly, I’m kind of surprised they kept it going, it felt like diminishing returns after the first title and they were trapped between the contemptuous indifference of NCL and an ever-constricting franchise aesthetic.

I just want to say that I still consider the sprites in Mario vs Donkey Kong to be hideous. The game itself is alright (I played the first two and that would be my thoughts on both) but IMO arguably the ugliest thing Nintendo ever produced.

I haven’t played any of these Nintendo ones, but there are several puzzle platformer games that I like. Right now, I’m in the middle of one called Elephantasy that’s half off in the Steam sale but that you might already own if you’ve grabbed some of the recent itch.io bundles for particular causes.

It’s one of those games where every room has a name, and it looks like this. (This is a room where you borrow items that give you special abilities.) 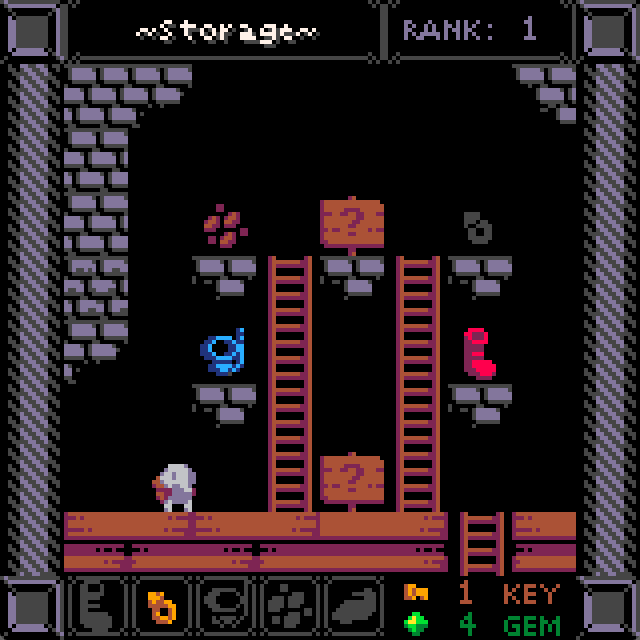 The game seems a little slow at first, but you can set the speed in the options menu if you want to get somewhere quickly. 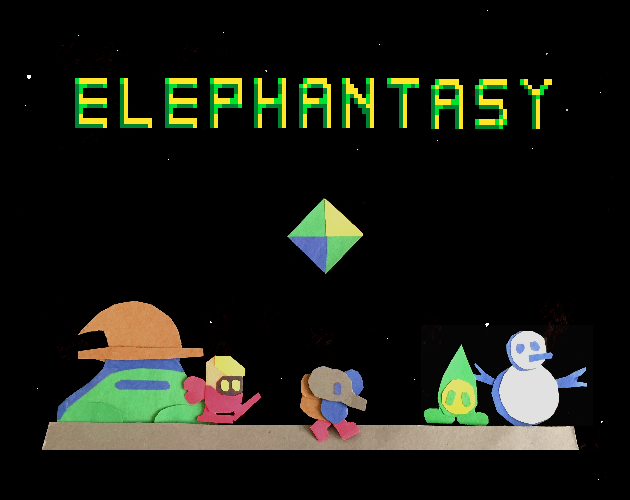 Can you collect all the Gems, reach the Tower in the clouds, and return home?

Elephantasy is one of the games I was most looking forward to from the itch bundle it was in (initially in the Palestinian Aid one, repeated in the Ukraine one) because the dev’s prior game Polymute (not a puzzle platformer, more of a puzzle/adventure game) was one of the standout games from the initial giant itch bundle. Glad to hear it is pretty neat!

Never heard of Troddlers, but sounds cool gonna check it out. Maybe I should’ve made a Lemmings clones Galaxy Oddity thread instead featuring DS “gems” like March of the Penguins or Despicable Me. I guess I can just write about them in here once I play them.

And god damn King of Swing that’s on my backlog too. Which DS model R and L triggers are you complaining about btw? I don’t like clicky ones so I’m not a big can of the Lite or DSi, but the original phat has some relatively big comfy bumpers, even if they are a bit mushy maybe. My GBA SP still has a non-working trigger situation, but they are also tiny clicky ones I don’t even miss them. Maybe I’m gonna play it on the Gamecube player with an original GBA as controller.

The hand drawn DK ‘94 looks best, but I kinda dig the pre-rendered look in the GBA game. MvsDK2 is so hideous though. Mini Land Mayhem cleaned up the sprites a bit and looks most polished and least offensive to me, apart from Minis one the Move, which is its own thing. The Wii U entries just have this all too familar cheap flash game high res sprite syndrome like Wario Shake on Wii. It’s so clean and lifeless on a big TV.

My DS lite was the one where the triggers died. Although come to think of it, it might have been the camera controls in Dragon Quest Monsters Joker being on the triggers that killed it

Glad to hear it is pretty neat!

I just beat Elephantasy, and while I don’t think I’ll have the patience to go back and get 100% it was a good experience.

Blocks That Matter is another one that I liked back when I played some of it about ten years ago. Maybe I’ll pick it up again one day.

Same with Toki Tori. I played this one on the Wii and had fun with it but never reached the end or tried the sequel.

Toki Tori’s real good! I’ve bought the remake but have never had the heart to play it. The modern graphics simply don’t have the charm of the original GBC version, which was one of the system’s better-looking games. Toki Tori 2, meanwhile, is real different, with much more Metroidvania in its DNA (unintentionally?). Very much worth playing–I really should revisit it to try and do things out of sequence.

I couldn’t help but buy the Toki Toris on Wii U just now because they are on sale there too.

I never played the original Toki Tori but the sequel, which is kinda still a puzzle platformer but one that leans much heavier on the puzzle half, is very nearly a true classic IMO. One of the great “oh… OH!” realization-type games when you finally put together what you had likely been missing mechanically up until that point.