Need to see more from them...

Who are the directors, screenwriters, editors, cinematographers, stunt coordinators, actors, anybodies, that have stood out so much to you that you’ve made an effort to see everything they’ve done?

This is really my favorite way to find new things to watch because I start to see the patterns. Works take on a new dimension of humanity. That is, it’s easier to see the people behind the work.

For me, Wong Kar-wai, Paul Thomas Anderson, Orson Welles, Tsai Ming-liang, Jiang Wen, Park Chan-Wook, Na Hong-Jin, and Jia Zhangke are all pretty big deals. I could probably go on. I used to want to see everything from Godard, but I’ve seen very little post 68; I’m a little put off by it. I’m really looking forward to seeing more from Jordan Peele and Bi Gan.

I haven’t seen everything from most of my favorites though. I think it’s pretty rare for me, and it’s nice to know I have a little treat saved for later.

Actors:
Gong Hyo-Jin, because i could watch her play any role, anytime, and i’d still be

Cho-Seung Woo, because he carried Stranger on his shoulders.
Bae Doona because she rocked in Stranger, Cloud Atlas and recently in the Silent Sea.

Staff:
Sam Esmail, because Homecoming did prove Mr Robot wasn’t a fluke.
Damien Chazelle, because of Whiplash, La La Land and First Man. Looking forward to Babylon, which is supposed to release in 2022 iirc?
Billy Wilder, because of his screwball comedies, which i adore

Masaaki Yuasa, because of Tatami Galaxy and Night is Short, Walk on Girl.

think you posted about Almodovar in the movies thread? been making more of an effort to watch his stuff recently. i saw women on the verge of a nervous breakdown sometime last year and it really struck me- all those vibrant colors and the pulpiness of it. soon after, the academy of motion pictures museum opened near me and they had a real nice looking exhibit featuring his work. though, to be fair, it was just a bunch of screens showing clips of his movies and a wall of movie posters 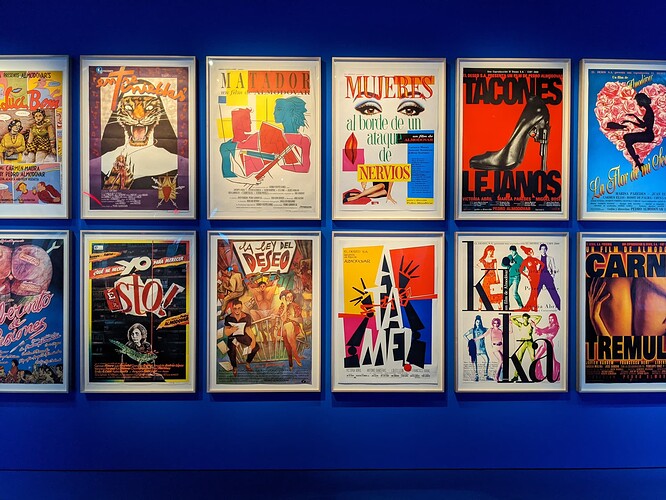 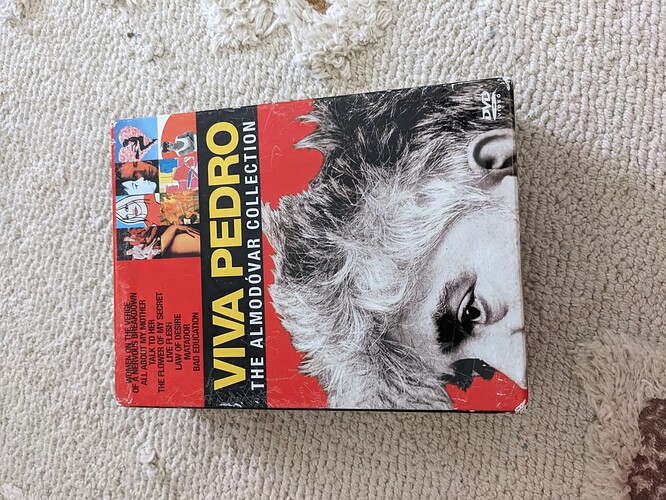 Following directors’ careers is the primary way I choose what to watch, so I could make a much longer list, but these are the filmmakers with whom my encounters were so powerful and in some cases life-changing that I’ve made really strong efforts to get my hands on everything they’ve done and/or keep up with their careers (there are some people whose cinema I really love, including Alfonso Cuaron, Spike Lee, Ernst Lubitsch, Ti West, Ang Lee, Jeff Nichols, on and on, but I haven’t tried quite as hard to catch up with their filmographies, as much as I hope to one day). Most of them, though, have at least one film I haven’t gotten around to yet, which I hope to remedy one day, but it is nice to know that there’s something out there to look forward to, indeed.

I spent more time watching movies in college than any other time in my life, so that inflects my list. A lot of these are favorites from that time in my life. But here goes!

David Lynch
David Cronenberg
Jean-Pierre Jeunet (what can I say, I really liked Amelie when I was in high school)
Michael Haneke (though I haven’t caught his most recent one)
Errol Morris (though I think he may have jumped the shark… really didn’t care for that Bannon doc)
Craig Baldwin (this guy is so cool, wish he’d put out more stuff. Bonkers leftist found footage mockumentaries. I met him a few years ago when he gave a talk in Boston and he was very nice.)
Jan Svankmajer
Alejandro Jodorowsky
Wes Anderson (But I don’t admire him as much these days. I thought his most recent was fun but had some seriously bad politics)
Park Chan-wook
Bong Joon-ho
Hayao Miyazaki

Also, directors I intend to do this with and am somewhat close:

I checked out Bad Lieutenant: Port of Call New Orleans on a lark and laughed my ass off, which kicked off my Werner Herzog and Nick Cage obsessions

After I watched A Separation, I had no choice but to start tracking down Farhadi’s other films. His latest, A Hero, is another good one.

Although I didn’t care that much for Pi, I’m glad other people liked it and that Aronofsky was able to go on and do other things. I think I’ve seen all of his films except Requiem for a Dream. I look forward to seeing what he does next after Mother.

I’m still in the process of making my way through Kurosawa’s films. Some are better than others, but so far I’ve found every one of them worth seeing. Pulse and Cure are at the top of the list, of course.

Ever since @Bee convinced me to watch District 9, I’ve followed Blomkamp closely. He’s never again made anything as good as District 9 (and his latest was particularly disappointing) but I’m still holding out hope.

I’m grouping these together because there’s some overlap. I don’t make an effort to see every Scorcese film but I do look out for things Schrader wrote but did not direct, such as Bringing Out the Dead. And I also like some Scorcese things that didn’t involve Schrader, such as After Hours and Silence.

I just realized that I could go on like this for a while, so I’ll end my post with an intersection that I’ve been exploring in the past year or so. I don’t remember exactly which I noticed first, but I’ve intentionally sought things written by Chayefsky based on the writing in Network and The Hospital (and I guess Altered States, too). At the same time, I’ve kind of been seeking out movies that George C. Scott has acted in based on his performance in (again) The Hospital, Hardcore (Schrader), and, of course, The Exorcist III.
5 Likes
LaurelSoup May 18, 2022, 11:53pm #9

a good half of @a_new_duck’s list, but also i heard about Bi Gan recently and am curious. also Weerasethakul

for how much i love Irma Vep and Personal Shopper i should really get into the rest of Assayas, but Demonlover was such a slog

I’ve done this for a couple directors but most recently my husband and I did it for Wong Kar Wai. Watched almost his entire filmography in like 3 weeks last year. Emotionally destroyed us!!! After we finished we concluded that it was the best decision we’d made with our movie-watching habits in years.

We followed it up by watching a bunch more movies with Tony Leung in them. He’s my husband’s favorite actor and he’s been in so much phenomenal stuff! Didn’t get through anything close to his whole filmography though because dude has been in 92 freakin movies!!!

This thread is motivating me to get my act together and try to start Tony Watch 2022… we can make an even bigger dent in this backlog this year. We can see all of Tony

You can watch every Bruce Lee movie in about a weekend

i heard about Bi Gan recently

only recently? I’ve been yelling about how everyone should watch bi gan since 2015 2017, though apparently not yelling loud enough

edit: I misremembered when I watched Kaili Blues, but you can even find my first post about it here on this very forum, surprised that I was the first to post about his movies

Since watching Brick I have made the attempt to see every Rian Johnson movie in a theater. Only failed with Brothers Bloom, because the movie theater down the street decided to swap it out 2 days before release.

apparently not!! i usually take your recs to heart

oh and in response to this thread, this is how I approach literally everything I like, its not even a special case thing, I obsessively collect, experience, and catalog as much as I can by any artist I like.

After hearing a single song by Rocket from the Tombs on WFMU when I was 15, I collected a complete discography not only of their bootlegs, but every Pere Ubu release and every Dead Boys release.

I listened to multiple Marc Ribot albums because he was the guitarist on a Tom Waits album I liked.

I tracked down every last Kaname Productions anime years before they were easily accessible after seeing some screencaps of Leda on an anime torrent site.

There’s really no limit to my obsessive need to catalog and explore the complete works of an artist, especially as I often discover a fondness for their lesser works (check out Kiyoshi Kurosawa’s Charisma! It’s really good, and I feel like I could draw a straight line connecting this movie to Shinji Aoyama’s films)

Recently I watched all of Joel Potrykus’s films after seeing a tweet making a reference to his movie Relaxer.

I could keep going because I can do this with literally everything I like. This is how I approach media, just obsessive research and hunting, it’s half the fun for me.

Michael Mann for me, for some reason. I think I’ve seen most of his films except for a few.

@anonymous, I was hoping that you would make a post like this. It’s one of the reasons I made the thread!

@whatevering, I was thinking about Almodovar a lot recently, too. That’s another reason why this topic has been on my mind.

It’s interesting to me how my relationship to a creative voice can go from disinterest to obsession and back again. For instance, a bunch of people mentioned Kiyoshi Kurosawa. I never saw Pulse or Cure, but I did see Creepy. I didn’t like it*, but now that so many people have talked him up, I’m willing to give him another try. Robert Bresson was only interesting to me at first because of his status in the canon, but now I actually like his movies. Guess some things really do come with age.

*However, the movie did inspire me to say クリーピーです whenever I encountered something creepy.