Saw some people posting about this game in the GYPT thread and it seems there may be enough of us to warrant a thread.

Anyways yeah the title sucks but I haven’t had such an immediate viscerally positive reaction to the first 2-3 hours of a game as I have with Returnal since probably Bloodborne. I really like this game!!

This game is kicking my ass but I spent the first 5-10 runs exploring everything and picking apart the map each run, but I wonder if that was the right way to go… considering how game changing most of the permanent upgrades are (melee attack especially) I feel I probably should have spent runs just diving towards the target.

Now that I’ve unlocked a few more guns and upgrades I feel like I wasted more time than I should have dicking around in the first area, but then again I kept getting smoked by the first boss until I didn’t so I guess there wasn’t much else I could have been doing.

A lot of the systems are still obtuse to me so if anyone has any tips/tricks I’d be happy to read them!!

I just died on the third boss but I’m digging this game.

My advice is just pay attention to the map, bonus damage is the most important stat on a weapon so don’t automatically grab a higher level one if the stats suck, try to have an astronaut and a healing consumable before bosses, and remember you can peek in side doors to get an idea of what’s inside before committing (i.e. if it’s just a room with a chest you’re probably ok but if you have a strong run going you likely arent going to want to charge into something that looks like an arena if you don’t have to).

Don’t waste ether on cleansing chests, save it for the thing outside your ship (appears after the first area I think) or even better, a respawn spot.

Be cautious but aggressive, don’t stay in one place too long in a fight with a bunch of mobs, remember that holding down dash makes it go slightly further (which means longer invulnerability). Try not to mash right trigger when firing as you’ll screw up the active reload thing 90% of the time.

The automatic rifle with the rising shot perk (rate of fire increases as you hold down the trigger) is super strong, if you get one with decent bonus damage you can hold onto it even if your proficiency is a lot higher.

If you have the controller in a death grip most of the time as I do, don’t like the adaptive triggers or have accessibility needs, there is a “classic” option that maps L2 to aim down sight, L1 to aim the alt-fire and R2 to fire. (though in practice maybe you don’t need aim down sight very much, I caught myself just holding down R2 and turning auto-aim all the way up) All button mappings are customizable too which I wasn’t expecting.

Echoing all that’s been said and check the house (in 1st biome) when the front porch light is on (after a boss?).

Check out the daily challenge from the ship computer by the opening that leads out into the starting map. They seem to give you a pretty amped-up gun and clearing it gets 5 ether. There is a bed you can use to heal in the back room, but don’t know if this can be reused or accessible past the first biome.

If you get complacent you die easier.

It’s wild to me that so far the only game to make me actually want a PS5 is the first year Housemarque game. It would be like if Resogun was the go to game that got everyone talking during the PS4’s first year.

No shade on Housemarque or anything either. They make great games. Super Stardust HD, Resogun and Nex Machina are all very much worth playing. I’m just kind of blown away that they managed to knock it out of the park as much as they have. Normally arcade style games sit in their own comfortable niche but this one broke out of it.

Hopefully it will start a trend that produces more good arcade style games but with the big production investment that those types of games don’t normally get.

The bosses in this game are so good, my god… Three phases with perfectly escalating movesets. Fair telegraphing, but extreme challenge. I just beat the second boss on my first time encountering him, but I survived by a hair.

If you have the controller in a death grip most of the time as I do, don’t like the adaptive triggers or have accessibility needs, there is a “classic” option that maps L2 to aim down sight, L1 to aim the alt-fire and R2 to fire.

Damn thank you for bringing this to my attention. The adaptive triggers are cool and all but I’ve got too many years of death grip under my belt to make it work right. This is way easier.

I’m still hunting for a PS5 so I don’t have any hands on experience with this. From what I’ve seen I really love the guns. They sound and look great. Also love the bullet hell enemies. At this point if I had a PS5 I’d probably get this

It doesn’t have mid-run saves? Why???

Their rejoinder to this is that you can use the rest mode on the PS5 if you need a break, but that obviously isn’t really sufficient. I bet they patch in a quick-save feature at some point.

Their twitter at least said they are “listening to the community” re: saves so it might be patched in.

Found out you can go back and reuse the bed on the ship. Would recommend saving health pickups until your health bar is topped off after resting so that they turn into upgrade points to extend the bar.

From a tech standpoint it actually can be a pretty hard problem to do mid-run saves if you don’t design your game for it from the beginning. Maybe the combination of being a smaller studio + only making arcade games in the past set them up for this.

The other option is that they have some dumb idea that they need to prevent save-scumming. Typically not a good move to make your game worse for everyone just to promote some ideal that doesn’t matter.

It just occured to me that the pylon at the start that costs 3 ether is for unlocking items, not simply getting random items you’ve already unlocked. I’ve been wasting ether all this time. It’s like I’ve missed a third of the mechanics because I wasn’t unlocking artifacts.

It’s nice that you don’t actually have to clear most rooms if you’re just trying to speed through an area to get back to where you were. The doors don’t lock unless you’re hitting a strong encounter.

Regarding no mid-run saves, as of now it doesn’t seem like too much of a functional issue - most of my runs are maybe 15-20 minutes and the suspend feature has worked extremely well to jump in and out, and i’ve found I can even switch to video apps or some games and switch back without the game resetting. Also, the game does autosave your permanent upgrades like ether and gun upgrade unlocks etc throughout the run so even if your run resets you should still keep all of that stuff.

I’m getting my ass kicked in the second area.
Right now I’m searching around the first area until I get a different gun because I find going into area two with just my starter pistol is a death sentence. On the other hand, finding a decent gun upgrade can occasionally feel like it’s taking too long and isn’t really THAT important, especially because you get the big proficiency bonus at the beginning of area two. Am I doing this right? Should I just get better at using the pistol?

Also, Ive had three good runs ended suddenly by rooms with turrets with shields paired together with those bat things that charge at you. Is there any way to disable the shields besides the melee attack?

Regarding no mid-run saves, as of now it doesn’t seem like too much of a functional issue - most of my runs are maybe 15-20 minutes

I’m getting my ass kicked in the second area.

Yeah, it seems like lack of mid-run saves do not become a tangible issue until the second half of the game

I have found a turret disabling consumable item but don’t remember if this needs to be unlocked at the ether machine. (it just immobilizes them so you could just walk up to them and kill for free adrenaline/a few pennies)

I find that there is usually a chest with a gun inside pretty close to the proficiency upgrade. My approach has been to hang out in the first area until I can save up 250 for an astronaut, then move on.

Is there any way to disable the shields besides the melee attack?

One time I was able to destroy a shielded turret with the alt-fire grenade. The database entry on those shields says that they block fast projectiles but allow slow motion through (like the Dune shields), so maybe that’s why. There’s also an alt-fire called Shieldbreaker which I have to assume breaks shields.

I have had a couple of runs that have crossed 30-40 minutes that I’ve had to pause and come back to and I was assuming that when/if I eventually ever unlock the grappling hook it would help me move through the areas a lot faster so I wasn’t sure if a run would ever grow dramatically beyond 40 minutes to an hour, but that might not be the case.

Having said that i’ve got nothing else to play on the PS5 anyways. dedicated returnal machine 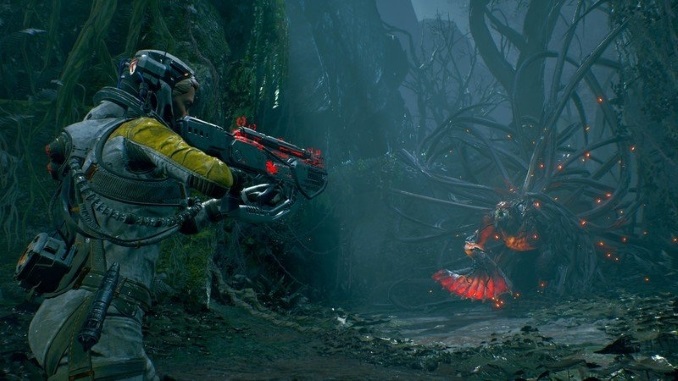 Returnal feels like something planned in 2018 to be a Big Game.