Jamarion Silksteel was a man with a purpose, that was obvious. Things were bleak back then - we only had one system on our side, funds were limited, weaponry was practically nonexistent. Even with Fiasco on our side, things seemed hopeless.

He signed up for the rebellion, but it was clear he had other goals. He was here for the money and intel. Armed with a concussion gun (16 shots, loud as hell) and not much else, he started doing the work. First it was a small job, stealing some knick-knack from a nothing little trader ship. Then it was a big job - rescuing a political prisoner from a huge Sovereign ship. Same tools, same results.

Nobody doubted that he was a violent man. He eventually took to carrying a massive wrench along with his concussion gun - I can only imagine what he was doing with those in tandem. We didn’t question his methods, and he kept delivering results.

The weird thing was the body count - it didn’t exist. Hell, he once brought an assassination target back to the base, kicking and screaming all the way to the drop point. Getting smashed in the head with a wrench isn’t the best way to end your day, but it’s a hell of a lot better than the alternative.

He only killed anyone once, a Sovereign job that went wrong thanks to some bastard with a Glitch teleporter. He picked up a nearby gun and fired without thinking, and that was that. At least, that’s what the security footage seemed to show - it was almost too fast to process.

His demeanor changed after that, somehow. He walked faster, made less eye contact, barely talked, as if he was racing to a finish line nobody else saw.

Still, the jobs got done, and soon another system was clamoring to join this newly effective rebellion. Then another. And another.

Then one day, Jamarion Silksteel left. And he didn’t come back. Rumors that he was dead started circulating, or worse - that he’d defected. For days it was all that people could talk about.

And then he did come back, carrying a girl no older than 12 over his shoulder. She wasn’t struggling, but she was alive. Barely. He rushed her down to the medbay with more urgency than he’d ever shown before, carefully laid her down in the chamber and let the docs go to work.

He never left the medbay, not until she opened her eyes. That’s the first time I ever saw him smile - like a wave breaking on a rocky shore in slow motion.

And then he left, and we never saw him again. But he was the first legend of the rebellion. Many more would come after him, but none would be like him.

okay this was a post about how embarrassing this is but i take it back, this is good and i do cool shit, sorry for doubting myself everyone 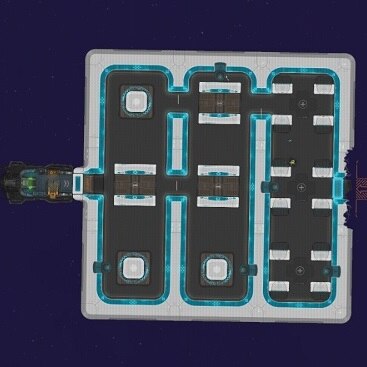 The following is a brief guide for how to return to reality if (by no fault of your own) the exit terminal within the simulation is destroyed....

this guide is good

“They call themselves the ‘Shotgun Ninja’, can you believe that? Where the hell are they recruiting these people??”

I had heard that, right from their mouth in fact. Bar tending in a rebel station meant I was bound to meet the galaxy’s weirdest murderers.

“Everyone needs a name, I suppose.” I said it seriously but I’m sure my smirk gave away what I really thought.

In all honesty, I probably would have called myself something else too if my name was Fornax Alphecca. It doesn’t exactly roll off the tongue, not like the Shotgun Ninja does. And at least it’s an informative nickname.

Nobody took them seriously at first, but they were quite serious themselves. Right after they were recruited, they showed everyone in the bar their shotgun - unloaded and safety on, of course - and said it was from their mentor. Apparently she had died and her last act was to gift this shotgun to Fornax - they pointed to a stain that looked suspiciously like rust but they claimed was her blood.

People began to take them more seriously once the bodies started piling up though. We all knew war was bloody, that this wasn’t a pretty job for any of us. But Fornax…well, they seemed to take it to a whole new level. Shotguns were one thing but in their own words, “the way of the gun is the last resort. A true ninja lives by the blade.”

It sounds silly when I write it down, but the aftermath of their jobs were anything but. They nearly always hijacked the entire ship, killing everyone on board. Every addition to the fleet was worth it, but I wouldn’t say that to the people who had to clean up the mess.

Not every ship made it back in one piece. The story of how they “slew an entire crew in less than 30 seconds” appeared to be true, based on the timestamps in the logs. But the multiple explosions from damaged engines and rigged crew members told a story of panic rather than skill. And it was a hell of a repair job.

Still, they were merciless and effective. The results were messy but obvious, and made us rebels look like we might be an effective resistance after all. Systems joined us one after another, practically jumping and waving their hands with excitement. It was working, and Fornax was leading the charge.

One day they showed up to the bar with some kid in tow, marching them around and saying “This is my kid, don’t they look just like me? Can you believe my kid was dumb enough to get caught? I had to save them you know - hardest mission of my life.” We all rolled our eyes, including the kid.

But after that, things changed. Fornax seemed desperate to write their name into the very fabric of the galaxy. The jobs kept getting harder and Fornax kept showing up with fresh wounds and more bodies. And the legend grew.

Their desiccated corpse was tracked and recovered not too long after, and the video logs from their ocular implant showed a frenzied slaughter, somehow both gleeful and desperate. Then a stray shotgun blast, an explosion, and that was the end.

“Hold on, you’re saying she went onto a Glitcher ship of that size with just a wrench?”

He’d told this story a hundred times before - I’d heard almost every retelling - so he knows exactly what he’s doing. He smiles and pausesfor the perfect amount of time.

He drinks in the laughter. The story of Musca Sitwala never fails, as long as folks have had a few drinks. He looks around the room before continuing.

“Two wrenches. That’s all she ever took. She had a pile of guns back at the base, and she always brought back more, but she always left with just two wrenches, like she was going to the hardest plumbing job of her career!”

More laughter. I’ve heard all the punchlines before and I’m not drunk, so I don’t laugh.

I knew Musca as well as anyone did. Something about going unprepared, with tools unsuitable for the job ahead, it seemed to make her feel okay about her actions. Some bastard had murdered her brother, who was also a maintenance tech on the base, and she was out for revenge. But it seemed like death was an equally acceptable outcome to her.

I think that rolling the dice with her own life was a substitute for ethics in her mind. As long as she risked it all, then launching a few people into the vacuum of space was justifiable.

Someone asks for another drink and I come back to the present. The crowd isless boisterous now that he’s at the dramatic part of the story, the capture.

“…was the first time she’d been hurt, and that bullet wound barely missed her heart. She was lucky to be alive!”

Actually, it was two bullet wounds, neither of which was even close to fatal, but getting shot in the leg and the hip is less romantic I suppose.

“After she healed up - I stayed by her side as much as I could - she was determined to do it again. I tried to convince her revenge wasn’t worth dying over! But she wouldn’t have it.”

I bite my tongue. He wasn’t even at the station that week! He was off god-knows-where, rustling up some intel and trying to sleep with every person who even looked twice at him. But he’s right - she was dead-set on it even if it killed her.

“And so she was gone and back in almost no time - still with two wrenches. But this time…she had him. Bound and gagged and a little worse for wear, was the man who murdered her brother. Apparently she blew up part of the ship and launched them both into the vacuum!”

That part was true, at least according to Musca. She confided in me later that she almost murdered Albrecht, the man who murdered her brother. Instead, she diverted her aim at the very last second to hit the fuel tank instead of his skull. And yes, she had a gun this time - that part of the story always seems to get forgotten.

“Well, I don’t know where she is now, but I sure as hell know where Eniko Albrecht is - rotting in jail for murder! Probably wishing he’d never seen a wrench in his life.” 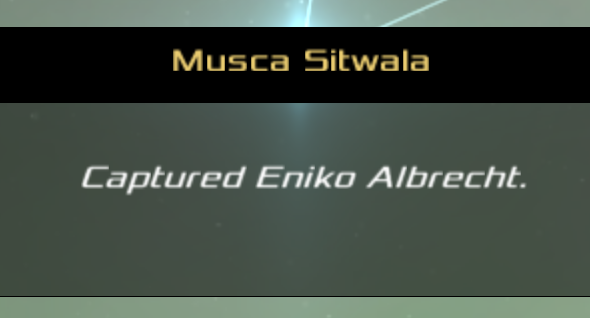 This is a really cool idea for a thread.