a pointless analysis of the graphics compression in batman (gb)

don’t know why i did this but i reverse engineered the graphics compression scheme this game uses. it’s very simple, but it turns out it’s not very well-suited to pixel art.

basically, it takes a byte and uses its bits to keep track of which of the next 8 bytes of the output is a repeat of the previous.

the issue with game boy pixel art is that byte-by-byte repetition doesn’t happen too often. one reason is just the density of detail in the art. another (more technical) reason is that because of the way the game boy encodes its graphics, but if you had 4 squares of solid color, two of them wouldn’t even compress. it’s kinda stupid how sunsoft chose to handle it, in a way.

at the very least, it turns out the rom is very well-organized on the inside. each bank with assets just has a bunch of pointers at the beginning, so once i got the decompressor working i tossed the pointers at it and a bunch of graphics popped out for free (sometimes, technology is good)

anyhow, i configured my script to dump out some nerd stats (higher percent is better):

(removed some duplicates, may not have caught everything)

the best compressed chunk of graphics (bank 4, file 0) has a compression ratio of 393.85%. it is entirely blank space, so it’s probably mathematically provable that’s the best case scenario for the compression scheme.

here’s what one of the worst compressing ones (bank 3, file 0x03) looks like. it’s 62 bytes bigger compressed:

densely packed and detailed, by some standards, but simple-looking enough that you just know a slightly better algorithm could crunch it down easily.

also, i don’t actually recognize these enemies. i think they might actually be unused (!!) (or are they from a different game?)

here’s what one of the better compressing ones looks like (bank 3, file 0x13):

lots of blank space, as expected.

bank 5 is full of cutscene graphics. some of the files there have a compression ratio in excess of 200%. i wonder what they look like:

i’m pretty sure that’s a tilemap, actually. that would explain it.

maybe i’ll figure out how to recompress this stuff, and that will inspire someone to make batman minus infinity (idk)

well, i managed to get a recompressor working last night. compression performance appears to be the same, though it’s not like there’s really any tricky optimizations one could do with the format

now begins the harder part: refactoring my code so it’s properly reusable in a build system 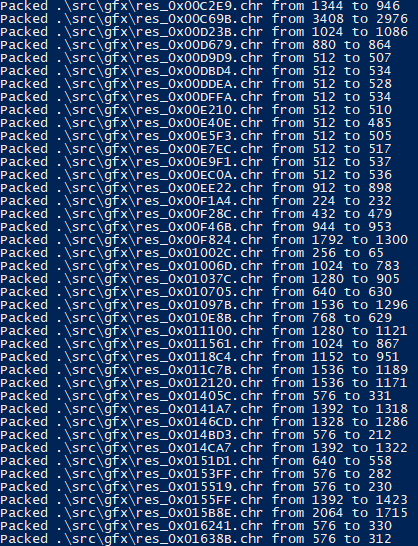 now to just plug the script into the .bat file… 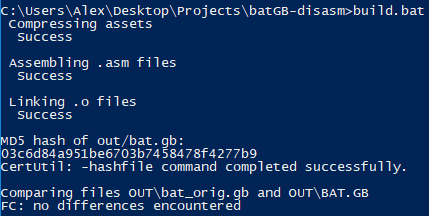 (sorry makefile lovers, but i couldn’t resist the pun)

level data appears to use a very similar form of compression, with just a couple minor differences. shouldn’t be too hard to work with.

Levels maps are in bank 7 (the last bank). They almost use the same compression format as the garfics, but the difference is subtle enough to be annoying. Still, it’s clear their compression works much better in this use case:

As compressed, all levels are 20 screens long, with each screen being 8x8 metatiles in size. This applies to every level in the game, even the boss fights — even though those would have ended up much smaller if they only needed to compress 1.25 screens instead of 20. (They could have hidden a secret message in the unused 18.75 screens, but they didn’t.)

As part of the decompression process the level data is also directly converted from 16x16 metatiles into their 8x8 tiles, where they are stored the region of WRAM spanning 0xCC00-0xDFFF (that’s like 5 kilobytes). (Metatiles themselves could be considered a form of compression themselves, but that’s a philosophical discussion I’m not interested in today.)

Anyhow, the levels’ metatiles are also stored in bank 7, though they’re uncompressed:

Some of the tilesets have a lot of blank entries at the end, so they could have saved a couple hundred bytes there if they needed to.

Adding the metatiles to the previous totals, we get the most important stat: how well did it fit?

If they didn’t use compression one the level data, they would have been over 1.5 kilobytes in the red, forcing them to play data-tetris to cram everything in. As it stands, the compression gave them enough breathing room that they could have almost fit in two more levels.

(I just realized that I forgot the pointers at the beginning of the bank in these totals, which account for 52 bytes. Too lazy to bother fixing that though.)

Anyhow, level compression is now part of the build process (funny what you can do when you take a day off work): 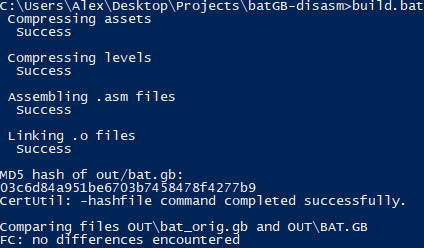 Next I’ll see if I can figure out how/where enemy data is stored, what ties particular tilesets/songs to each level, and then probably make this public.

just think how much you’ll save on cartridge costs!

(that’s code for: i’ve done as much as i want to for the time being)