3D modeling and other things i make!!!

ive been learning blender off and on every few months for the past year and i decided to share everything i’ve made so far on the internet!!!

i guess ill go in creation order??? my memory is really bad so i dont have much to say about early stuff

the first video were two of the first projects i actually finished i think!!! i had tried and gotten far into the donut tutorial that most everyone recommends you start at a couple times before i made this one but something stopped me from finishing them and well anything!!! until i finally forced myself to make this one… those five seconds of a donut on a plate spinning forward is what sprung me forward… to creation… the couch was the next thing i made and finished because why not??? i think??? it was a lot easier and rewarding for me to follow tutorials when i started out then now because i had no idea what im doing!!! now i have some idea which means i wanna make my own things but still dont have all the knowhow so it can get… boring… 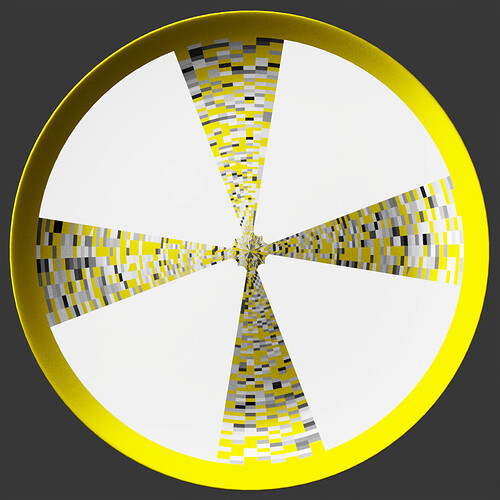 and a chair i made that was also from a tutorial from the same guy and i think i made it after the couch??? 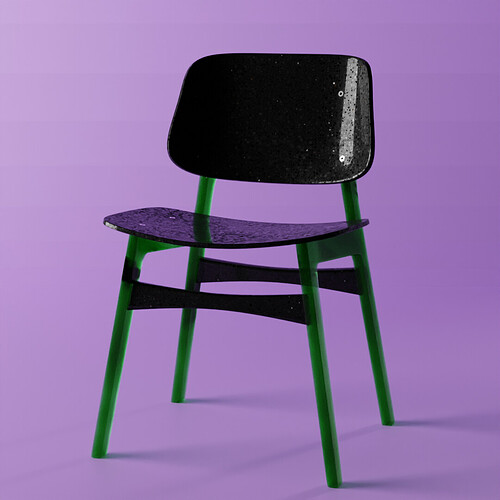 breaking news!!! i found out my first thing i ever made was this house and i think it’s actually the first project i ever finished because you can’t really improve on this baby!!! 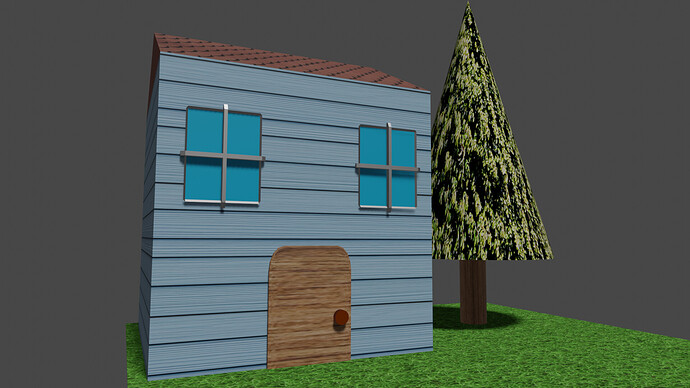 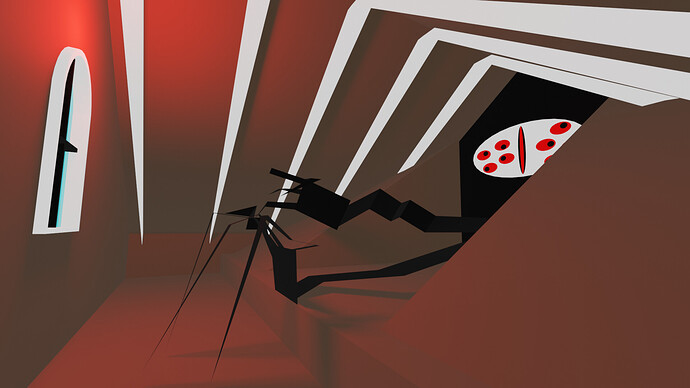 and a character model of a mouse that i was working on and never finished that i might return to some day??? 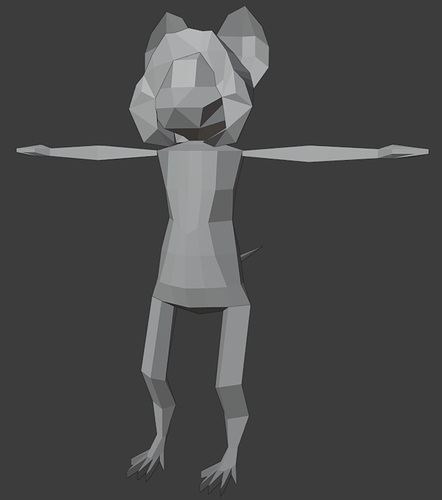 after that stuff my next thing was this video

i think i spent a lot of time on the logo it looks like it at least and i made this over a month!!! it was my first big animation and someone asked me to make it and i basically animated everything using shapekeys and keyframes, i still have a hard time figuring out how to use shapekeys though!!! all the models except for the simple ones i found on other websites for free you won’t believe the kind of stuff you’ll find for free on the internet!!!

after that though i didn’t really touch blender until four months later, my computer wasn’t really excessible until then!!! so i went back to the basics and learned how to make a cute frog and some other things

the first little thing was actually made back in november i was just testing out the physics i think!!! but the rest were made after i got into blender again. the frog was fun to make although the tutorial i used wasnt as clear as i wanted or maybe i remembered more then i thought because a lot of the steps i did werent actually mentioned in the tutorial at all!!! its a good one though im really proud of the shirt i made 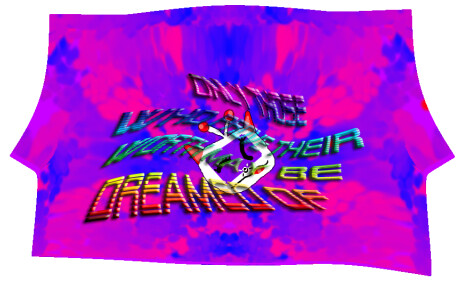 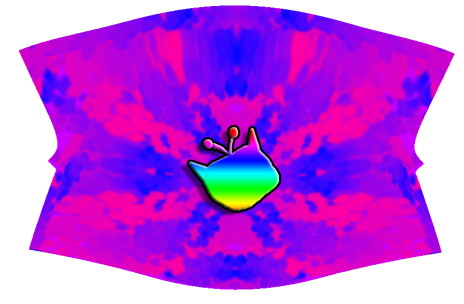 the little animation after that was a simple model i made of the God Slug who is the creator of a giant forest world ive been writing about!!! maybe you’ll know more about them some day… it took me forever to figure out how to make the void part of them “see through” and i found it in a hand off comment in a tutorial for a thing that wasnt relatedable at all!!! you just use the window option in the texture coordinate node in the material nodes!!! im glad i know now!!!

and the spaceship explorer was a little animation of a character i wanna make more things about but got so caught up in making the spaceship that i had to take a break from that project after working on it. i liked what i made though!!! i made the controls to look like a arcade machine!!! i learned a lot about vertex groups while making it 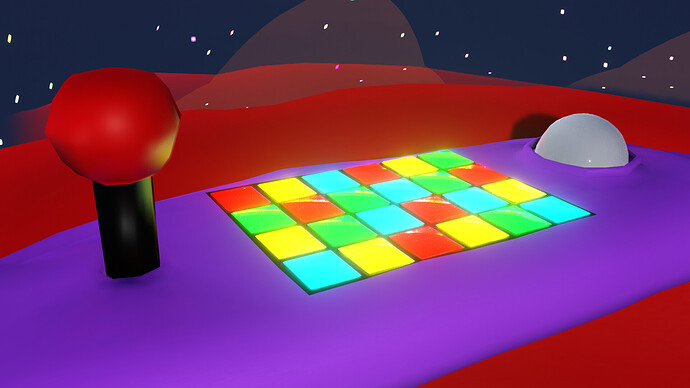 i also am very proud of the helmet the material is all procedureal!!! and the hair was an accident while making something else and the i realize how cute the pigtails were!!! 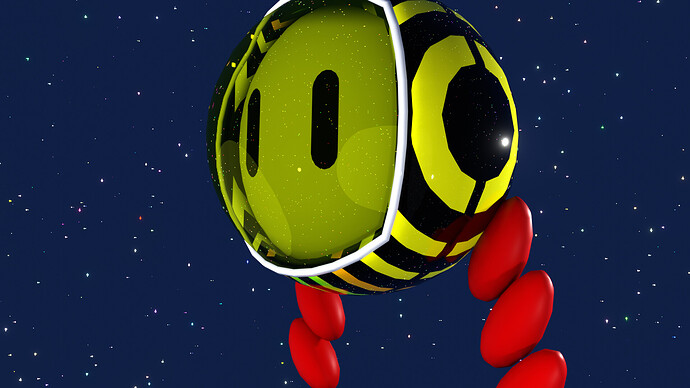 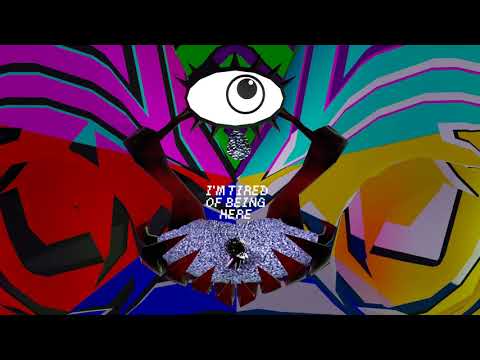 i wanted to make something cartharcite so i made… this. i was inspired by all the weirdcore videos ive been watching but it became something else instead, something more personal to me. ive been drawing things like this in my notebooks but this is the first time i made something out of it. its my favorite thing ive made still and also the hardest to watch. i want to make more tortured creatures like this one, i like the idea of of exploring a first person 3D dungeon like doom full of trauma npc horrors ive made which is what made me make the second video after i thought i was finished with the project. i made this gif too

the music is this song slowed down and reverbed

i dont have much to say about this one. the lyrics really relate to how ive felt lately and its soothing to hear. i was listening to it before and while i was making it. i wish i animated it more but this one took so long to render because of the caustics and the amount of polygons from making such a large scene. my graphics card isnt the best for 3D modeling. i liked the telephone poles though i used an addon that lets you make all sorts of signs and poles.

finally we have something i just finished making a few days ago and its been my biggest project yet (warning it has a jumpscare!!!)

i liked this one alot!!! i had bigger plans but i kept making them smaller and smaller until what you see now!!! i was gonna have it switch between two rooms but i made all the models myself and it was like… 60 models. it was alot!!! i spent several hours over 8 days making it!!! it was inspired by this video which is why i tried to make it look like a miniature made out of clay and wood

there are a lot of things i wished i could have done differently though… i would have made the shots last longer but i never bothered to use more then one camera so it would have been a lot of work to reshoot everything… there are other things but i forgot. luckily i wrote down what i learned and what i could have done better in a document somewhere so i can learn from it for next time!!! i knew i had more time to work on it, i planned to post it online on yume nikki’s anniversary which is june 26th, but i was getting burned out and also i wasnt sure if i’d be free to keep working on it because my life is uncertain so i knew id be happier if i finished it now instead!!! and i am!!! if i want to i can always return to it later and add in what i wanted to do but didnt have the energy for. it was a big learning lesson for me because of how big the project was and how much models i actually made!!! for nearly all of them i didn’t even follow a tutorial for, i just eyeballed what i saw from screenshots and went from there but there was still a lot of things i had to learn from tutorials like putting animated sprites in blender is actually way more complicated then you’d think!!! also fun fact: i tried to replay yume nikki while in the middle of making this and could only do one 3 hour session where i felt tense the whole time and then saw something that made me have a big cry breakdown but i felt better after, maybe ill return to it when im in a better spot to

and that’s it so far!!! aside from some things ive made based on other tutorials ive been following. ive actually started filling out a document full of tricks and tips ive learned and its like 20 pages now. right now ive been working on making a duck based on my animal crossing character but they are nowhere near ready yet. its part of what i want to do next, i want to make character models based on my OCs that i can use in animations and games and stuff but thats going to take a lot of effort and learning!!! i might end up making another animation ive got in mind instead or one of those creatures iwas talking about earlier. or a little picture book. speaking of books!!!

i found out i was in the process of putting 5 zines i made before online but never finished it so i did that today!!! you can read them in your web browser here: 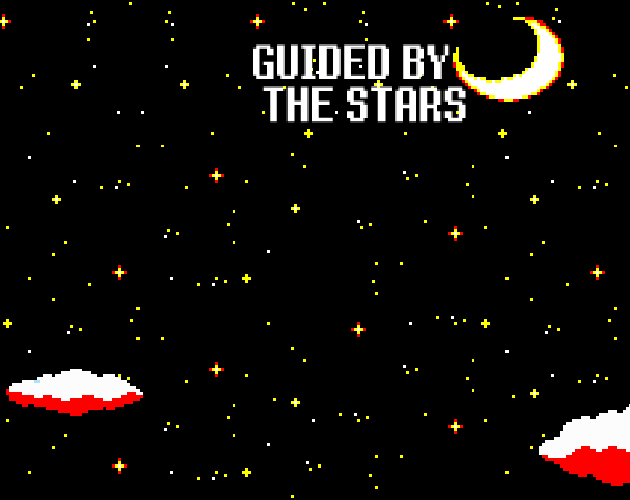 i don’t know if i ever linked them here but they’re great!!! the last one i made was early last year and it’s color!!! here’s the pages without text but its best if you read it first it’s really short!!!:

hey this is fucking great jeeez

This is all wonderful stuff! I love how you’re expressing yourself through your art. Love the vibe. It’s really cool. You had me since the donut video. Oh and that cat is a real creepy MFer!

Your work is great! So expressive of your personality and aesthetic, the videos are charming.

the material is all procedureal!!!

I’m also learning blender and I love figuring out ways to do different materials and procedural textures and all that!

The apartment video is great, love the really heavily bumpmapped textures and the effect of the sprites on top, the mixed media look is really cool!