You are SpamZapper 3.1 is a new Twine game I worked on from late April until this week. Play as a spam-blocking mail application plugin in 2000, and slowly uncover secrets about your user’s friends while having a massive mental health crisis. There are some puzzles later on, but I designed them to be as trivial and brute-forceable as possible for narrative reasons.

Painfully obvious inspirations were 3 in Three, Digital: A Love Story and Secret Little Haven. However, unlike the latter two, I tried to write this in a very “anti-nostalgic” style, where I reference pop culture and “retro” aesthetics as little as possible. It’s not a fond memory, it’s just the past.

I did this mainly as an experiment in seeing once and for all whether I really did enjoy fiction writing or not, after a few decades of considering myself a “creative person”. I’m afraid to report my results from this were “it’s complicated”. I do like this story, but it’s not something I’d consider a window into my soul, so to speak.

Oh dang, gonna check this out after work. I am very sympathetic about ambivalence toward creative media right now.

I do like this story, but it’s not something I’d consider a window into my soul, so to speak.

This reads as an endorsement to me, the idea that every iota of artistic output has to be powered by the deepest recesses of the artist’s personality is destructive to the long hard work of creation imo

I played/read through this. I’m not familiar with any of its stated influences, but I liked where the story ended up going. Playing with the idea of personal identity is something I always like to see.

I appreciated the puzzles being “brute-forceable” because (maybe due to my lack of experience with interactive fiction) I found it slightly difficult to shift from consuming the narrative to remembering things/figuring things out. Even though the answers were simple and made sense. Maybe my mind was just in reading-a-story mode.

THIS IS INCREDIBLE WHAT THE FUCK

This is one of my favorite pieces of IF of all time now, god damn

I know, right?! And what of the trailer?? 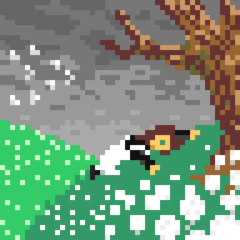 gotta say it this is a sick ass text game trailer