Hello. My name, as some of you well know, is Commissioner Greer, happily serving our fair city of San Javier California. I’ve recorded this tape in order to help to educate you on Parasites and their Hosts, in an effort to better raise awareness in our schools and our community. You no doubt already have some familiarity with the acts of Villains and Heroes. But, with this tape I hope to impart upon you a better understanding of the Hosts, as well as our initiatives to keep you and our city safe.

In the mid-70s, the first of the Parasites were accidentally discovered during unrelated lab studies and autopsies of infants. Even now much is unknown about the hows and the whys of this. Where did they come from? What were they? Why were they here? We may never know.

At the time, tests were done on the samples obtained, and the living children found to host them were studied extensively. Ultimately, nothing came of this work. The children behaved normally, and the scientists couldn’t determine the impact of the parasites. (It’s of course commonly accepted now that the Parasites themselves are much like the mitochondria – a part of the cell which was once its own organism, but now simply part of a larger whole. Ask your Biology teacher for more information.) As the children were shown to be healthy, the scientists ceased receiving funding. Of course, there were groups pushing for more money and research, namely academics and whinging activists, but neither companies nor the government were interested in giving their hard-earned money towards as nebulous a notion as scientific understanding.

As the years went by, doctors continued finding Parasites inside of children on the rare occasions when cellular testing was conducted. Not all children, mind, and not a particularly large number either. (Modern estimates place the percentage of children born as Hosts at between 0.5% and 2%.) The big revelation wouldn’t come until 1989 in Kansas. That was when the first Host as we think of them now came into the public eye.

Subject 0 developed a chitinous exterior at age 14, terrifying its mother and eventually leading to its death by gunshot wound. The police on-scene described deadly claws, spitting venom, and a horrible screech. Autopsy would reveal that the parasites had prompted rapid change in the body, having inserted themselves into their nuclei and rewriting the Host’s genetics into something only partly-human.

After the Origin Incident, a public panic broke out, inciting a statement from Reagan’s White House, bless his soul. Our government declared that it was looking into the situation, and that it was believed at that time to be a bio-weapon developed by the Soviets - still a popular theory for their origin today.

Many governments, led foremost by the USA, began to call upon the children who had been documented as bearing the Parasites, bringing them inside of government facilities for study and their own safety. Quickly it was discovered that every Host was different – some didn’t even look obviously monstrous. Many, in fact, could with minimal effort appear to be merely human, like you and me.

Even as the Soviet Union and its threat of communism dissolved, America still had many enemies within – the Hosts, the Muslims, and of course in some states the fags. Though there were never mass-scale tests made to identify whether children were Hosts due to a lack of equipment and funding, such tests were rolled out to more developed areas, where testing children became the norm.

Of those children who are found to carry the Parasite, the parents are offered two options in the interest of public safety. They may sign a contract with the government, allowing their child to be part of our Young Heroes program, or they may euthanize their newborn. It’s a hard choice, but it must be made.

The Young Heroes program is an initiative to keep young Hosts from getting into crime, and instead becoming productive members of society. It also happens that they make for willing test subjects to better our understanding of Hosts and their abilities, as well as a police force to be sent out against criminal Hosts, keeping human officers safe from the dangers.

Thanks to this program, not only are we able to protect the average citizen from Host terrorism, but our understanding has also grown. We’ve found that, as a Host child develops and begins to reach puberty, this is when the Parasites begin interfering with their genetic makeup. Brain scans have even shown that foreign tissues begin developing inside of their brains, priming them to interface with their new powers. Just imagine that thing, crawling around in your head. Chilling. It is currently believed that there is a link between a Host’s development and psyche, and the form in which their Parasite manifests.

There exist similar initiatives to Young Heroes in our Diamond in the Rough Outreach Program (DROP), which rehabilitates young Hosts who are willing to change their ways, and sending them on-mission with squads of special forces agents, Young Heroes, and other members of the program, so-called “Anti-Heroes” by some. The program allows for diamonds in the rough to be found and cherished, and also provides their parents with a respectable stipend. This comes the small cost of the Host living on our compound in order to keep them from negative influences, as well as taking regular tests. Misdemeanor is of course, punished appropriately.

You also surely know of the Department of Heroes established in the last decade, for adults who graduated out of the Young Heroes program. They are deployed to maintain justice in the face of Host-involved terrorist situations too dangerous for our Young Heroes, and are stationed in major metropolitan areas around the country, like our own fine city.

A few corporations have also sprung up to offer employment opportunities for Hosts, striking up official deals with the United States military to keep things above-board. These private organizations take Heroes on as contractors, and while their specific practices may vary, you needn’t worry. Our troops vet each and every one.

Unfortunately, a great many Hosts do not become Heroes. These are Villains – those who act in defiance of the law, and pose a threat to public safety due to lack of oversight. Even a Host with seemingly mundane abilities or intentions is often tied to a group of other Hosts. While it is tempting to see these groups as merely misguided children, we urge against this – they are super predators who are connected to larger networks, they are engaging in illegal activity, and they are a danger to our communities. They are paramilitaries, not playmates.

Villain groups tend to partake in claiming sections of a city to be their territory, establishing themselves as some perverse idea of law. These factions often clash with each other, taking government and private property as collateral damage. Additionally, some civilians have been harmed in such conflicts. We are increasing our community policing efforts to help curb this anarchy.

Reports of any Villain communes or independent states are completely fabricated – there is no secret society of these fiends living apart from the rest of us. Merely dogs in our streets, which must be brought to heel. Just as we fight terror overseas, we must fight terror at home.

And lastly, If you believe you have witnessed Host activity in your area, please contact your local law enforcement. We must keep each other, and our cities, safe, for the future of our children, and of humanity as we know it.

thank u commissioner greer for this informative and honest report on this ongoing threat.

i was taking notes for a new thing i’m working on its some novellas / serials probably and decided to make them within the world and then i actually liked them and decided to share. probably gonna keep writing little within-the world things and putting them here, probably drawings of characters or sumn too

Brown has served the SJPD for a decade, and is survived by his wife, Marnie, and their two children. He will be honored at this weekend’s monthly True Heroes Memorial Service, held as usual by Susanne Greer.

Brown was responding to a disturbance call this Friday, after receiving multiple reports of suspicious figures loitering behind an apartment complex. He approached the scene without a partner or proper backup, against current guidelines, officials say.

Gunshots were heard around 11:20pm last night, according to witness accounts. Brown’s time of death was estimated to be 11:25pm, officials say. Witnesses alleged that the suspects were seen taking a photograph after the murder, using Brown’s police cruiser as lighting, according to their accounts. “They didn’t even turn off the sirens,” said local man Alejandro Guzman, “They could’ve at least let us go back to bed, man.”

Based upon graffiti found at the scene, officials currently suspect the B-Class Villain team known as “The Graveyard Shift”, according to reports. These Villains are believed to be responsible for $50,000 in damages and over a dozen wounded or dead police officers this year so far, according to police estimates. If you have any information on their whereabouts or activity, please send all tips to the San Javier Commissioner’s Office. 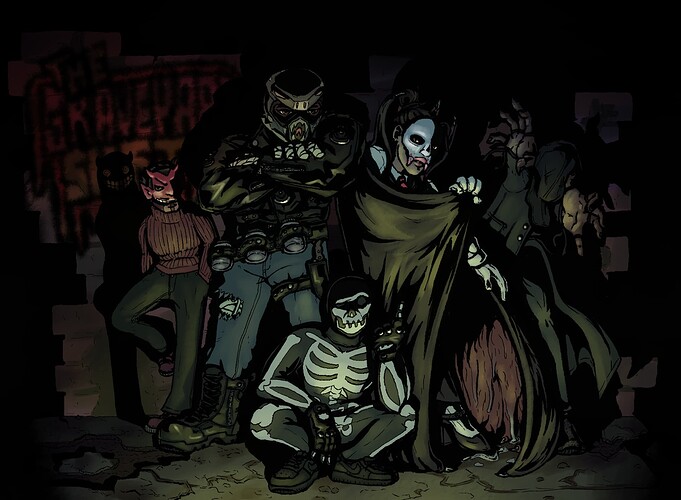 Started this illustration like, two weeks ago, and then got caught up in other stuff and couldn’t come back to color and finish it for a while. Finally had the time and energy today. Anyway here are my precious children, here to cause problems on purpose.