Making a thread for this on the new forums too. Haven’t updated in awhile, but on a whim I decided to write a clone of DROD, a pretty cool puzzle game.

current status, click to play in a browser: (if it black screened before, it should work now!) 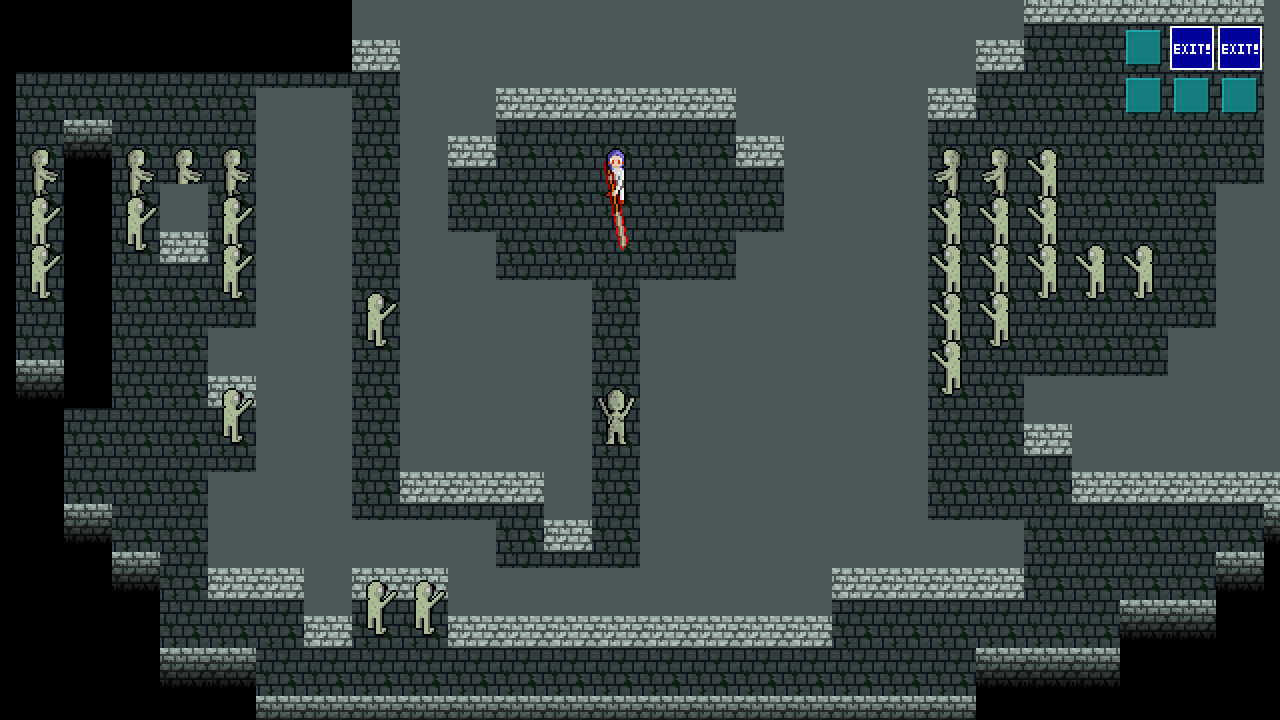 This is a learning project for me, so it’s more about the toolchain than the game. Refining a lot of little random things here and there, it’s working out pretty nicely. It’s written in OpenFL, which is a Haxe framework that exports nicely to every native and mobile platform, HTML5, and Flash. It’s pretty okay stuff, I’m working on a code chain that’ll let me nicely integrate with users of all platforms, but it’s going to take some time to get everything I need.

I hate all of the art in this, none of what exists is going to survive. Honestly it was all done on a whim anyway, needed a practice project and this was as good as any. Been off and on making attempts at new styles but nothing I feel like posting yet. Got some ideas on where to go from here.

More to come, some day. Who knows when.

edit: The thread over on Old Selectbutton

Nice work. I’ve always liked DROD, though I’m not very good at it. (Which is probably why I got stuck on the second stage of your game.)

Yeah almost everyone told me that the second stage was hard, because they weren’t familiar with diagonal movement or ways of breaking up groups of enemies. When I revisit the levels I will have an actual tutorial in place for that kind of stuff; I was just trying to copy stock DROD puzzles.

It actually differs from DROD here because enemies are sorted by distance from the player, so what you see is always what you get.

I told myself I wouldn’t update it until I made a new tileset for it, which I’ve made a few cracks at but I’m currently focusing on other aspects of learning to draw. Expect the next version to look, uh, completely different, when I get back to it. Which may be awhile because I have a really full plate!

The engine is basically pretty solid and I could add pretty much all of DROD’s own stuff pretty easily, but I want to diverge from it on a few points and do my own thing. A few goals I had in mind were:

Note I’ve cleared a few of the DROD games, so I’m not actually dissing on it at all, but I think I can do a take on it that’s more along what I want to see.

No update, as I still have way too many other things I’m working on that take priority atm, but I want to brain dump for the next dev phase.

Some other thoughts, but probably going to shut up until an actual game update comes.

if not zedz, then jiangshi?
hoppin is v. tile-friendly
then mayhaps variants of ‘can/only hop two tiles at once’, ‘every other turn’, ‘prioritize non-player goal’ (keep them from escaping???)

Yeah maybe Jiangshi. I’m going to learn to draw better before I settle on anything really.

As far as priorities go, it’s a puzzle game more than an action game, so I want enemy behavior that is both predictable and makes for interesting puzzles. Have to work on that a bit.

Original DROD had force arrows to control enemy and player movement. I kind of liked them and kind of thought they were a bit hacky.

Tutorials are something I need to think on more when I get this together. I think I’ll probably spend awhile trying to reinforce concepts early before moving on.

Still working on this off and on when my brain is functional. Today my brain is migrained up useless mush, so I’m talking about it instead.

Some stuff still left to do:

Aside from menus, this is basically code complete for the core game! Hooray! (and yes I know I’m ignoring some stuff that’s higher priority, but brains)

So the rules for drawing the map tileset! I decided that I wanted to have something that could determine what to draw based on the neighboring tiles, so that tile layers can have edgings created dynamically. I ended up with something like this:

In theory I could have this extend beyond single tiles, but for now this will do. This allows me to dynamically draw the entire tileset on the screen, no problem.

Some day I’ll get this done, I’m definitely overbuilding but I’m feeling happy about being able to re-use most of what I’ve done for other projects if needed. Particularly the roguelike part!

I got another blood potion for this today, thanks for the interest~ But! It’s also “Major milestone hit day”.

So I’ve been focusing on backend work on this off and on, currently:

Next is literally, uh, fixing that one bug and then making assets for everything(and better menus). Yay! Expect more months of nothingness.

Some gameplay thoughts, feel free to give feedback:

Setting/assets stuff that I’m pretty much set on:

Drawn objects in rules are animated and are sorted according to position within that layer. “objects” is shared with actual game objects. Making a new theme with modding is easy!

I still can’t get past the very first part of “Basics 2.” Moving diagonally is probably the key somehow, I’m guessing.

Oh, interesting. It almost seems as if that shouldn’t work in the execution, even though it makes sense.

In recent builds, I’ve modified diagonal movement a bit. If you press down and then move to down-left or down-right within a few frames, it’ll switch your input to a diagonal instead of keeping you stuck with the single move. This works like an input rollback so if you switch to a diagonal it makes everything on the map hop for like two frames before resetting. (this is not on the playable build atm because I broke some gameplay)

Relatedly, gamepad also support added! And a button that you can hold to make it so you will only move diagonally no matter what you press, Shiren style. Did you know html5 supports gamepads? I didn’t!

I also learned the hard way that the game really needs to hammer in that diagonal movement is an Essential Technique from the getgo, so I’ll probably restructure maps around that.

I’m actually very close to the point of being able to do Real Game but I have not been able to work on it as much as I would have liked recently.

appeal that i’m not doing nothing, really

for more details, i’m poring into pixel art tutorials and learning to texture scenery things. the general plan on what i want is:

this is probably ambitious for someone who is not terribly good at pixel art, but i can give it a go. first pass is something tolerable, second pass will be for improvements/clean up.

i’m going to go back and redesign the enemies/character eventually. don’t want to do boring zombies anymore, thinking about replacements.

24x24 stone tiles, alternating to get a good feel for how a checkerboard set would look this way

yes i’m going to keep posting about this. i’ll probably change the topic when something actually important happens, this is kind of a ‘logging my own stuff doing’

colors are not final, color adjustment comes once i have the other tile types to fit them all together

Don’t apologize for updates! That’s what we come here for!

As far as your tiles go, they look nice. The palette is real nice. It took a minute to see you have two tiles, alternating.

It reminded me of this thing which you might find interesting, but mostly it made me want to look it up again… https://en.wikipedia.org/wiki/Wang_tile

Not sure if I like this or the ones I made the other day more; this has more blades of grsas going on but I feel like that definition is more distracting than interesting. Maybe I should flatten it, or just go back to the other one…

next up: dirt, then color correcting the whole thing so they can all coexist and look nice doing so.

dirt tiles, I kind of like how these turned out but at the same time they definitely need some color adjustment.

And here’s what they all look like next to each other. Color adjustment is definitely on the way here. I think the stone tiles will get some tweaking to have less of that black filler space, because the ‘dark’ colors of the scene don’t look nice when filled in there and I’d have to add another one for it.

Transitions between the types are definitely on the menu, too.

edit: also i’m posting all of these at 3x scale because that’s roughly what they will look like ‘at resolution’ on a 1080p display.

that grass doesn’t look super readable because there’s too much focus on the individual blades over the larger plants so you sacrifice a lot of readability! the limited palette doesn’t help too much, you might consider finding a way to make the rest of the grass stick out more, or making the plants another tile altogether!