DO U WANNA BE IN MY GANG

Not pictured: me befriending a girl after playing Outrun…I didn’t know what love is until that very moment.

Yakuza 0 is pretty good. I played Yakuza 1 and had a good time. It was like an updated River City Ransom. I played a bunch of the sequels but their pacing sucked. 0 is good cuz it let me do karaoke real early and it has Space Harrier and Outrun. There is still too much fuckin talking and there’s no dub so I miss half the shit everyone says during cutscenes but it probably doesn’t matter.

Please talk about Yakuza, the nation of Japan, and the works and tan of Toshihiro Nagoshi in this thread.

Have you played all of them? Which one’s would you recommend? I played 1 and 3, but I havent finished 3.

I’m pumped for this because I dearly miss gamecube-era AV but I could never get into any of the yakuzas (I think I tried about an hour of 1 and 3?) or binary domain but this has been getting positive enough feedback that I’m going to go for it

I never finished the zombie one or 5. I have that game all downloaded but I can’t play it until midnight tomorrow

4 is the best! Zombie one is a mixed bag. 5 is good but the story switches and now I have to sing J pop songs though I did kill a bear. 2 is bad, 3 is alright but Sega freaked and took out all the fun

So far I’d say…just play 0. I am pretty sure I played all the sequels aside from 5 (which I will probably never play cuz it’s like 50 hours long) and I have, like, no memory of them aside from me sitting through cutscenes and going “holy shit shut up so I can get back to the arcade.” I quit on all of them very early, though if I remember correctly I mainly gave up on 4 cuz I needed money in “real life” so it’s probably the best sequel. 0 still has issues with pacing. I will never care about this real estate bullshit the whole plot revolves around. But the violence is pretty violent and I like helping all the losers in the sidequests.

I fuckin hate quests. I never want to see a quest log again in my life. I don’t wanna fetch x squirrel pelts, ever. But I do like helping people in video games. I love Link’s Awakening. I love all those damned weirdos and their stupid problems. 0 is giving me flashbacks to that. I wouldn’t wanna turn down helping any of these idiots.

But I do like helping people in video games. I love Link’s Awakening. I love all those damned weirdos and their stupid problems.

I really hate babysitting this little girl in this game. Is she in 4? In 3 he owns like an orphanage? I just wanna beat people up and get into wacky japanese gangster situations.

On the Discord someone (I think Drem?) said the girl ends up pursuing a career as a pop idol but if that’s in 4 I didn’t see it. I think you start off the game as a non-Kiryu dude, and I don’t think I got far enough to play as another character.

You run into a tough gangster gal in 0 and I want to play an entire game as her.

No, that’s 5. Haruka is one of the playable leads and has dance battles on her path to idol supremacy.

Or maybe that’s just the way of the Yakuza now: Dancing Violence.

Do any other JRPGs still do bizarro one-time mini games?

For me, 1 with the amazing US dub is great (fuck the haterz), 2 rules (like it has most of the shit they cut out of 3, plus two cities and a villain who is basically a KoF character). 3 feels weirdly edited because it is, and I didn’t finish 4, 5, or Of the End, but I will some day. There’s a Hinge Problems about this series.

But 0 is coming in the mail tomorrow with a silly business card holder and I am hyped. It better end with some dudes without shirts on punching the shit out of each other, because that is TruKuza Canon Ending for everything. And playable Yung Majima (with my only regret being that we will never get Mark Hammill to reprise his role)?

But that is why the orphanage and real estate shit and all of it are the best. Like they make being a Japanese gangster even wackier as hell. Like you gotta strong arm some dudes, but also solve kids problems with each other while fighting off the CIA, which is literally the plot of 3. I love this.

There was so much money in the bubble economy that it spills out of enemies like blood and you use it in lieu of EXP.

Guys, this game. It has so much.

The climax battle (and lead in to it) of chapter one, no spoilers, is some legit fist pumping, and kiryu just beats so much ass, but also then stops off for a bout of Outrun and it even has scanlines and oh god Sega. Sega.

update: they’re actually good companions to one another

Is this the one with Beat Takeshi, or was that the previous one?

You know I really like this game. I’m all about Japan with my recent purchases. This and Nioh. What I really love is how shitty I am at Karaoke. I think it really opens up after Chapter 2 but I’m only guessing. I do love the fighting styles and how beating people up earns you money. Poor Kazama his tattoo is unfinished…

I bet he gets it finished at the end.

And man, I am posting so much from this game on Twitter just because there are so.manu funny moments. I will try to share some here when I get a chance.

Takeshi is in 6, which came out in Japan last month. It also has the New Japan Pro Wrestling boys! I am looking forward to it.

I think this game is fuckin hilarious and am relieved to see other people echoing that sentiment. I could not care less about the main storyline. It is a fuckin snooze when these dudes go on about real estate. I refuse to believe anyone in Japan cares about this shit either. I assume they react like I would if this shit had a dub, all looking at their phones and half listening, waiting for it to end so they can go back to doing karaoke and eating food and making erotic phone calls and other shit they can’t possibly afford in real life. But all that side stuff is legit funny.

The Majima stuff isn’t nearly as funny as the Kiryu stuff though. I find this really interesting, cuz I’m not sure the writing is much worse. They seem to follow the same template. And I don’t understand a word of Japanese, so I don’t think I can fairly judge the performances. And these are Digital Actors. But Kiryu is a much better straight man than Goro. He just works in all these absurd situations. Maybe because he’s such a blank slate. Maybe it’s cuz he’s been the lead in like 20 Yakuza games and they know how to milk him for all he’s worth. Maybe it’s like OG Guybrush Threepwood is way funnier than cartoony Guybrush Threepwood. As far as I’m concerned Monkey Island 3 onwards don’t exist.

This game has really good food. Please share all your food screenshots.

The top one I shared on Twitter with the caption “Eat it FF15”, which is mostly because the attention to food details in ff15 really made me think that someone at Square fuckin’ loves Yakuza.

I could not care less about the main storyline. It is a fuckin snooze when these dudes go on about real estate. I refuse to believe anyone in Japan cares about this shit either.

I look at it like any mafia movie or whatever. The actual dealings (in terms of real estate) exist as much to forward the relationships of the characters as they do for themselves. So like in Chapter 1, the real estate shit is there to set up that Kiryu has to wail on some big old Japanese dude who took off his shirt* to try and get out of his main Dad-man getting in trouble for some shit he didn’t do. The real estate is just an excuse for this all to happen, and any excuse that ends up meaning Kiryu has to jump into a bathroom and wait for a dude to tuck his piece away before beating his ass is a legit excuse for me. 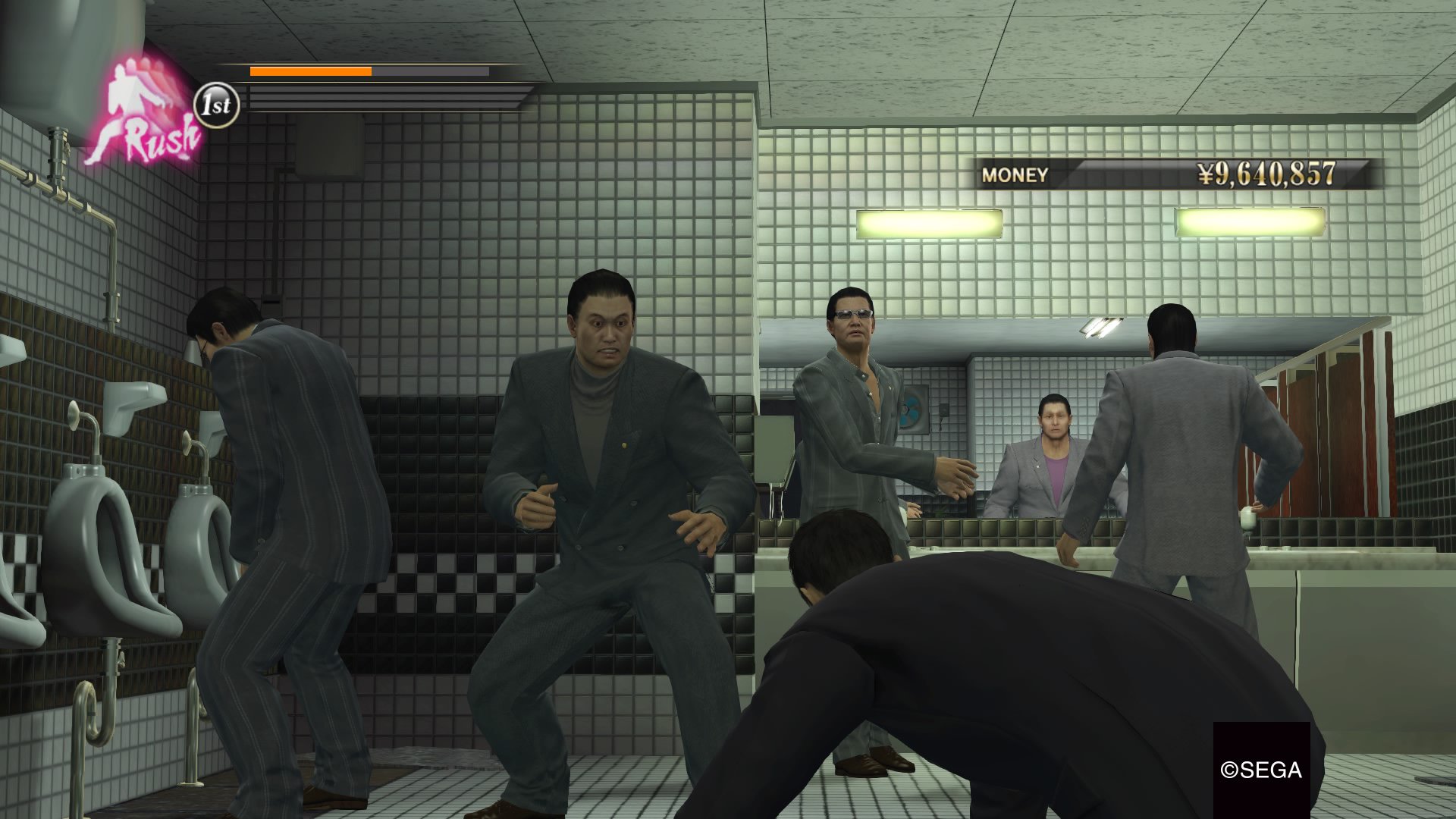 C2_FGRaWIAA6kBK.jpg:large1920×1080
See dude on left, tucking it away. also other dude was drying his hands off

*: I love the detail in this scene that is a straight callback to Yakuza games past (and I am sure other media about the Yakuza), because Big Bad Dude takes off his shirt, which is Yakuza game speak for THIS IS THE FINAL FIGHT BIG DEAL WOOOO (or you are in the arena, whatever), and Kazuma Kiryu doesn’t even try to take his off because this ain’t that kind of Situation for him. He’s just all “fuck that” and needs to beat some ass. 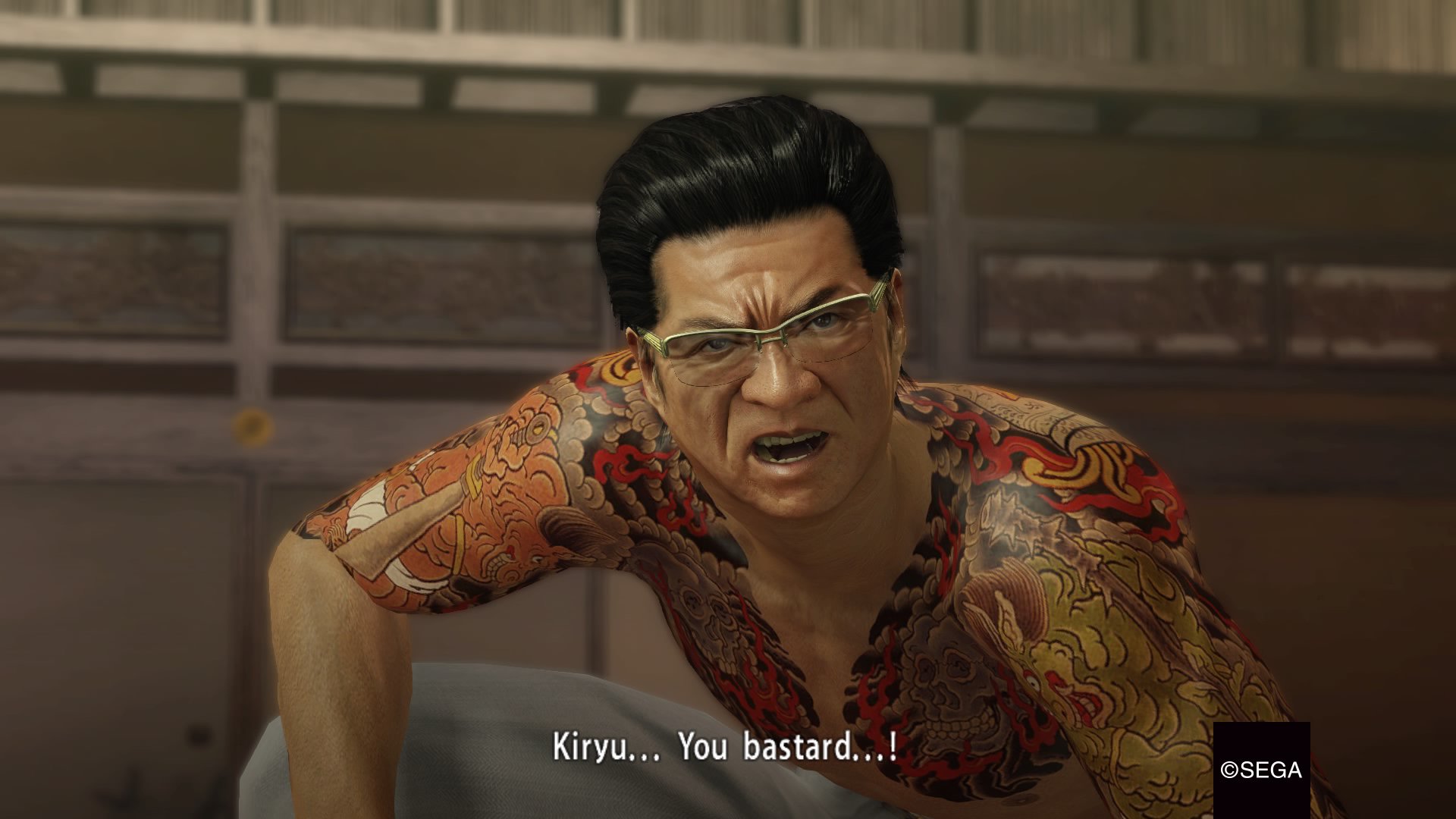